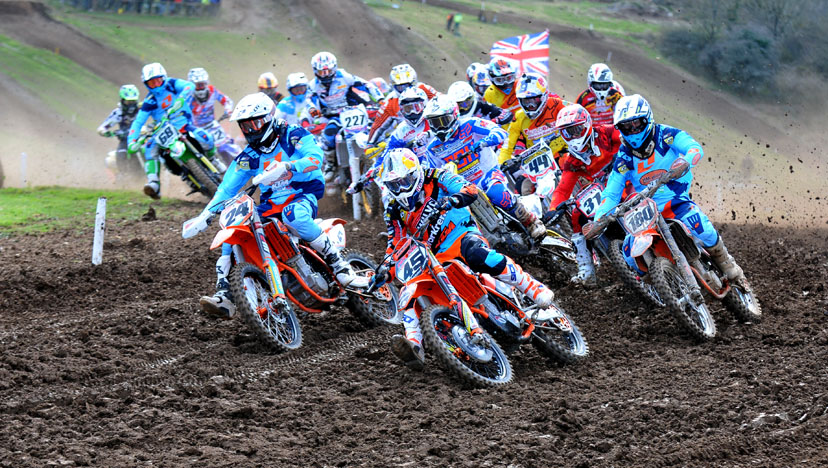 The opening round always seems to throw up a few surprises, as some guys come out and thrive off of the adrenaline, whilst others struggle in the spotlight. Evidently, this was the case at Landrake (the opening round of the 2014 Maxxis British Championship) yesterday, as some riders did not perform like we expected them to; a one-lined track  played a part in this too.

There was a lot of question marks surrounding the MX2 class heading into the new season, but now, following the action, we have more questions than answers! After the first two motos, all the talk centred around Matiss Karro; he was flawless for a majority of the day. The Latvian started his season in the best possible way, as he claimed the early lead in moto one from James Dunn and Mel Pocock. Mel lost two spots to Steven Lenoir and Steven Clarke initially, but he quickly moved back into third. Surprisingly, he just couldn’t get close enough to his Dunn to attempt a move – James stayed second for nine laps.

Lenoir followed Pocock around Dunn one lap later, and actually kept Mel honest right to the finish. In the end, Karro rode to an unchallenged victory from Pocock, Lenoir, Dunn (who had a brilliant ride), Clarke, Bradshaw, Barr (who stalled the bike when he was on the cusp of the top five), Dougan, Trickett and Sterry!

Mel Pocock grabbed the holeshot in the second MX2 encounter, but his lead was short-lived, as Matiss Karro stormed around him immediately. Pocock actually lost a spot to Jason Dougan on lap two, too, and didn’t get back into the runner up spot until lap five, which allowed Matiss to establish a gap at the head of the field. Ben Watson was the man on the move towards the end of the moto – he moved up from eighth on lap one to third at the finish! In fact, he was putting the pressure on Pocock for second towards the end! Mel did get hit in the mouth by a rock, which knocked his teeth loose, so he was a bit conservative.

Matiss took a commanding win in moto two, as his gap was twenty-two seconds at the end, Pocock and Watson were next across the line, whilst Dougan, Lenoir, Bradshaw, Trickett, Sterry, Dunn and Tombs rounded out the top ten.

Although the race for the lead was uneventful in the opening two MX2 motos, the third and final race was very intense – the top six were separated by seven seconds! Bryan Mackenzie took the final holeshot ahead of Pocock, Karro and Ben Watson. Watson made a mistake on lap one when he collided with Lenoir, which put him back in the field; he then fell again, which left him with a lot of work to do – he salvaged one point at the end. Matiss took the lead on the third lap, and looked set to runaway from the field again.

However, the Wilvo Forkrent KTM rider slid out in a corner on the fourth lap,  and dropped down to fifth. He was back into second within four laps, and making another run at Mackenzie. Karro got a little bit impatient though, and crashed again when trying to attempt a pass. This one really hurt him, as he slipped down to seventh and could not move forward before the end. Mackenzie held on for the win up front, ahead of Lenoir (the Dantec Husqvarna rider had a great ride), Pocock, Sterry, Trickett, Bradshaw, Karro, Dunn, Waterman and Dougan.

In the end, Matiss’ late race fall cost him the overall, as Pocock claimed the win on the day following three consistent rides.  Karro was tied on points with him, but was handed second overall, because he had a worse result in moto three. Lenoir rounded out the overall podium in third.

Unsurprisingly, the MX1 class came down to three riders; Jake Nicholls, Shaun Simpson and Kristian Whatley. These three riders were the class of the field all day long, and were a part of some superb racing. Nicholls took the early lead in moto one, ahead of Whatley and Elliott Banks Browne. Graeme Irwin was up front too, but had a huge crash on lap one, and damaged his ankle. Simpson quickly moved into third, but he didn’t have anything for the top two, as he kept losing time.

Although Nicholls and Whatley were very close, Kristian wasn’t really close enough to attempt a pass for the most part, although he did pull right onto Nicholls’ back wheel in the closing stages. However, a backmarker got in his way, which scuppered his chances. Jake went on to take the first MX1 win of the year from Whatley, Simpson, Banks-Browne, Anderson, Carless, Watson, Shipton, Law and Snow.

Shaun Simpson and Jake Nicholls got out front early on in moto two, but Jake ran off of the track on the tabletop before the finish, which pushed him back down to fifth. With a clear track, Simpson ran away from the field to claim the second moto win by twelve seconds. Nicholls eventually got back to second at the finish, ahead of Anderson – Brad had great ride! Banks-Browne was fourth again ahead of Whatley. Kristian had an awful start, and spent the duration of the race moving through the field.

The third and final MX1 moto had the potential to be great, as Simpson, Nicholls and Whatley started together at the head of the field. Unsurprisingly, these three left pulled away quite quickly – no one had anything for them! For the most part, the three leaders were evenly spread out, so there were no passes. However, Kristian did move into second on lap eight. Interestingly, Nicholls admitted after the race that he backed it down to salvage a third, as the track got quite dangerous, so that is why he dropped so far back. The top three ended like this, as Shaun won by just a couple of seconds from Whatley, Nicholls, Banks-Browne, Anderson, Krestinov, Snow, Irwin, Shipton and Law.

With two moto wins, Shaun Simpson took the overall win, and has a three point lead over Jake Nicholls heading into round two at Lyng in three week’s time. Kristian Whatley rounded out the overall podium in third, thanks to his three consistent results.