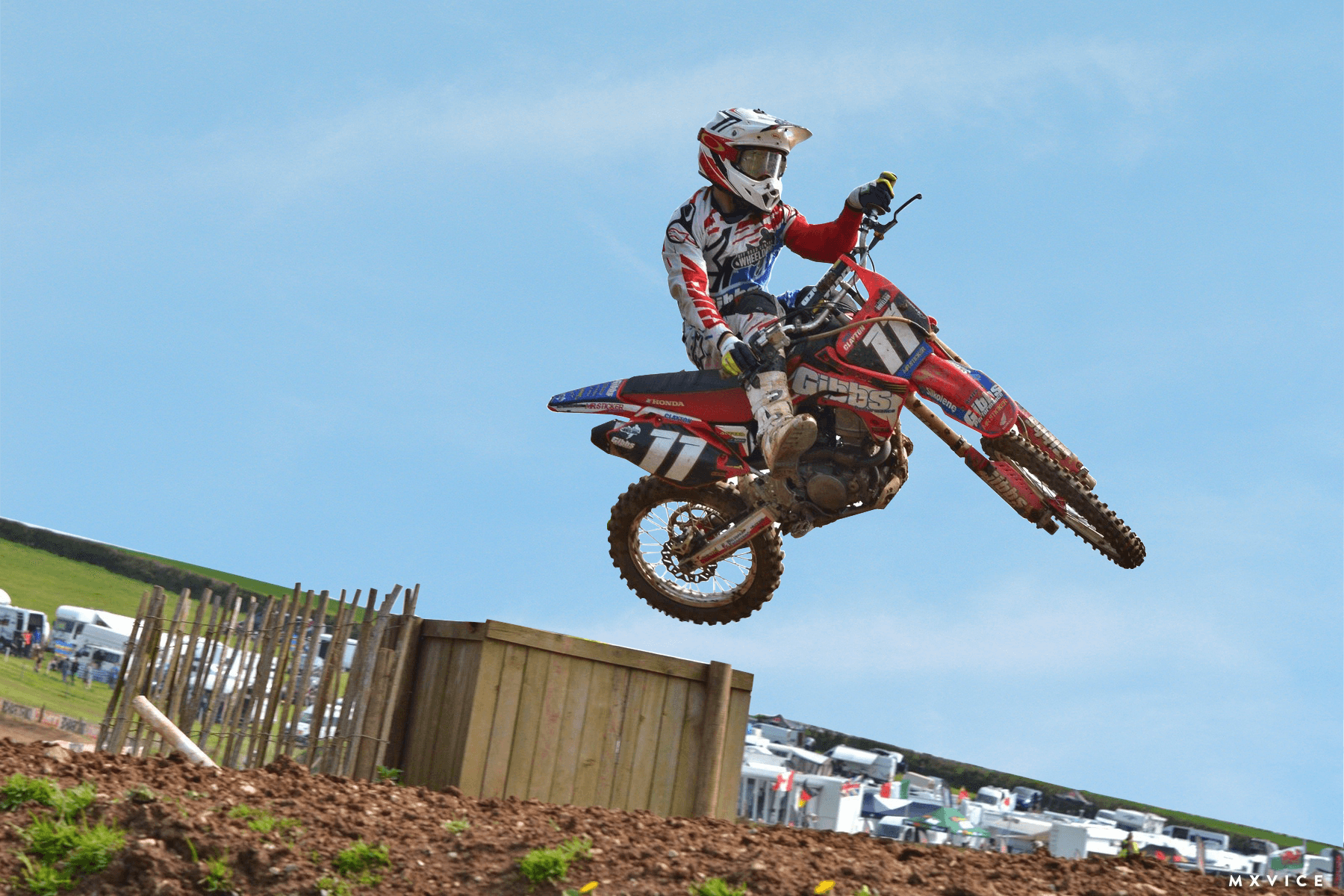 The great, natural flowing circuit of Landrake would play host to round three of the Judd Racing MX Premier Cup. With the weather set to be a scorcher, the track was watered well and in great shape.

Kicking things off with the autos. These guys are awesome – they want to win bad! They will give it their all to cross that line in first. The top three of Haddock, Stevens and Kelly would all finish up close on points. The five races were won by Haddock and Stevens, meaning the overall would likely go to one of these two. Stevens entered the Sunday meaning business, taking an early lead. However, he would fall and this would ultimately cost him the win as Haddock was able to cruise to an easy win. It also gave Haddock the confidence to win again later on in the day granting him the overall.

By looking at the results it looks like the Juniors was fairly one sided. However, that wasn’t the case as Ollie Colmer and Baily Johnson would go hammer and tong in every race. Once a move was made the other would try and respond straight away – it was awesome to watch these kids, no older than ten, battle so hard on the track. Colmer was the one who would come out on top over the first four races of the weekend, but Johnson made it happen in the final moto, proving that he does have the speed to overcome his rival. Colmer would take the overall, followed by Johnson and Beaney would round out the top three.

Continuing to dominate Jack Grayshon was on another level in the SW85 class. His starts were on point and he would then clear off in to the distance. He won all five motos convincingly and would therefore be given the overall. Jack Scally was consistent all weekend and would finish in a comfortable second overall. Then the fight for third was intense as there would only be six points that separated the next three riders of Brown, Sedwick and Jago.

The ’32’ of Callum Mitchell was pretty dominant also in the BW85 class, winning four out of five races. A slight hiccup in the third moto cost him, as he would cross the line in third. The fight for second overall was close between Louis Thomas and Danny Clarke with Thomas just getting the upper hand by a margin of four points. He was able to win that third moto which is what made the difference in securing second overall. I would also like to mention Ben Clayton, who was second in qualifying but had a torrid weekend only finishing two races and only scoring fifty-one points out of a possible two hundred and twenty-five. He certainly has the speed and will be looking to have a better weekend at round four.

The 125 class is starting to look like a two-horse race between Corey Hockey and Ashley Greedy. The two have won multiple races this season and are the class of the field. However, we haven’t really seen the two go head-to-head yet, as it has been a case of who starts better and doesn’t make the mistakes.

This weekend it was Hockey who had the upper hand and a poor second moto for Greedy really cost him any chance of the overall. Hockey would find the top step three times and in the other two races would still be in the top three meaning that he is now the championship leader and will look to extend his lead at Fat Cat Moto Parc.

The ‘Rookies’ class has been dominated by Howard Wainwright so far. He suffered his first defeat of the season, however, in race two when he hit the gate and had to charge from behind. He managed to get up to fifth place, but ran out of time to climb further up the field. Another poor start would cost him on Sunday morning and he could only recover to second. Joe Eiffert was second overall, with a string of good solid results, with Aidan Williams in third, who actually won the second race and that certainly helped him in the points standings.

Finally, the Clubman class had some new faces up the top with Josh Gilbert taking both race wins on the opening day, but he wouldn’t be staying for the entire weekend. This opened it up for Luke Burton who dominated the Sunday winning comfortably and therefore being granted the overall ahead of Chris Blamey and Joe Clayton.

Round four of the Judd Racing Premier Cup will take place at the glorious facility of Fat Cat Moto Parc on the 22nd / 23rd of May. It’s sure to be another great round.