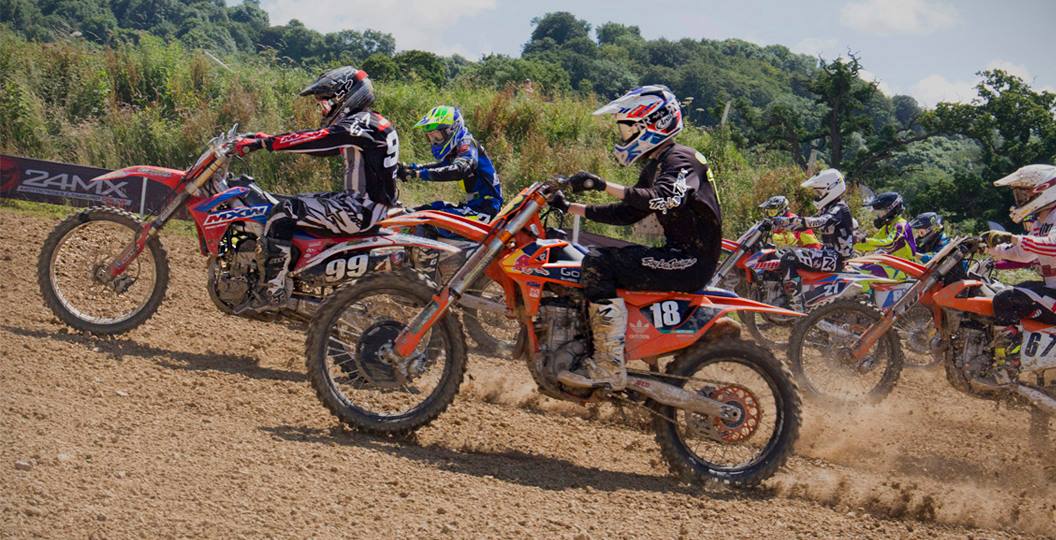 The penultimate round of the Judd Racing MX Premier Cup was held at the natural, flowing circuit of Brookthorpe. With the weather scheduled to be a bit hit and miss, everyone had their fingers crossed for a dry weekend.

We will start with the Rookie’s class. All eyes were on championship leader Howard Wainwright. He entered the weekend a massive two hundred and forty-three points up and could wrap up the title this weekend. Things did not start well, however, as in the opening race his rear-wheel adjuster came loose and jammed itself in the front sprocket. This resulted in a DNF and he was then playing catch up all weekend. Taking the honours on this occasion was Harry Pritchard, who won the overall by just two points over Josh Greedy.

Jake Curtis Stevens had solid speed over the weekend, but was unlucky not to find the top step in any of the races. He would finish third overall, with Josh Bunter in forth and Curtis Griffiths in fifth after a good weekend. After his opening race mishap, Wainwright recovered with two second-place finishes and two wins for sixth overall. That gave him just enough points to wrap up the championship a round early.

The 125 class is unbelievably close heading into the final round, Corey Hockey and Ashley Greedy really have been on fire all year. This weekend though it was Greedy who had the upper hand, as he took a perfect sweep of all five races. That’s not to say that he wasn’t challenged, Hockey had the speed to stay with him, but if Greedy could get away it was game over. The two came together in the second race and this resulted in Hockey falling and he could only recover to seventh place. This result gave the number eleven machine of Lewis Dowdeswen a chance to sneak second overall. Greedy now takes a four point lead into the final round.

Freddie Barlett was the man of the moment in the Autos. He was not only fast, but consistent also as he would not finish outside the top two all weekend. William Haddock was the only guy that was able to challenge Bartlett, as he was able to take two race wins. However, it was his first race that took him out of contention for the overall; mistakes in the race meant that he could only manage eighth place. Spike Stevens was solid for third overall, with some great rides and some awesome battling early on in the races. It’s cool to see how hungry these guys are and they will keep the battle rolling onto the next round.

Bailey Johnson was unstoppable in the 65 class, as he dominated all five races taking maximum points from the weekend. A great weekend for Joshua Bassett as he constantly improved through the five races and ended the weekend with three second-place finishes. The fight for third overall was tight with just four points separating three riders. It was Lewis Roden who would finish on the final podium spot after a hard weekend racing, with Rhys Hawthorne in fourth and Jake Randall in fifth.

It was a near-perfect weekend for Jack Grayshon, as he only dropped two points. He now takes a commanding lead into the final round where he is surely going to wrap up the 85 Small Wheel title. Interestingly the only person who was able to beat Grayshon was Jack Scally, who didn’t finish in the top three in any other race. Instead those positions went to Sam Atkinson in second and Harrison Mccan, who rounded out the top three.

A couple of big names paid visit to the Big Wheel class this time round, with Lewis Hall and Dominic Lancett taking control of the event. Just five points would separate the top three as Lewis Hall would win the first two races and Lancett would take the next two. The championship leader, Callum Mitchell, had a great ride in the final race proving that he has the speed to run with the best of them. He was in a race-long battle with Lancett, who would fall late on and eventually leave Mitchell to take the win.

The Clubman class had a few fresh faces, with the AMCA top guys paying a visit to the championship. James Dodd took the honours after a few good races with Luke Dean and Lewis King. Interestingly the two championship leaders of Rob Wood and Jack Bas struggled. Wood only managing sixteenth overall and Bas was down in eleventh. It is, however, good for the championship, as the gap has closed and will make for an interesting weekend at the final round of the series.