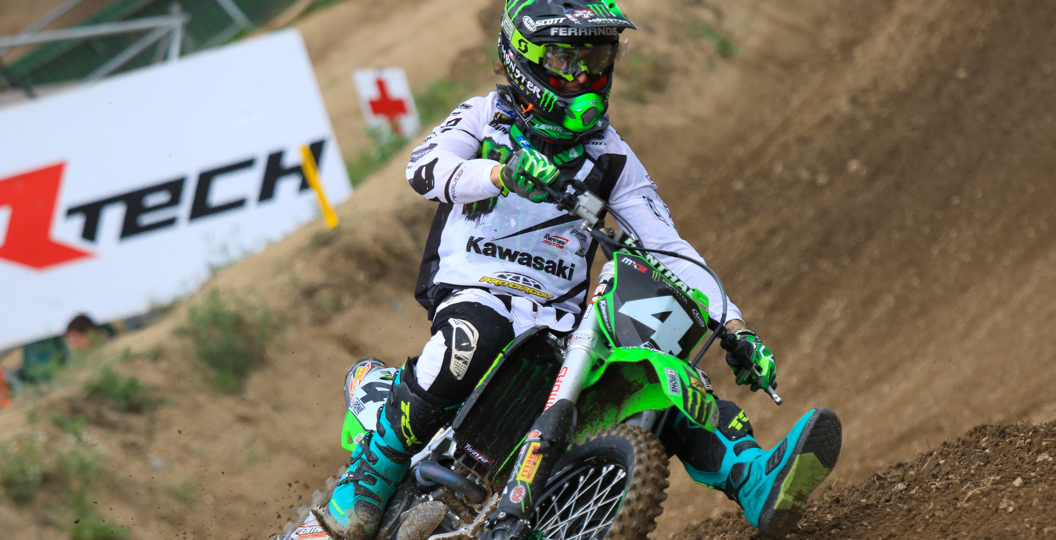 We understand that a lot of you are probably out and about, rather than glued to your television and watching every second of each moto. That is why we debuted this new-look race report, to help if you are in that situation. We’ll post the full results here, following each MXGP and MX2 moto, and a handful of bullet points that cover everything you need to know. Simple, right?

– Pauls Jonass took the holeshot in this one and looked good through the early stages, but had a horrific crash on one of the downhills and was taken away on a stretcher. It sounds like he is alright, but suffering from a nasty headache.

– Dylan Ferrandis took control of the race at that point and won by three seconds over Max Anstie. Anstie was actually the fastest man on track for a lot of the race, but had to work his way forward from outside the top ten.

– Adam Sterry ran second early on, but ultimately dropped back to seventh. His speed and pace were good through the first half though, which is perhaps a sign of things to come.

– Benoit Paturel and Petar Petrov did well to charge through the field after mediocre starts. Paturel went from seventeenth to fourth, whilst Petrov moved from thirteenth to sixth.

– Calvin Vlaanderen appeared to have a bike problem, as he screeched to a halt along one of the straights, hence his finish. Jorge Zaragoza was seen receiving medical attention, so crashed out.

– Max Nagl led for a majority of this one, but had to defend the position from Tim Gajser for most of that time. It was a promising, and long overdue, ride from the German.

– Gautier Paulin led early, after taking the holeshot, but ended up crashing and dropping back to tenth. The bike changes he made overnight are paying dividends.

– Jake Nicholls failed to finish, supposedly due to an issue with his fuel line. He’ll be back out there in moto two.

– Brian Bogers took the early lead in this one, but soon gave way to Jeremy Seewer. Dylan Ferrandis took the lead six laps later and never looked back, so claimed the second overall victory of his career.

– Max Anstie was pressuring Ferrandis through the second half and actually made a run at him a couple of laps before the end. The two made contact and Anstie hit the dirt, so gave up the runner-up spot.

– Pauls Jonass and Jorge Zaragoza obviously didn’t start, because of their crashes in moto one, but what happened to Davy Pootjes? It sounds like he may have sustained a hand injury.

– When Tim Gajser took the holeshot in this one, most presumed that would be the end of the fight for the win. A small fall in the second half caused Gajser to relinquish the lead, however, and give Max Nagl a little cushion. Nagl took full advantage of that and stood atop the podium for the first time this year.

– Evgeny Bobryshev was hovering around the top five early on, but ended up clipping the rear wheel of his teammate and going down. The weekend was a turbulent one for the Russian.

– Speaking of the HRC squad, Gautier Paulin appeared to have some issues with his goggles. He was losing ground quite quickly and attempting to wipe his goggles a lot of the time, so presumably run out of tear offs.

– Jake Nicholls should have finished a little higher up than he did, but a quick stop in pit lane for a fresh set of goggles cost him some spots.