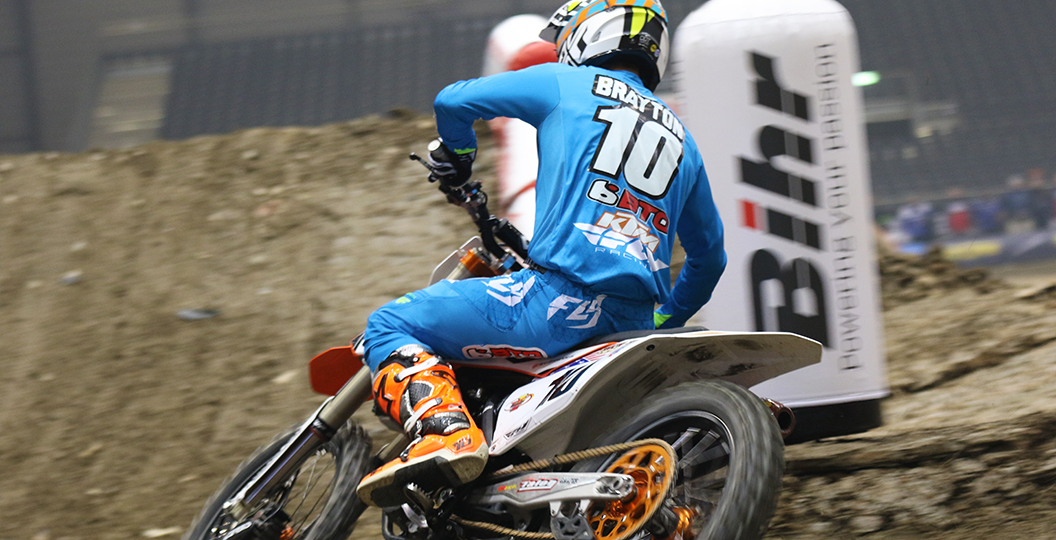 The thirtieth edition of the Geneva supercross has reached the halfway point, following the conclusion of night one. Famed for its atmosphere, tonight’s action didn’t disappoint as a reasonably sized crowd packed a portion of the Palexpo to watch Justin Brayton and Malcolm Stewart take on Europe’s supercross stars.

The schedule here is fairly simple, so track time is limited following opening ceremonies. The SX1 riders had two heats and then their main event – lap times are just over thirty seconds too! Unsurprisingly Brayton and Stewart won their respective heats in a fairly dominant fashion, which set the stage for the main.

Justin Brayton took the holeshot once the gate dropped and immediately sprinted off into the distance, using the quad in the rhythm section to his advantage. The BTO Sports KTM rider made an uncharacteristic mistake towards the end though, when he slid out in a turn and briefly gave up the lead to Stewart. Malcolm started third, but didn’t pass the fast-starting Valentin Teillet until the halfway point. He then benefitted from Brayton’s fall, but it wasn’t long before he had to hand the lead back.

Justin established a comfy gap, once he was back out front, that would see him take the win and move closer to a fourth Geneva crown. The American could potentially become the winningest rider in the Palexpo, depending on how tomorrow goes. It’s worth noting that his fastest lap in the main (a 32.657) was almost a second faster than anyone else.

Commenting after his win, Justin stated that “that was a good start to the weekend. Man, that race was interesting – it was fun to race Malcolm towards the end. I bet the fans loved it! I just had a small tip over – it was an error on my part. It’s going to be a good one tomorrow night.”

It was a battle of the Frenchmen behind them, as Teillet held a podium position until he was passed by Gregory Aranda on lap eleven. Gregory started fourth, but appeared to be on another level (compared to his countrymen) once he moved up a spot. Fabien Izoird was the man on the move, as he was buried on the cusp of the top ten early on before moving up to take a quiet fourth. Matteo Bonini finished fifth and progressed as the day went on – he didn’t look good in practice.

Valentin Teillet was forced to eventually settle for sixth, but had the third fastest lap of the race. The speed is there, evidently, although his fitness may need some work. Once he got passed by Malcolm he spent a lot of time looking over his shoulder. Another fan favourite, Valentin Guillod, finished eleventh after crashing on lap one. The privateer (for now) was the only other rider to do the quad in that long rhythm section, which was pretty impressive.

Night two will follow an identical schedule to today, but everyone is left wondering what they have to do to stop the ‘#10’. Right now he seems almost unbeatable, but these off-season races tend to prompt a few surprises.