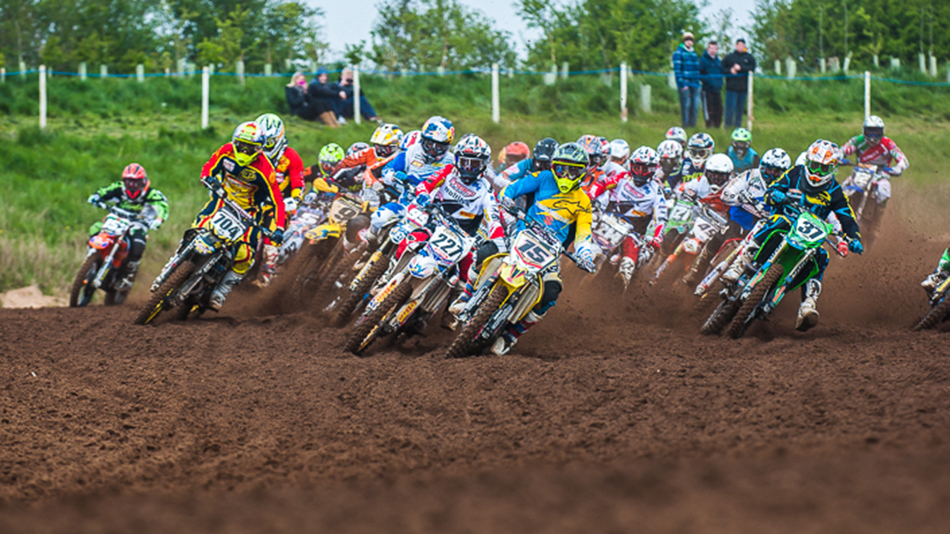 FatCat Moto Parc, in Doncaster, was the setting for round two of the 2014 MX Nationals this past weekend. Once again, great racing was witnessed by all, as a majority of the classes were thoroughly entertaining. Of course, the track got very rough by the end of the weekend, as you would expect, so it was a great test of both rider and machine.

Following multiple gate malfunctions, the first pro race started with a flag start, which was quite unique! Fortunately, it did not seem like anyone cheated, or attempted to get a bit of a head-start, as it was strangely fair, according to most. But anyway, when the moto did get underway, Elliott Banks-Browne took the holeshot from Graeme Irwin, and Kristian Whatley. Surprisingly, Nathan Watson (the series leader) dropped back in the early stages, he slipped down to sixth after starting fourth.

It did not take long for Whatley to move into second; he immediately started to chase after EBB when he got into the spot. But, Nathan Watson was the man that everyone was watching, as soon after this he started to claw his way to the front. It was as if he had flicked a switch; he disposed of Anderson, Irwin and Whatley with ease, before chasing down Elliott, and Gert Krestinov. Suddenly, EBB dropped to third at around the halfway point – it was as if he had hit a wall. It all changed in the closing stages, as Watson passed Gert and rode off with the lead with just a couple of minutes remaining.

Kristian Whatley took the early lead in the second pro race, which consisted of the fastest forty riders on that weekend. Nathan Watson started the race on the verge of the top ten, so it seemed unlikely that he would be able to claw his way through the field, and claim yet another moto win. It was not long until Whatley dropped to second, as Krestinov stormed through, and immediately attempted to establish a gap. Anderson followed him through, and got into second early on; the likeable Buildbase Honda rider was riding great in the opening laps.

Once again, Watson pulled the pin after a few laps, and stormed through the field. It was not long before he was inside of the top five. Nathan made a great move on Whatley for third at around the halfway mark, as he easily passed him around the outside in one of the sweeping turns. Soon after this, Krestinov went missing, as his tyre almost came off of the wheel. His team got this problem sorted after a few laps, but he was already buried too far outside of the points. It was not long before Nathan moved into the lead, and established a comfortable cushion.

Unsurprisingly, he once again claimed the win, and further extended his lead in the standings. Anderson ended up with a strong second, followed by Irwin, Whatley, Ratsep, Banks-Browne, Wilde, Tony Craig, Stuart Edmonds and Law. Bradshaw won the MX2 class in this one, from Bryan Mackenzie.

The track was extremely rough by the time that the third and final moto rocketed out of the gate. Elliott Banks-Browne took the holeshot, and the early lead, from Ashley Wilde (who was riding brilliantly throughout the weekend) and Nathan Watson. Priit Ratsep had a brilliant first lap, as he moved up into second, behind EBB. Watson rebounded and moved into the runner-up spot soon after this though. However, after making a run at Elliott, he visibly slowed with what seemed to be a shock issue. This allowed Krestinov to move around him, and into second; Gert was seemingly the man on the move.

Unfortunately, Elliott Banks-Browne crashed hard in the second half of the final moto, after getting wiped out by a lapped rider. EBB obviously did not finish, as he hurt his shoulder and cut his face up. This incident handed the lead to Krestinov, and the Estonian did not give it up, as he claimed his first race win of the year. Watson finished second from Ratsep, Anderson, Irwin, Whatley, Wilde, Moffat, Mackenzie and Bradshaw. Nathan ended up taking the MX1 overall win from Ratsep and Anderson. In MX2, Mackenzie won the overall from Bradshaw and Dougan.

The third round of the inaugural MX Nationals series will take place at the brilliant Skelder Bank circuit in Whitby on the first weekend in May! Before then, most riders will head to the next Maxxis British Championship round at Foxhill this weekend.