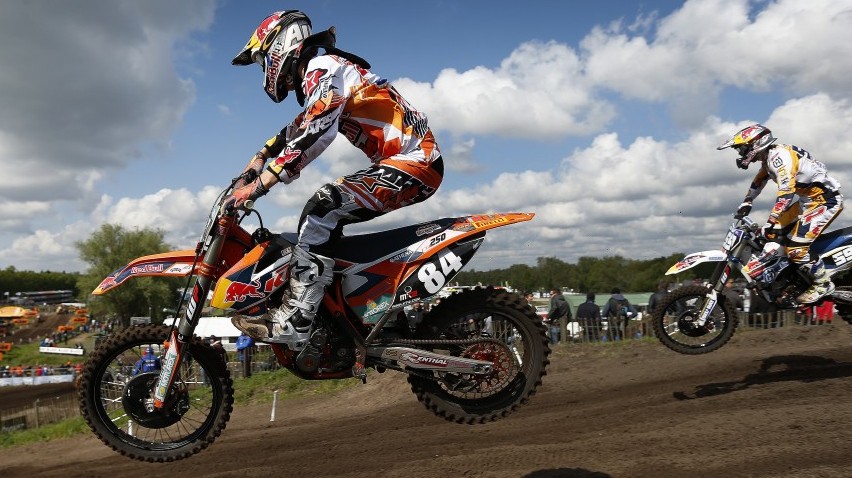 Race Report: GP of The Netherlands

VALKENSWAARD (The Netherlands), 04 May 2014 – Gorgeous bright blue skies and sunshine welcomed MXGP of The Netherlands today with open arms. While there was a chill in the air with a crisp winter breeze taking the edge off of the direct sunlight, Red Bull KTM Factory Racing’s pair of reigning FIM Motocross World Champions Antonio Cairoli and Jeffrey Herlings rewarmed the atmosphere with their impressive performances in both races to dominate round six of the FIM Motocross World Championship.

Red Bull KTM Factory Racing’s Antonio Cairoli continues to prove why he is the seven-time FIM Motocross World Champion. After breaking his front wheel early in race one the Italian continued to fight to the finish and remarkably managed to salvage third. In race two, the champ took his second Fox Holeshot of the day and went on to lead every lap unchallenged to stand on top of the box here in Valkenswaard for the fifth year in succession.

Fast becoming an MXGP podium fixture, Yamaha Factory Racing’s Jeremy Van Horebeek put in a couple more solid performances to land himself on the second step of the podium for the second time this year. “I was feeling good all weekend out there. I got good starts and I just rode my own race, I could have gone faster but then I would have made too many mistakes, like I tried to push and make up some time on Kevin (Strijbos) in the last race, but then I made a big mistake so at that point I knew I was second on the podium today, so I just let him go.”

Meanwhile raising the second Belgian flag on the podium of MXGP, Rockstar Energy Suzuki World’s Kevin Strijbos managed to turn up the heat in the second race to put a super sweet pass on his countryman Van Horebeek for second. With a fifth in race one and a second in race two Strijbos rounded out the top three. “I didn’t feel good in the first race, I made some changes to my set up and then I felt better in race two. I am just really happy to be on the podium today,” Strijbos concluded.

Rockstar Energy Suzuki World’s duo of Clement Desalle and Kevin Strijbos are stuck together like magnets this season. While Strijbos took home his second podium result this year, his teammate Clement Desalle rode two smart races for a trio of fourths (4-4, for fourth overall).

Another rider to verify that Belgian’s (like the Dutch) are great sand riders, J-Race Racing’s Joel Roelants rode like a man on fire in race two to pass Monster Energy Kawasaki Racing Team’s Steven Frossard for fifth with two laps to go. After finally banking a top five score, Roelants, who was eighth in race one, managed come home as the fourth Belgian inside the top five with fifth overall.

Race one winner Monster Energy Kawasaki Racing Team’s Gautier Paulin had a gnarly crash on the opening lap of race two which has left him with a suspected broken collarbone. Meanwhile two MXGP fan favorites made their awaited returns this weekend, Red Bull KTM Factory Racing’s Ken De Dyckerand CLS Kawasaki Monster Energy’s Tommy Searle. Both riders’ comebacks seemed a little pre-mature, but plaudits must be given to De Dycker for gritting his teeth and finishing the first race and half of the second race purely for the racing experience. Meanwhile Searle, at the last minute, opted out of a ‘pre-mature’ return withdrawing from both races after warm-up this morning.

On the note of injuries, the team at MXGP would like to wish a full and fast recovery to Team HRC’s Max Nagl, Red Bull IceOne Husqvarna Factory Racing’s Todd Waters and Rockstar Energy Suzuki Europe’s Glenn Coldenhoff who were all injured while training in the two-week break between MXGP’s round five in Bulgaria and today’s round six here in Valkenswaard.

It may come as no surprise to the majority, Red Bull KTM Factory Racings Jeffrey Herlings was right in his element here on a track so close to home he even went as far to say “this track here in Valkenswaard is like my back garden.” After winning both races with ease, ‘The Bullet’ wrapped up his fifth Grand Prix win of the year and took back the coveted MX2 red plate.

One rider to stand out with two very impressive performances at the front of the pack, Wilvo Nestaan Husqvarna Factory Racing’s Romain Febvre put all those laps around his team’s home circuit of Lommel to good use. Looking very comfortable in the sand, Febvre rode in second for 99% of both races only to make a small fault with less than 100m to go, not once but twice. Despite the costly errors, Febvre kept the bike on two wheels on both occasions to come home with a bitter yet sweet pair of thirds for second overall and his best finish of the year.

Red Bull KTM Factory Racing’s Jordi Tixier was looking in great shape in race one when he wasted no time in slicing through the pack to take over third. Once in third, the determined young Frenchman rode a relentless race, chasing down and passing fellow Frenchman Febvre with one turn to go to take second place. Unfortunately in race two, Tixier got off to a great start but fell under the pressure of his race one nemesis Febvre. After failing to re-group, the best he could do was fifth, which was enough for third overall and his second consecutive podium finish this season.

Another impressive performance is in the bag for Standing Construct KTM’s Swiss sensation Valentin Guillod. Guillod was riding an incredible pace in race one, but unfortunately a bad start ruined what could have been a podium finish this weekend. Nonetheless, the MX2 rookie should be happy with his performance, taking a fourth and a seventh for fourth overall.

Coming into MX2’s Grand Prix of The Netherlands, CLS Kawasaki Monster Energy Arnaud Tonus, who was carrying the red plate up until now, was realistic in saying he didn’t really expect to beat Jeffrey Herlings in the sand but definitely felt he was more than capable of two times second. Despite a disappointing race one which saw him lay his bike down a couple of times and only bounce back for twelfth, the stylish Swiss redeemed himself in race two with a spectacular pass on his teammate Dylan Ferrandis and Wilvo Nestaan Husqvarna Factory Racing’s Romain Febvre on the last lap for second in race two and fifth overall.