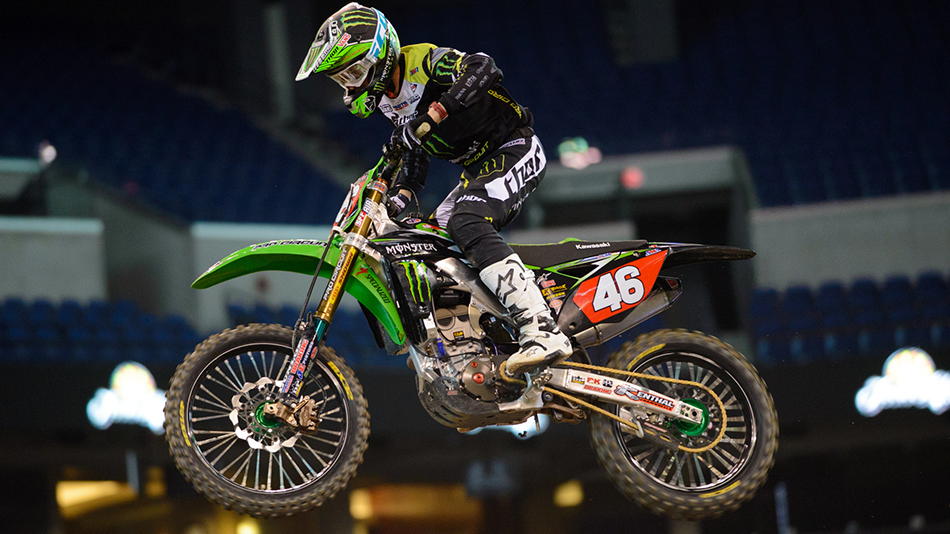 “The track was slippery tonight, so it was easy to put your bike on the ground,” said Stewart. “I pulled a nice gap in the middle of the race, but I let it go as time went on. It has been a while since I have raced here in Detroit, and it was an awesome night.”

At the end of Lap 1, Stewart passed Seely for the lead, and on Lap 4, Villopoto passed Seely for second place. After a small mistake before the finish line, Seely spun out, and Red Bull KTM’s Dungey made the pass for third place on Lap 8.

Stewart’s lead was 5.9 seconds after 10 of 20 laps and Dungey chased Villopoto, who had a 1.4 second advantage. Villopoto and Dungey finished second and third respectively and each have seven podium finishes on the season.

Stewart’s win marked his third at Ford Field, and he is the all-time leader at the venue. Villopoto has a 30-point lead over Dungey in season standings.

“I was able to get a good start tonight,” said Villopoto. “I made a mistake down the start straight but did regroup. It wasn’t enough, but I walked away with the points lead as we head into Toronto next weekend.”

Monster Energy/Pro Circuit/Kawasaki’s Martin Davalos led the field through turn 1 with the Nuclear Cowboyz Holeshot Award to begin the Eastern Regional 250SX Class Main Event. Cianciarulo and GEICO Honda’s Justin Bogle worked their way through turn 1 in second and third respectively, and on Lap 2 Davalos crashed in the corner before the finish line. This allowed Cianciarulo to take over the lead with Bogle in tow.

At the halfway point, Bogle trailed Cianciarulo by 1.1 seconds, and Davalos continued to have more trouble, dropping back to ninth place. Last week’s winner and Cianciarulo’s teammate Blake Bagget moved into third place, where he finished. Bogle finished second, marking the best finish of his career. Prior to tonight, Bogle’s best finish was a third place.

“This year has started off great,” said Cianciarulo. “This was a very nerve-racking race for me because if I made one mistake, I would have given the race away. Overall, it was a great race, but it is only the fifth stop of the season, and there is a lot of racing left.” Cianciarulo extended his points lead to 17 over Davalos.

“I am happy to be able to be out front and battling for a win,” said Bogle. “I hope to keep doing this the rest of the season and pick up that first win.

Monster Energy Supercross heads to Toronto’s Rogers Centre next Saturday night for the 12 stop of the 17-race championship.