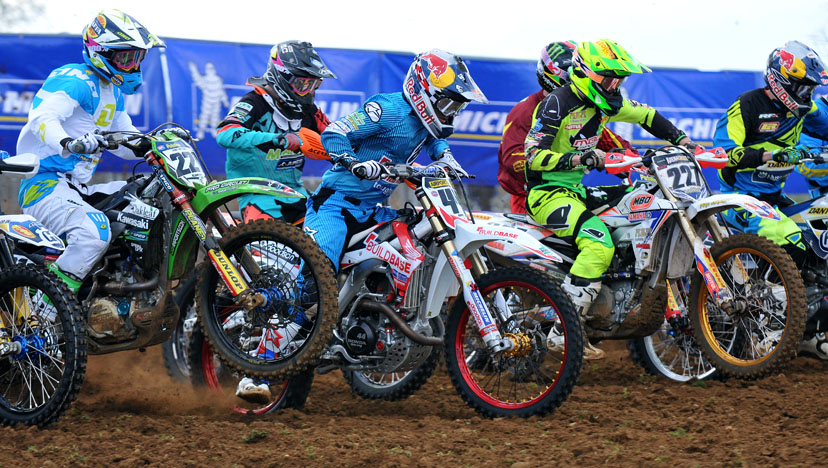 The all-new MX Nationals series fired into life at Culham this past weekend. Understandably, excitement was in the air, as all of the riders and teams present were interested to see what the championship had to offer. With some great racing, and a good crowd present, it was a promising start for everyone involved.

Elliott Banks-Browne and Kristian Whatley topped their respective qualifying sessions early on Saturday morning; it was those two sessions that decided who made it into the fastest forty! All of the top riders made it, fortunately, so there were no major surprises. James Rutter and Fraser Wakeford were the first guys to not make it in the two qualifiers. Max Anstie qualified seventh in his session. However, he did not line up for the races, as he was experiencing problems with the 2014 Yamaha, so he “went testing” according to some people in his camp.

Eventually it was time for the first pro class race, which consisted of the fastest forty. Kristian Whatley took the early lead when the gate dropped, with Banks-Browne and Nathan Watson giving chase. Watson got around Elliott within two laps, and immediately attempted to close in on Whatley. Kristian stayed strong out front though, and rode to an unchallenged win, as he crossed the line five seconds ahead of Nathan, with Elliott a further seventeen seconds back in third.

Gert Krestinov finished fourth, he moved up from fourteenth on lap one. Lenoir ended fifth, and was the top MX2 rider, ahead of Ratsep, Bradshaw (MX2), Anderson, Mackenzie (MX2) and Law. Martin Barr was inside of the top five, but dropped out with a mangled bike following a crash.

In the second pro race, the results were shaken up, as Whatley did not start following a shock issue on the sighting lap. With this in mind, Nathan Watson was certainly the favourite, so it was unsurprising to see him take the holeshot, and ride off into the distance. Within a lap, the Dantec Husqvarna UK rider had stretched out a two-second lead over Irwin and Banks-Browne. Lenoir dropped out early on following an incident with another rider. But, his mechanical problem was soon rectified, and he was out on-track again a few laps later.

Elliott Banks-Browne had a small issue at the midway point, and dropped to third, behind Martin Barr, which is how the top three finished. Watson ended up with an impressive ten-second cushion. Gert Krestinov finished in fourth again, just in front of Irwin, Bradshaw (MX2), Sterry (MX2), Ratsep, Craig and Trickett (MX2).

Kristian Whatley returned for the final pro race, and took the lead from Banks-Browne on lap two. Strangely, Kristian then dropped back in the following laps – he eventually finished seventh. EBB retook the lead, because of this, and went on to take his first outdoor win on the Buildbase Honda. Nathan Watson was all over him in the early stages, but lost some time as the race wore on. However, he must have known that he did not need to force the issue on the challenging track, as he had the overall win sewn up.

In the pro support class (full of the forty riders that did not make it into the pro class), James Rutter took the overall win, unsurprisingly, as he had two wins and a second in the three motos. Reece Desoer improved as the track got tougher – he won the third moto, and took second overall. Jake Gowan finished third overall, following a consistent weekend.

The 2-stroke class was arguably the most entertaining, as James Dunn and Lewis Gregory had some great battles in the four motos. Although they were quite close in speed, Dunn took all four race wins, and the overall victory, whilst Lewis finished second in all four. Damon Strydom was undoubtedly the third best 2-stroke rider, as he ended third in three of the motos, and finished fifth in the other, which was good enough for third overall.

Consistency paid off for the top two in the MXY2 class, as Liam Knight took the overall win, despite the fact that he only claimed one moto victory. Josh Gilbert took second overall, following a third, fourth and two seconds in the four motos. Unfortunately, Todd Kellett broke the L1 in his back in the final moto. However, despite the fact that he did not gain any points in that race, his two wins and a second from the other motos were good enough for third overall.

Brett Pocock rebounded from a fifth in moto one to take the overall victory in the Under 15 class, as a win and two seconds in the final three motos were enough to get the job done. Dylan Woodcock took the third and fourth moto wins, but he had a tough time in the first two motos, which hindered him in the overall classification. Alexander Brown was third overall, following a consistent weekend. In the clubman class, Ben Harrison dominated, as he took all four moto wins, and has a eighteen point lead heading into round two. Darrell Simms finished second overall, from Scott Meredith.