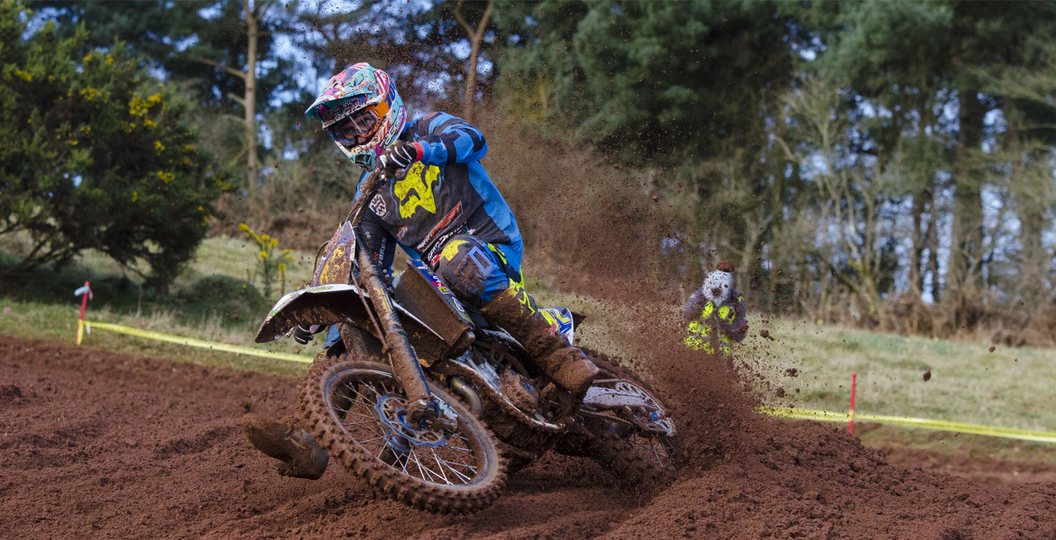 After blowing off the cobwebs at Long Lane, the AMCA Superclass series took to the rolling hills of Gloucestershire where the second round was held at Bromsberrow.

Thoughts going into round two was, ‘is it going to be cancelled?’ and ‘when’s the rain coming?’ Upon arrival the weatherman got it wrong, again, as the weather was chipper and the riders in the paddock seemed itching to tackle the track. Before practice took place riders walked, well climbed, the track – the thing was more of an assault course than MX track.

Practice and qualifying got underway with the Superclass taking to the track first and quickly creating ruts in the super soft sand. Familiar names took to the top of table quickly with reigning champ Richard Cannings, James Dodd, Jack Cox and current championship leader Luke Burton all setting the benchmark high. Heading straight into qualifying, outsiders of new boy Clinton Barrs, twelfth place championship man Adam Harris and the rider who sits fourteenth in the championship, Lewis King, threw a spanner in the works, knocking the fast lads from the top. As I barged my way through the mass of bodies in pit lane who were all huddled around two screens showcasing lap times, positions started to change.

Qualifying ended with the name on everyone’s lips from round one, Luke Burton, lapping at 1:19. That was a full three seconds quicker than second place man Jack Cox. The kid looked smooth and on point with his qualifying speed, making him the target man for race one. James Dodd (third), Adam Harris, Lewis King and Clinton Barrs rounded the top six off and were all within a second of each other.

Have you read our last report from Long Lane? Well, if you have you’ll know that the man on a mission in the Youth 85/150 series is James Hanscomb. With his slick edgy style on the bike, the kid was on form again during practice and qualifying. Like a swarm of bees around a hive, you can imagine what they sounded like tackling Bromsberrow’s steep hills, banks and cambers. With only half the time to qualify as the bigger boys, the young guns took to a very rutted track to throw down some laps.

As of previous, Hanscomb took the lead and stayed there managing a 1:34.8 – that was a full seven seconds faster than his rival in the championship Lloyd Duggan Thomas. As the clock struck down, the top six involved the same suspects with Harry Syson shredding four seconds off his best lap to take fourth. Oh, and he dropped his KTM on the timing corner.

The sound of music, or the sound of two-strokes, took to the start grid for the first youth race of the day. With every rider getting revved up bouncing up and down, slapping their helmets, revving the life out their machines, I stood there and thought ‘yeah, the first corner should be interesting.’ Holeshot man fell to Lloyd Duggan Thomas, with Hanscomb collecting his dirt in second.

The first corner was surprisingly a clean run, but again the devil that is the fourth corner struck again. Coming round on the completion of the first lap, Hanscomb was leading and gone, with a huge gap back to Duggan Thomas who settled in for second. By lap four Hanscomb was lapping riders and a full five seconds a lap quicker than second place; he was in a different league to the rest. Crossing the chequered flag, Hanscomb led Duggan Thomas and Matt Lloyd across the line.

Onto race two for the youngsters and Hanscomb again cleared away from the rest. A pile up in turn one saw Matt Lloyd get caught out, which knocked him back to sixteenth. Duggan Thomas and Harry Syson had sights on Hanscomb with no joy. Ben Evans and Lewis Glynn battled the whole race, chasing down Finn Corbijn in fourth. Syson then crashed, handing third to Lewis Glynn with Ben Evans taking Finn for fourth. Matt Lloyd got himself back to sixth across the finish, impressive, while Max Lewis brought home sixth. Ffion Jones, the only girl in the field on the day as Tegan Jakes Caddick was out, was shining pretty in pink gear came home in an impressive eighth.

The final youth race was the last on the programme, but the riders came out of the gates still raring to go. Duggan Thomas took the holeshot for the second time, but not for long as Hanscomb quickly took the lead going into turn two. Yet again that’s the last they saw of him. Harry Syson didn’t start after his fall in race two, while Ben Evans was chasing down Max Lewis for fourth; he binned it though and that was that. He still came away from the weekend with strong points.

Lewis Glynn then robbed Max of third and Finn Corbijn had a lonely ride in fifth. Hanscomb took three from three, with Duggan Thomas second overall. Glynn, Lewis, Corbijn and a surprise guest Ryan Lancelotte rounded out the top six. My most impressive ride of the day had to be Ffion Jones, chipping away through the day she came away with a tenth, eighth and seventh in race three. Massive congrats!

Overall the day was, shall we say, surprising in terms of weather, but awesome in terms of racing with some real stars showing the spectators that amateur racing is just an eye popping as the world stage.

The final round of the Superclass now moves to Shropshire, to the Condover circuit between Shrewsbury and Telford. You won’t want to miss it.