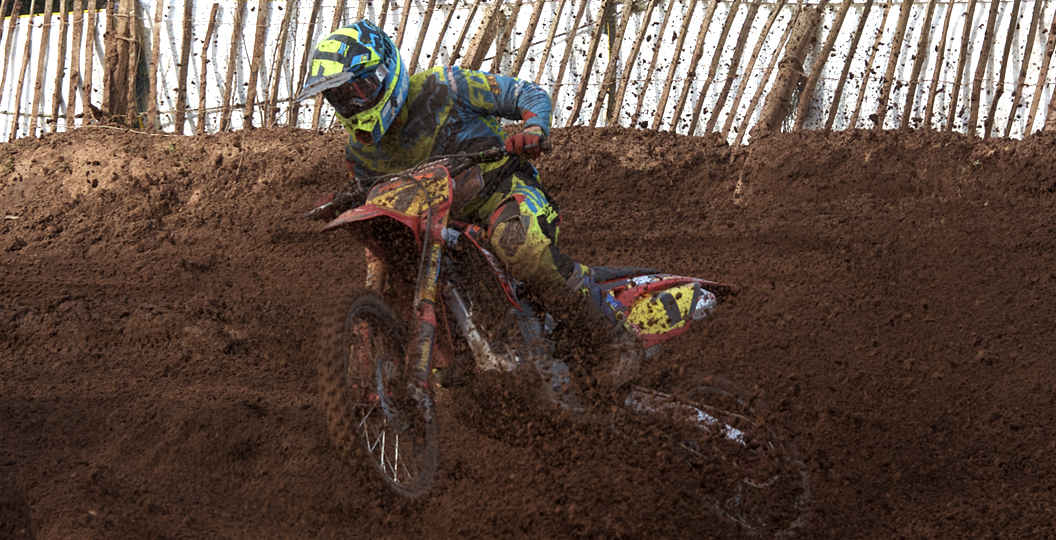 On paper it looks like Luke Burton had a dominant weekend at the opening round of the AMCA Superclass, as he swept all three of the races, but that wasn’t exactly the case.

After qualifying on pole, Burton struggled to get out of the gate in race one and found himself just inside the top ten early on. Jack Cox, the 2014 Superclass champion, grabbed the holeshot and started to skate away at the front with Ryan Crowder in tow. Crowder, however, made a costly mistake on lap three, which led to him eventually finishing in tenth place.

Meanwhile Burton was charging through the field and was up into second place by lap three, but he still had a lot of work to do. ’14’ immediately put his head down and started to pick away at Cox’s lead, which eventually led him to the final lap where he was applying some serious pressure. Thanks to a bit of help from lapped traffic, he was able to make the move on Cox and claim victory in the opening race. Jack would bring it home in second, with Luke Meredith third following a strong ride.

Bradley Tranter took the lead early on in race two, but then fell on the third lap and eventually retired from the race. This would hand the lead to Luke Meredith, who looked strong and determined to take the victory, but then misfortune would strike him also as a flat front tyre forced him out of the race. Cox then found himself in a similar position to the first race, but Burton was again chasing him down after another poor start. This time Burton would catch him with three laps to go, so took his second victory of the day quite comfortably. Cox and Cannings, the 2015 champion, chased him across the line.

Tranter, a fast starter, would again take the holeshot in the final race, but would eventually fade to eleventh. Again it was Cox and Burton who would work their way to the front and by the middle stage of the race they were running one and two. Burton made the move on lap seven and tried to get away, but this time Cox managed to hang with him; he seemed much more comfortable in the rough conditions.

Burton was under serious pressure and could not afford to relax as the yellow Yamaha of Cox was trying to make the move, but he just could not find the room. Burton would take the victory by seven tenths of a second. Cannings would again come home in third, after a fairly lonely ride. Burton took the overall followed by Cox and Cannings, with Andrew Smart in fourth and James Dodd fifth.

It was also the opening round of the Youth 85 championship this past weekend; James Hanscomb was the man to beat all day in that series. After taking the holeshot in race one he shot off into the distance, leaving his competitors to fight it out over second. His smooth riding style was similar to that of Jeffery Herlings in the sand and so was his winning margin; he crossed the line one minute and ten seconds ahead of the eventual second place finisher, Lloyd Duggen-Thomas. Harry Syson rounded out the top three on his CRF150.

Race two was looking like a carbon copy of race one as Hanscomb led Duggen-Thomas from Syson. However, Syson went missing on lap three and eventually dropped down the field to nineteenth. By that point in the race the field was too spread out and he could only recover to eighteenth by the end. This gave Finlay James on his KTM the chance to come home in third position.

In the third and final race the front two of Hanscomb and Duggen-Thomas would again escape and run their own race at the front. Meanwhile Syson, James and Corbijn were having a nice battle. Syson held third, but then James would slip through, as he looked to have a little more energy this late on in the day. Syson then came under fire from Finn Corbijn and dropped down to fifth midway through the race.

A late surge saw Syson regain that fourth place, but James was already too far gone so he had to settle for that spot. A dominant performance from James Hanscomb led to him taking first overall on the day, followed by Lloyd Duggen- Thomas, Finley James, Finn Corbijn and Ben Evans. That mistake in the second moto cost Harry Syson – he eventually finished sixth overall.

The Superclass now moves onto round two at Bromsberrow on Easter Sunday.