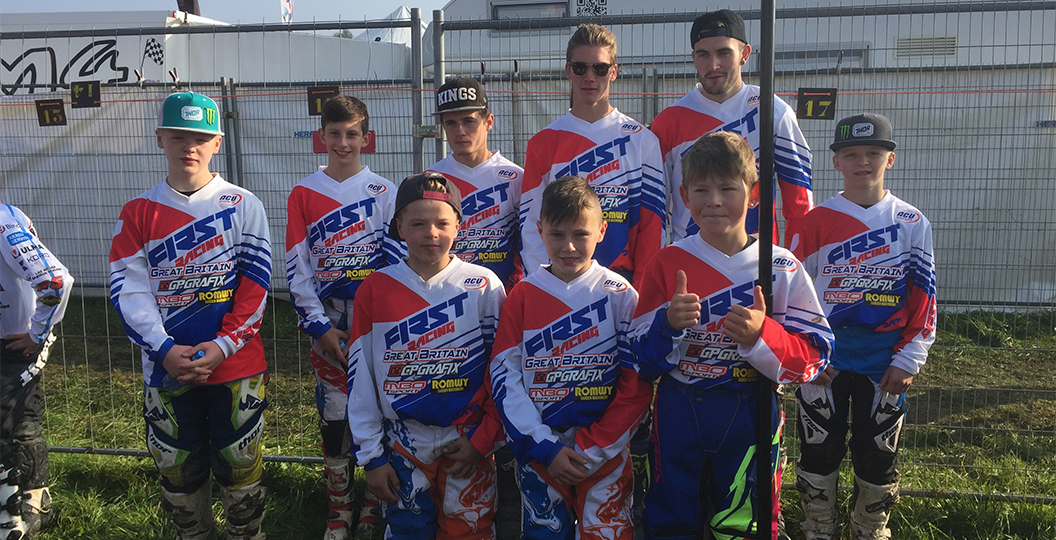 Lewis PhillipsOctober 6, 20150
It was a successful return to racing for the British Team at the 44th annual Coupe de L’Avenir, the prestigious under 21 motocross team race. After several years without a British team competing, Great Britain got back into the mix and didn’t let anyone down with a solid display.Racing on a technical, natural circuit in Baisieux, Belgium Team GB rode with heart and aggression to finish fourth overall in the team classification.

The Coupe de L’Avenir event is considered to be the ‘under 21 MX of Nations’ by many and is often graced with some of the best young talent in European motocross. Great names like Britain’s own world champions – Graham Noyce, Dave Thorpe, Neil Hudson and Jamie Dobb have all raced the event and other greats and world champions such as Gaston Rahier, Harry Everts, Andre Malherbre, George Jobe, Stefan Everts and Steve Ramon has also taken part. Since the start of the new millenium more future world champions have also raced; Steve Ramon and Jeffrey Herlings to name two. The event has a rich heritage, so it was good to see a full British team back in action.

Since 2006 the Coupe de L’Avenir organisers have also incorporated an 85cc team race, and then last year also added a 65cc race. So as well as the main and long standing three man main ‘Coupe’ race (125, MX2, MX1) there’s now the opportunity for countries to win the ‘Super Trophy’ where all nine riders scores count (65cc, 85cc, Coupe).

In the ‘Coupe’ class James Harrison rode a blinder, finishing third overall in the individual classification on his 350 Phoenix Tools Husqvarna, leading plenty of laps and really surprising a lot of people, including his competition. Liam Garland (MX Zone/ Turvey racing Yamaha) also raced a stormer. Particularly in the last moto where he finished fourth, digging deep after DNF’ing the second moto when he twisted his knee badly. Chubbie Hammond also battled with real heart and determination on his TM125 with solid results, running in the top five amongst the other 125 riders to help the three lads come home fourth in the their class.

The 85cc class was stacked out with incredibly talented riders, many who race the European 85cc championship. Again Team GB did themselves proud finishing fourth in their class. TM racing’s Callum Gasson also led several laps throughout the weekend and finished a very respectful seventh overall. Team Green Kawasaki UK’s Lewis Hall was also on fire, coming through the pack after some first lap incidents he nailed down eight overall with lap times in the top three. Both riders would’ve been even higher placed if not for a couple of small crashes. The third member of the team, current British small wheeled 85cc champion Kacey Hird (Team Green Kawasaki UK) gave his all too. Like Lewis, it was Kacey’s first big wheeled 85cc race and he didn’t disappoint. Riding a stock KX85 virtually straight out of the crate he battled hard as he always does to help bring the lads home in fourth.

The 65cc class certainly played their part in this brilliant event too. The talent and courage on show as they launched themselves off the top of some daunting step down jumps was something else. British Youth Nationals champion Charlie Heyman (Middleton KTM) proved he’s going to be in the mix at the sharp end of the European 65cc championship for 2016 by finishing fifth overall with some superb riding. Brad Lee Timmis also put himself about and certainly wasn’t intimated by his first time at such an event as he battled for every point to finish 19th overall. After a very late call up Harvey Cashmore also left nothing out on the track to help Team GB bring it home fifth in the 65cc category.

It was a brilliant effort by Team GB and one that acting Team Manager Jeff Perrett was obviously pleased with. “It’s been such a good weekend, a really good weekend. The event is so well run and with all it’s history and heritage I’m proud to say I’ve now been involved in it. It’s the first time any of us have been and if I have anything to do with it, we’ll be coming to this event every year from here on in. I really feel it’s event we have to be involved with and I know with the talent of riders we have at home we can come here and start really pushing for wins again like we used too. This year was just about getting back into the event, especially at such short notice, so hopefully next year we’ll be properly organised for it and it can be planned more in advance, whether I’m the team manager or not.’

“Our kids need to be racing these kind of events if we really want to produce more world class riders or champions, the level of competition is very high and it’s such a good experience for them. Our lads did awesome. I had no idea or expectation of where we’d finish, so to be close to making the top three is a fantastic achievement. They all had a blast and their parents have too and been so helpful in pulling this all together at very short notice. There was a real nice vibe in our camp and it made for a great weekend, so I’d like to thank them for that and also a special thanks to Romwy Garden Machinery and MBO Sport for sorting out the shirts and graphics and also GP Grafix for the awesome job they done printing them, it’s been greatly appreciated.”