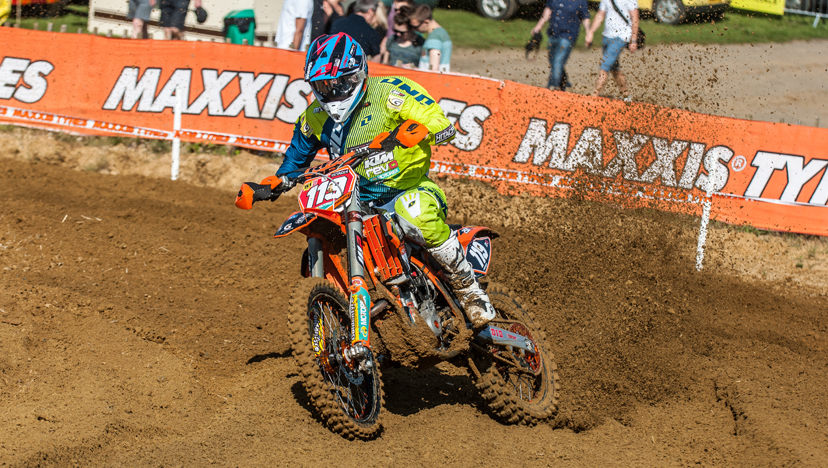 A quick chat with: Mel Pocock

It has been a season of contradiction so far for Mel Pocock. The Hitachi Construction Machinery KTM UK rider has been having a very good British championship season but somewhat of a lukewarm GP season.

However Pocock is playing it smart and safe in the UK. Even his bad races are very good and at Canada Heights he won the overall and his first moto of the season to increase his points lead at the top of the standings. Pocock is using his experience to control the championship after three rounds.

And with the British GP coming up this weekend, Mel is ready to show the world what he can do at GP level in MX2 and finally break into the top ten where he rightfully believes he belongs.

We caught up with the always friendly and chatty Pocock to discuss his win at Canada Heights and the upcoming British GP.

Mel Pocock: First moto was good! I battled my way to the front and once I got up front I rode pretty tense to be honest. I managed to settle down and bring it home for my first race win of the season which was good, it was  bit of a confidence boost and I realised I could do it.

In the second race I started second and passed Bryan and passed quickly into the lead. I rode well and then I stupidly looked behind and see Matiss coming and made a few mistakes, so I need to learn from that one.

The last race was a bit of a mare to be honest. I had an incident and hit my head on the handlebars and broke the throttle cables so when I closed the throttle the revs were still on – it was like being on cruise control. It scared me a few times so I backed it off a bit and brought it home in third  to get more points on the table.

It was a good day, it was a local race for me so I had sponsors here and people supporting me. I want to say get well soon also to my teammates James and James who have both got injured this week.

MX Vice:  The first moto you had a bit of contact off the start with Matiss, obviously you didn’t mean to put him down but did you mean to cut him off?

Mel Pocock: No I hadn’t planned to do anything like that, I’m not a nasty rider. I got off the start and if you look at the gates they are angled towards the bank and we just inched together, unfortunately he went down, I didn’t plan to do that at all it was a racing incident and that’s what happens.

MX Vice: So far this season you might not have been the fastest but you have used your experience and even on a bad race you have been top three.

Mel Pocock: I learnt that from before, to be a championship contender you have to be top three every race, top four at the worst, so I have been plugging away and keeping myself on the podium. But I am looking to up the pace and get those wins back on the board, I made some changes to my plan as of last week and hopefully it will pay off.

MX Vice: Is that fitness wise or bike wise?

Mel Pocock: It’s fitness and bike, we will put in even more hard work in the weeks and see what happens.

MX Vice: Just talk about the GPs so far?

Mel Pocock: The GPs have been a bit of a mission to be honest! I have had a few problems with the bike and crashed in a few races. But we are chipping on top ten which is my goal. The boys are fast, it’s intense and they don’t make many mistakes. That’s what makes it a world championship- it’s hard work! I am determined to better.

MX Vice: Do you feel the level has got higher this year in MX2?

Mel Pocock: Yeah of course, every year since I started it has got better and more intense. The pack is closer, the riders have got better, we are closer to Herlings and closer to the front. It is an ongoing process and everyone is getting quicker.

MX Vice: Are you looking forward to the British GP?