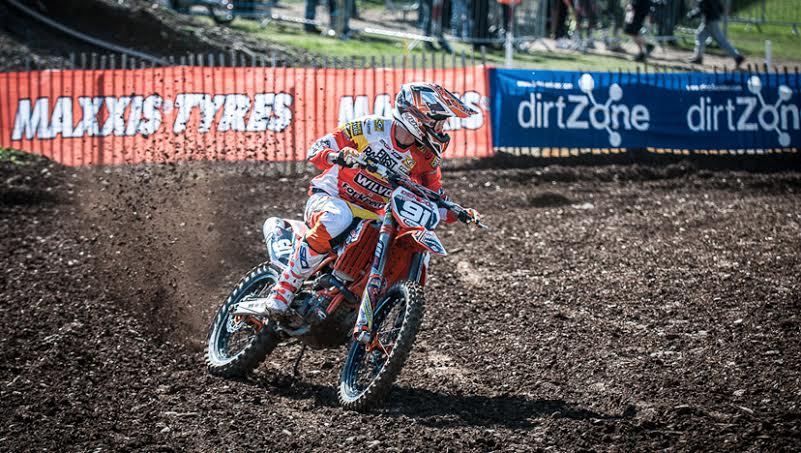 A quick chat with: Matiss Karro

Matiss Karro was without doubt the fastest rider in the MX2 class at Landrake. However a crash trying to pass Mackenzie for the lead with two laps to go in race three left Karro in seventh and handed rival Pocock with the red plate.

Karro was extremely down about his mistake when we caught up with him but realistically the Latvian can take a lot from his performances.  He impressed a lot of people at Landrake and his win in the second race was pretty special.

Everyone will now be using Karro as the yardstick for how fast they have to go to win in MX2. Despite his disappointment the affable Latvian happily still had his sense of humour as you will read in this interview!

MX Vice: You were flying all day, in the first two races you cleared off.

Matiss Karro: Yeah it was a good day. I liked the track, back on a 250 again but yeah the third race was unlucky just three big mistakes and messed the day up. So not happy at all.

MX Vice: Are you injured at all?

Just a couple of scratches but I will be fine. All the expectations were on me and maybe that has burnt me for the third race but I guess I have to be happy to be second. This is the best result so far in five years in England. Second in the first round of the British I am still in a good place and it is a long season.

MX Vice: You haven’t lost many points in the championship either.

Yeah I’m not sure how big the points difference is (they are tied) but it shouldn’t be too big. But yeah I can’t wait for the next round!

MX Vice: Your corner speed today was unbelievable; you lead the second race for thirty seconds, where did that speed come from?

I just cut the track somewhere – I’m not telling the secrets! (laughs).

MX Vice: You were fast straight away from practice; you didn’t seem to have many problems adjusting back to the MX2 machine!

Last year I finished the season without injury and I had good training during the winter and now I am back on a 350 which is perfect for me.

The 250 is similar but I struggled with the starts because I am bit heavier than everyone else! My first two starts were ok and the third start I was third but still got in the lead but I made a mistake and destroyed everything.

MX Vice: In the first two GPs you have looked good and shown top ten speed.

Yeah in GPs I felt good, I was surprised with myself. The bike is running really good, the Wilvo Fork Rent KTM team worked so hard on the bikes this winter and you can see the result.

I got the holeshot in Qatar and there are 12 factory bikes behind me – so we are better than factory almost! We had a little problem with the engine over there but we will come good again it is still a long season to show some good results.