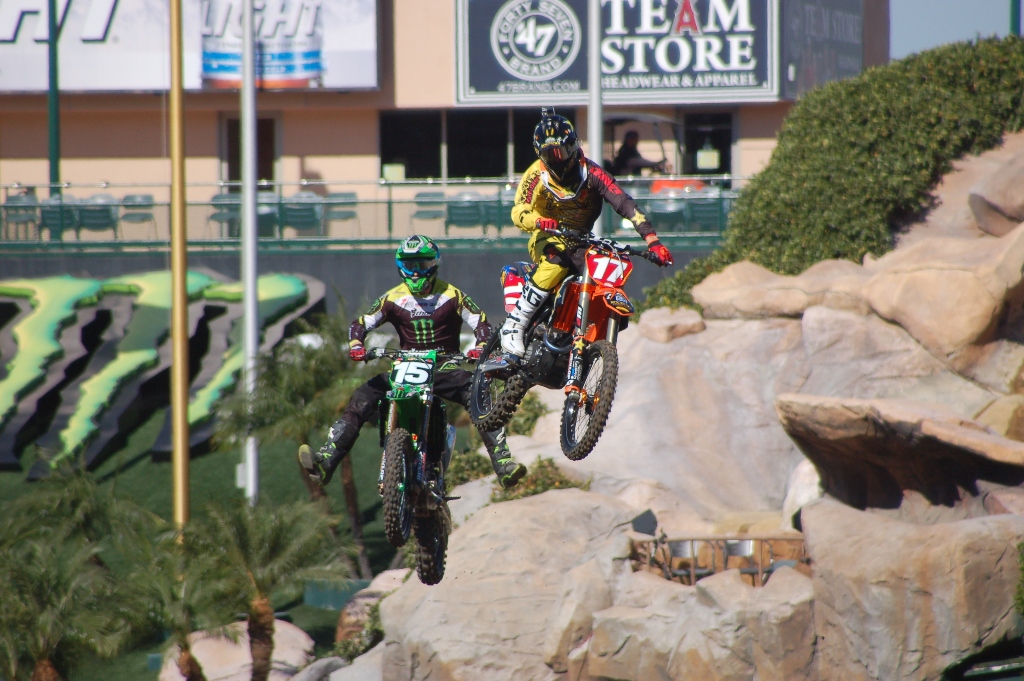 A quick chat with: Jason Anderson

Points leader Jason Anderson had a crazy race at Anaheim. After getting a start just outside the top five he ended up in a big battle with Malcom Stewart that saw them both hit the deck.

Anderson looked set to lose the points lead but fought back through to fifth, passing Stewart along the way to end up sharing the red plate going into San Diego.

The Rockstar KTM rider was still not happy with Stewart’s pass after the race but tried to put it behind him. You sense Anderson is storing up his frustration and hoping to take it out on the track at San Diego. It is there that  he hopes to get another win and retake sole possession of the championship lead.

MX Vice: You had an eventful race out there but talk about the contact with Malcolm…

Jason Anderson: Yeah, there is going to be contact in supercross. We came together and we both got the bad end of the stick so it wasn’t that cool but it happened.

MX Vice: You waited for him after the race, did you talk it out and are you ok about it now?

Jason Anderson: I am definitely not ok with it! Yeah we talked about it and whatever but it happened and it’s in the past.

Jason Anderson: Yeah for a while it wasn’t looking good but I ended up fifth and tied going into San Diego, so should be good.

MX Vice: Looking back four years ago when you turned pro did you see yourself eventually challenging for the championship?

Jason Anderson: Yeah that’s in the plans. If you want to make this as a career you have to make the steps and win a championship and winning races is a step. I definitely knew I would be here are some point it just took the work.

MX Vice: This year everything seems to have come together you seem to be the fastest rider on the track a lot of the time.

Jason Anderson: Yeah the bike is really good. I have to keep the progress going and keep working on it and hopefully be back up there.

MX Vice: Are you looking forward to outdoors on the KTM?

Jason Anderson: Yeah for sure I think the KTM is going to be a good outdoor bike so it should be good.