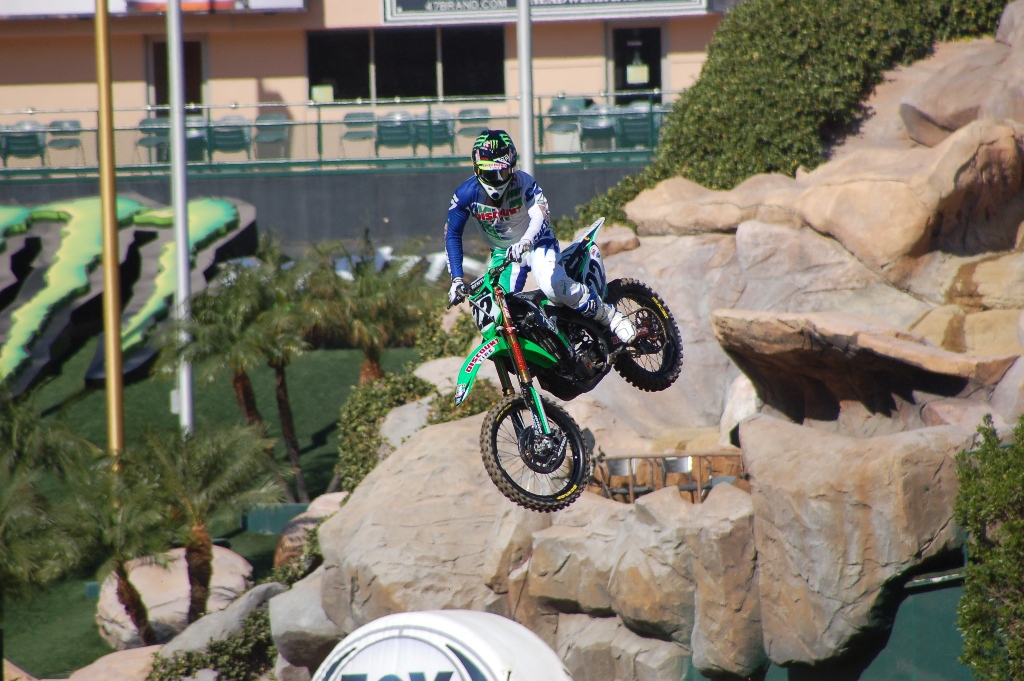 A quick chat with: Chad Reed

Australian Chad Reed continued yet another remarkable comeback story by winning his second supercross of the season.

Reed passed defending champion and point’s leader, Ryan Villopoto, on the first lap and held off a stubborn Ken Roczen to take a hugely impressive win.

Reed had been written off by virtually everyone coming into 2014 but the Aussie continued to believe in himself and his team .He worked hard in the off-season with the belief that he could still win.

And once more, Reed has proven everyone wrong. His win at A3 was maybe even more impressive than A2 because he passed and pulled away from Villopoto and held Roczen off lap after lap. Reed’s calmness under pressure was there for all to see as he barely made a mistake in the 20 laps hitting his lines consistently lap after lap.

A crowd of fans waited for a victorious Reed to come back to his pits and Chad happily chatted and posed for pictures with every single one of them. Reed has probably never been more popular in America and people seem to be really appreciating what he is achieving this year.

Afterwards Reed was kind enough to give us five minutes of his time to talk about his win.

Second win of the year – how do you keep doing this?!

I try to get good starts and lay down 20 solid laps (laughs). The track was really challenging tonight and I just felt good, felt comfortable. For me I honestly didn’t feel awesome all day long but each time out we would tweak on some little things so we learned a lot today. In the main event we made another little tweak and when you tweak in the main event it can be 50/50 almost, it can go both ways. But we were lucky that the decision worked out for us and I felt super comfortable in the main event.

A lot of times when Villopoto gets the holeshot he can run away but you were straight on him this time, made the pass and that was that!

I’m well aware that RV lays it down and he’s gone, so the plan was to try to stick on his wheel and go with him and let him do his thing and just see if the damage wasn’t too bad and try to have a go towards the end.

But as it worked out I passed him on the first lap and it was a lot of pressure. It has been a long time since I was out front and led twenty laps like that so that’s a good one to tick off the box. I am really proud of the changes we made all day to get me comfortable, some were a gamble but sometimes life’s about gambling and making a guesstimate. It was a solid night for us.

Ken Roczen was right on you at times then you would pull away then he was back on you at the end, he was the young kid racing the old experienced champion, it was a pretty cool battle, was it fun?

Yeah that was fun. The best thing about it was I knew he was going to pass me or put and aggressive pass on me if he could. But I knew he was just going to get in there and clean me out. So that allowed me to ride my lines and somewhat put a little faith in him that he wasn’t going to be dirty.

That was fun, he is neat guy and I love the fact he has come from Europe and was World champ at 17. You learn so much doing that, I’ve been there, that was the step I took, so I appreciate his skills and appreciate the respect he shows to other riders.

You were 18 when you went to Europe, did you think that at 31 you would still be winning supercross races and challenging the young kids for a championship?

Honestly it’s a long road for sure. You never know how long you are going to last in this sport, it’s been consistent that people in their thirties have not necessarily been very  successful but I still feel good, I still feel I have what it takes and I am just trying to still be a part of something that I love.

You have your trainer this year is that helping you?

I have had the same trainer the last four years – we just do our normal thing. It was a really long track tonight and those October/November grinds, the days I didn’t necessarily enjoy, definitely pay off on nights like this.

Look at the championship, catching and passing Villopoto, it has to give you confidence that you can be right there…

It’s good but I just take it with a grain of salt. We were the best guy tonight and we won but we move on to the next one. It’s going to be a long season with different conditions. I think we nailed the settings for the conditions tonight so we have to get good at that for next week and the future weeks because Ryan is a massive threat and he is obviously fast and strong, he is going to be there all the time.