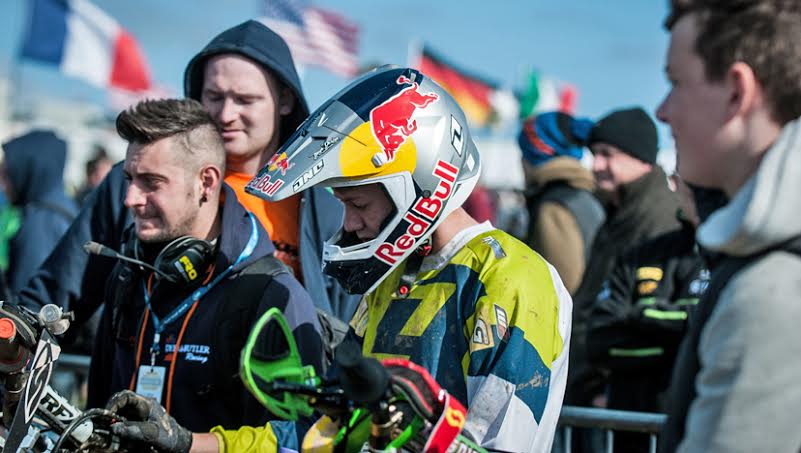 A quick chat with: Ben Watson

Ben Watson just showed everyone what he was capable of at Landrake!

The encouraging aspect of his performance, especially in race two, was that Watson is known more as a sand specialist but here, on the backed hard Landrake circuit, Ben Watson was giving his teammate Mel Pocock all the pressure he could handle.

Watson looked every inch the special talent people have been talking about for a few years. And once Ben realised how well he was riding you could see he wasn’t intimidated by anyone, he felt he was faster so he would just try to pass them.

The first and last race showed a different side to Ben as he had to come through the field but again the determination was there and it is those type of rides that can build character and show your team just how determined you are.

We spoke to a very calm and measured Watson at the end of the day and it almost seemed like his break out performance was no big deal to him!

MX Vice: Just take me through your races, the first one it looked like you had to come from the back!

Ben Watson:  In the first race I got a bad start and just had to pull through as good as I could. I managed to get into the top fifteen I think, something like that.  So that was alright but I knew I could do better.

In the second one I actually got a good start, I was in about fifth and I kept pushing and pushing then Lenoir made a mistake and that put me into third then I was right on second but it finished so I got third, so that was good.

In the last one I was in fifth and got taken out pretty bad down a hill but I just carried on and got top twenty, got a few people on the last lap as well which was good.

MX Vice: Using your second race as a barometer you have really stepped up from last season.

Ben Watson:  Yeah I have been riding quite hard in the winter and I tried to do more hard pack riding because I think I am better in sand. So doing that extra hard pack seems to have been good, I just got my best result today so I am happy.

MX Vice: You were catching Mel when you in third, what were you thinking, where you happy to be third or did you want second?

Ben Watson:  I was definitely happy to be third but I was right on him so I wanted to try and pass him but he was riding well so a third is good enough.

Ben Watson:  Yeah, I know I can get some good results but it’s just getting a start and piecing one race together is sometimes quite hard but if you just stay consistent the results will come.

MX Vice: What about the European series are you doing EMX2 again this year?

Ben Watson:  Yeah I am doing the Europeans again, but some of them are really far away and clash with some events but if I can do the full series I will but it just depends on how I am doing in the British and whether I am able to go them all.