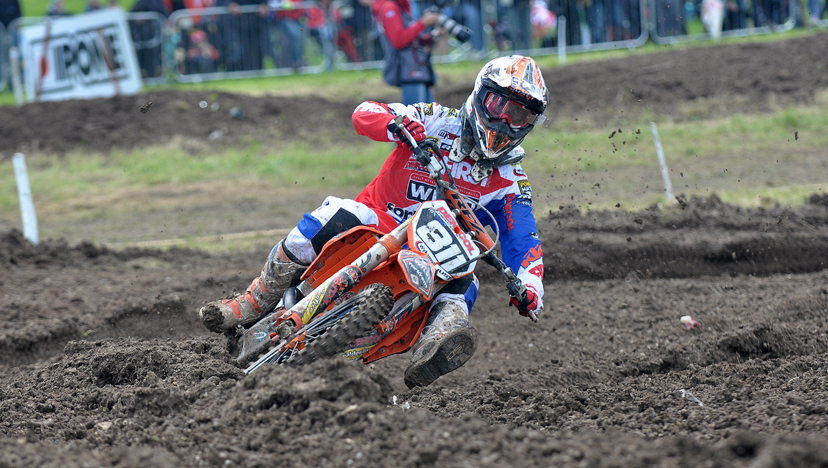 A quick chat with: Adam Sterry

Calm and focussed. That is how Adam Sterry strikes you as you talk to him. You get the sense that Sterry has very high goals to achieve and he will stop at nothing to achieve them.

At the British round of the EMX2 series at Matterley Basin last weekend, the Wilvo/Fork Rent KTM man showed his determination to overcome two crashes in race one and a terrible start in race two to still battle back for a podium.

In fact it was Adam’s desire to win and stay with a fleeing Ben Watson in race one that caused his first crash as he tried to pass Steven Clarke for second. But if there ever is a good crash, that was it. Adam showed he is not content with second or third – the kid wants to win and it is that attitude that will take him a long way in this sport.

Sterry is progressing fast and it probably helps to have Ben Watson coming through the ranks at a similar rate as they both keep pushing each other to be better. Both riders are the future for Britain and their budding rivalry could well lead them to GP success in the future.

We spoke to a pleased if still slightly frustrated Sterry after his brilliant podium at Matterley Basin.

MX Vice: That was a very hard fought podium!

Adam Sterry: Yeah it was a lot harder than I would have liked! My riding yesterday was good as well  and I could have been top three yesterday. Today I didn’t get such a good start but with the British fans behind me I managed to pull through the field and get on the podium and I was so happy with that.

MX Vice: The first moto you were all over Steven Clarke when you crashed , it looked like you were in a hurry to get past him because you could see Watson getting away, then you crashed again – how frustrating was that!?

Adam Sterry: Yeah very frustrating, the first crash I couldn’t do anything about it, I had to pass Clarkey because Nathan was getting away. There was nothing I could do I just slid out and then the second crash me and Jaulin were in the same rut and we just came together. Yesterday was a bit unlucky because I was riding as good as I was today. I had the speed all weekend but a few crashes and a bad start hurt me a bit.

MX Vice: When you got the bad start today did you think the podium was possible? You were buried in the pack!

Adam Sterry: It didn’t even really cross my mind, I was just trying to get to the front. I knew with yesterday getting a sixth I needed a good result to get on the podium here at Matterly so I am really happy.

MX Vice: Is it frustrating that  you are doing so well i the British championship where you won a race, you are beating Clarke there but he is leading EMX2 while you have had the odd crash and bad start. Is your next goal to win a moto and the overall in EMX2?

Adam Sterry: Yea that’s the goal every time I ride. It’s just been a few crashes and a bit of bad luck has put me on the back foot. We will just go race by race and see how it goes, hopefully I will get one of those wins and be on the top step of the podium soon!

Adam Sterry: At Canada Heights I lost a few points and dropped back a bit but I am still fifth. But hopefully I can get third in the championship – that is aim.

MX Vice: Next year do you know if you will stay in EMX2 or maybe go MX2 GPs?

Adam Sterry: That’s yet to be decided.