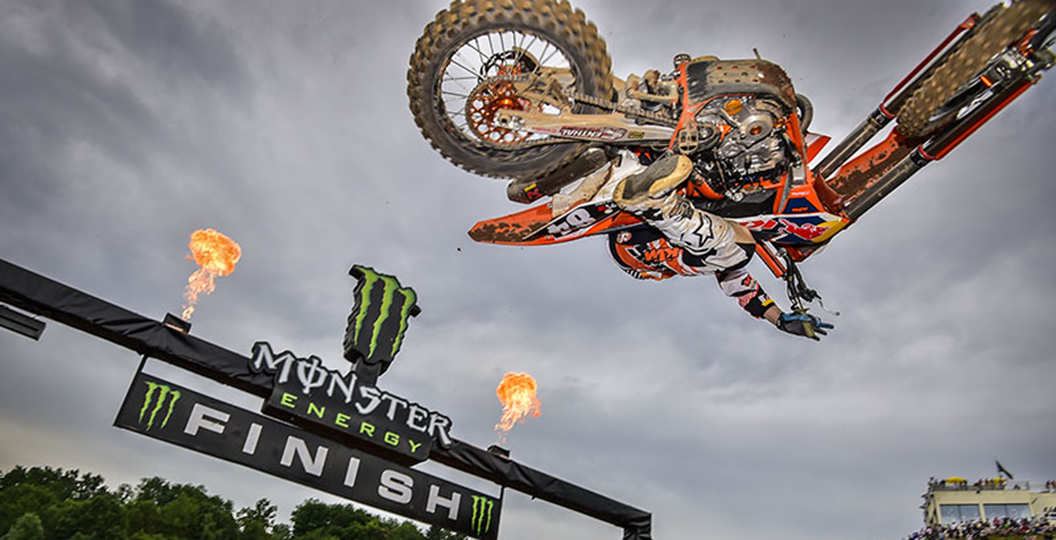 MAGGIORA (Italy), 14 June 2014 – The venue made most famous for the 1986 FIM Motocross of Nations was brought back to life for the second time this decade with Yamaha Factory Racing’s Jeremy Van Horebeek onboard his number 89 YZ450FM and Red Bull KTM Factory Racing’s Jeffrey Herlings onboard his number 84 KTM250SX-F toping the charts in today’s qualifying heat races.

While the paddock buzz screamed “pack your umbrellas it’s gonna be a mudder” the weather gods in Maggiora had other ideas bringing forth reasonably clear skies with cloud cover only creeping in mid-afternoon to supply the hard-pack surface of Maggiora with small amount of natural watering.

Thanks to the drizzle, the tracks’ condition was near perfect with no dust or mud in site. In the first races of round four of the European Championships EMX250 and EMX300, which also took place today, Bud Racing Kawasaki’s Sullivan Jaulin and Italian two stroke star TM Racing Team’s Samuele Bernardinidominated their respective classes for race one glory.

Thousands of screaming fans hugged the fence line all set to watch their hero Red Bull KTM Factory Racing’s Antonio Cairoli take on the qualifying heat challenge. When the gates dropped, it was Hitachi Construction Machinery UK KTM’s Shaun Simpson who led a long train of works riders for the first half of lap one. While Cairoli was initially in second, he was quickly pushed back to fourth as two of the fastest from timed training, Monster Energy Kawasaki Racing Team’s Steven Frossard and Yamaha Factory Racing’s Jeremy Van Horebeek, wasted no time in moving forward.

After finding a way around Simpson who eventually dropped back to ninth, Frossard took over the lead followed by Van Horebeek and Cairoli. With the trio riding close enough for any error to be costly, Frossard was the first to crack under the pressure having a sketchy moment down a hill and over shooting a 180 turn at the bottom. Van Horebeek was quick to take advantage of the error of the Frenchman who fortunately was able to quickly re-enter the circuit in second just ahead of Cairoli.

The fans were on their feet, horns were blowing and fists were pumping as their star Cairoli charged up the inside of Frossard in front of pit lane. Once in second, the Italian went to work on Van Horebeek who was showing experience beyond his years up front. Despite the huge effort laid out today, Cairoli pushed Van Horebeek to the finish but didn’t have it in him to take the win, giving the friendly Belgian Van Horebeek his first qualifying heat win of the season.

Frossard rode home for a solid third while Team HRC’s Evgeny Bobryshev should be applauded for his solid fourth only five seconds back from the winner Van Horebeek. Rounding out the top five a further two seconds back from ‘Bobby’ was Rockstar Energy Suzuki World’s Kevin Strijbos.

As for the other Italian stars DP19 Racing’s David Philippaerts and TM Ricci Racing’s Davide Guarneri, they came home in eleventh and twelfth respectively.

There is something in the air of Maggiora for Wilvo Nestaan Husqvarna Factory Racing’s Aleksandr Tonkov as he, just like last year, hauled off the line to claim the MX2 qualifying heat holeshot. While in 2013 Tonkov went on to claim his first ever qualifying heat win, today’s bid for pole was soon brought to a halt by KTM Silver Action’s Jose Butron who bravely jumped the double right out of the first turn to take over the lead.

After soaking up half a lap of fame, the duo Butrón and Tonkov’s time to shine was cut short as ‘The Bullet’ Red Bull KTM Factory Racing’s Jeffrey Herlings was quick to move through.

With Herlings going on to win in typical Herlings style, the battle for second was scorching. Butrón held second for the first few laps looking super hungry for a good result but appeared to have exerted too much energy maintaining the position and eventually dropped all the way back to ninth.

With Tonkov taking over second, the next weapon in Red Bull KTM Factory Racing’s arsenal, Jordi Tixier, was starting to close in. Inside outside, outside inside, jump long, jump short, Tixier was trying everything to push past Tonkov. After a good ten minutes of relentless pressure he finally made a pass that stuck.

With all four riding of the heels of each other, a mistake from Tonkov who was riding third, moved all four up one spot. Ferrandis eventually cracked the young Swiss Seewer, who a few laps later lost out to Febvre, too. Nevertheless, the Swiss star held off his fellow countryman Guillod to take home his best qualifying race result of the year.

Crossing the line, Herlings took the win twenty-two seconds ahead of Tixier, Ferrandis and Febvre with Seewer rounding out the top five ahead of Guillod and the holeshotter Tonkov. Marchetti Racing’s young Italian star Ivo Monticelli came home in a respectable eighth.