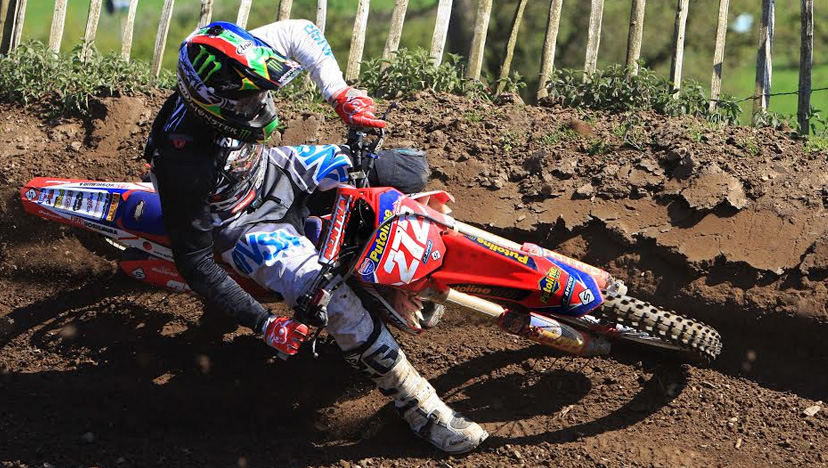 Neville Bradshaw and the Putoline Apico Honda team suffered a very rare and unusual mechanical breakdown in race two of last weekends round three of the new MX Nationals motocross series at Whitby in North Yorkshire. But dispite the disappointment of the DNF Neville was well on the pace in his other two races scoring two strong third places and was involved in some very fast close racing action with his main championship rival Bryan Mackenzie.

Bryan has now closed in on Neville’s championship lead but the team still retains the series leader’s red number plate going onto the next round.The weather and track conditions couldn’t have been more different over the two days of racing with the bright sunshine of Saturday giving the riders a hard dusty track, but then with overnight rain making Sundays racing conditions slippery in the morning but ideal in the afternoon, all be it a bit one lined.

Neville got the holeshot at the start of the first MX2 race, that has now been separated from the MX1 riders, but the on form Lewis Trickett passed him over the whoops on the first lap. On lap six Neville made a simple mistake and slid off his machine and dropped back to fourth, behind new leader Graeme Irwin, Trickett and Mackenzie. After settling back into his rhythm again Neville pushed forward in the laps remaining and finished the race in third place. The teams number two rider, James Harrison wasn’t pleased with his thirteenth place start but held a good pace throughout the race and finished thirteenth and scored some good championship points.

Neville started fourth in race two, but by half distance he had to slow with clutch problems and had to pull out of the race a lap latter. James had a better start and went round turn one for the first time in eighth place and ended the race in eleventh place amongst some of the countries best MX2 racers. In the third and final race of the weekend Neville gated just behind Mackenzie in fifth which started an epic battle between the two championship contenders that lasted the whole race. But, with a lap to go Neville dived up the inside of Mackenzie, just in front of the mechanic’s signalling area, snatching third place out of Mackenzie’s grasp.

James started the race in twelfth but crashed down to eighteenth place on the fourth lap. He then made a late charge and ended the race in fourteenth place, scoring valuable championship points in all of his three races.

After racing was over for the weekend Neville commented, “The pace was very close in qualifying with the top four all within a second and a half of one another, so I was happy with third fastest. In Saturday’s race I was pushing to get the lead from Lewis (Trickett) when I went down and dropped back to fourth place. In managed to get back into third place, so that wasn’t so bad. I my second race, the first on Sunday we had a bit of a problem with the clutch and didn’t finish that one, but in the last race of the weekend I gated fifth and battled with Bryan (Mackenzie) for the whole race but managed to snatch third place from him on the last race for another third place. We still hold the red leaders number plate, all be it by the narrowest of margins dispite the race two DNF, so we have to regroup and push forward for the rest of the year”

James said this about his day, “This is the coolest track we have ridden so far this year I have great fun racing it, but I have to improve on a few silly little mistakes I am making. I didn’t have a great start in race one, but managed to make some good passes and ended the race in thirteenth place. I have one of my better starts in race two but crashed and lost some places and ended the race in eleventh. In the last race I again got a reasonable start but crashed down the bottom of the race and ended the race fourteenth for twentieth overall but learning all the time”

The teams next championship outing will be at the Maxxis British Motocross Championship at Canada Heights in Kent on the 18th of this month.