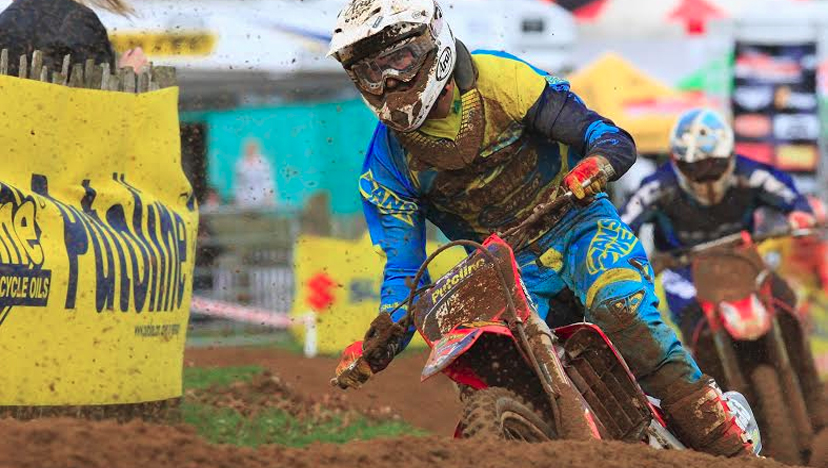 Neville Bradshaw and the rest of the Putoline Apico Honda team travelled to Lyng just outside Norwich in Norfolk last weekend for round two on the Maxxis British Motocross Championship and once again ended a day of hard racing on the winner podium in third place overall.

Lyng is a fast sandy power sapping track steeped in history laid out around a steep hill deep in the hart of the countryside and is a test for both man and machine.

Overnight rain had left the track in excellent racing condition and Neville showed good pace by qualified fifth fastest while the teams number two rider James Harrison, who is still gaining valuable experience in the adult MX2 class qualified twenty third, ahead of a number of more established riders.

Neville was fourth into turn one at the start of his first race behind the on form Adam Sterry, and two GP riders Mel Pocock and Mattis Karro.

Karro crashed a couple of times pushing Neville up a place and after holding off a late charge from Bryan Mackenzie he finished the race in a fine third place. Once again Neville got a good start in race two and followed Sterry, Pocock and Karro into turn one and matched there pace.By the time the race had reached the halfway stage Sterry was fading, and three laps from the end of the race Neville passed him to finish the race in another third place behind Karro and Pocock.

Pocock got the holeshot in the third and final race of the day with Neville in his wheel tracks, but by the third lap Karro found a way past him, and two laps later took the lead from Pocock. With four laps to go and under extreme pressure from Neville, Pocock made a mistake and slipped off his machine letting Neville through to second place, giving him third place overall, which moves him into a strong third place in the championship after just two rounds.

After a happy Neville said, “It’s been an awesome weekend. The team have been putting in a lot of time testing and training and the bike is really great. With three consistent rides we were only two points off the win and now we are third in the championship so Hopefully we can keep the ball rolling from here”

James had three strong rides and scored points in two on his way to twenty-fourth on the day.

He said after, “It’s been a good day today, and although I scored the same amount of points that I scored in the first round I thought I rode better today and tried my hardest. I ended up enjoying the races, more so when it was at it’s roughest as I work hard on my fitness and that’s when it pays off. We managed to score some good points in races one and three but was out of the points in the second race, after a bad start. It’s all good experience for the future”