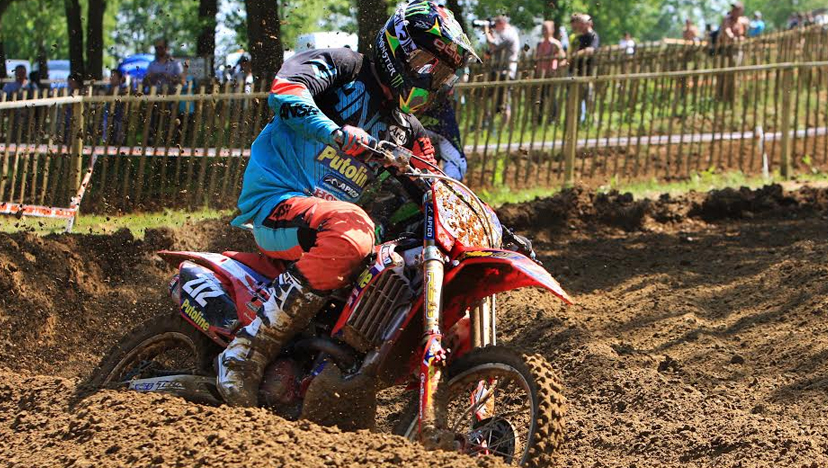 The Putoline Apico Honda team went to a sunny and hot Canada Heights circuit in Kent last weekend for round four of the Maxxis British motocross championship where both of the teams riders had a good points scoring day, but ended with a bit of disappointment for it’s number one rider, for Neville Bradshaw in the last race of the day he was passed by another rider that robbed him of the all important podium visit.

Neville, who had been suffering from a heavy cold for over a week before the event had a good qualifying and ended the superpole session fourth, but well on the pace of the leaders.

In race one Neville gated well and spent most of the race chasing after the eventual winner Mel Pocock, but just before the two lap board come out the cold took it’s effect and Neville was past by the ever improving Ben Watson pushing him back to third place.

Neville made race two hard work for himself as he was mid pack as the riders went round turn one, but Neville being Neville he just kept up a good pace and ended the twenty minute plus two lap race in fourth place.

The last race was very close, apart from GP rider Matiss Karro who got the holeshot and just disappeared, and of the next four riders could have taken the runner up spot.

Neville spent most of the race in fourth, but snapping at the heals of Bryan Mackenzie and Mel Pocock just waiting for the time to pounce, but with a lap to go Steven Clarke dived up the inside of Neville taking his fourth place away from him and robbing him of third place on the overall podium.

After Neville said, “It’s been a decent day as qualifying went well as I ended up fourth in superpole so had a good gate pick for the races. In my first race I got a good start and was second to Mel (Pocock) for most of the race till Ben (Watson) pushed me down to third towards the end. I the second race I didn’t get a good start and was back in about eleventh place, I new my pace and my riding was good so I pushed forward ending the race in fourth place, but right behind the others. In the last race I was in fourth and it was like a train with all the riders going flat out and as fast as they could, but Steven (Clarke) managed to pass me on the last lap which I wasn’t happy about as it cost me that all important podium position. But all it all I have scored some good championship points and I am in a strong third place in the championship standings, but I am still disappointed about losing that podium on the last lap of the last race”

The teams number two rider, James Harrison came away with some good championship points and loads more experience of top flight motocross. James had a couple of crashes in race one but still managed to come home in twentieth, out of forty riders. After a not so good start in race two James managed to finish in sixteenth place, but saved his best race of the day for last where he finished eleventh.

After racing was over for the day James said, “It’s been a really good day today as I qualified sixteenth which is the highest for the year so far which will help me out with my starts. In race one I gated well and went into turn one in about twelfth place but I crashed on the first lap. I was making my way forward again but fell again and ended the race in twentieth. In the second race the start wasn’t so good but I managed to push forward and ended the race in sixteenth which matches my highest result. In the last race I got a great start and went round the first turn in about sixth and ended the race in a good eleventh place. So I am very happy with my day”

The team’s next outing will be at the MX Nationals at the end of the month.