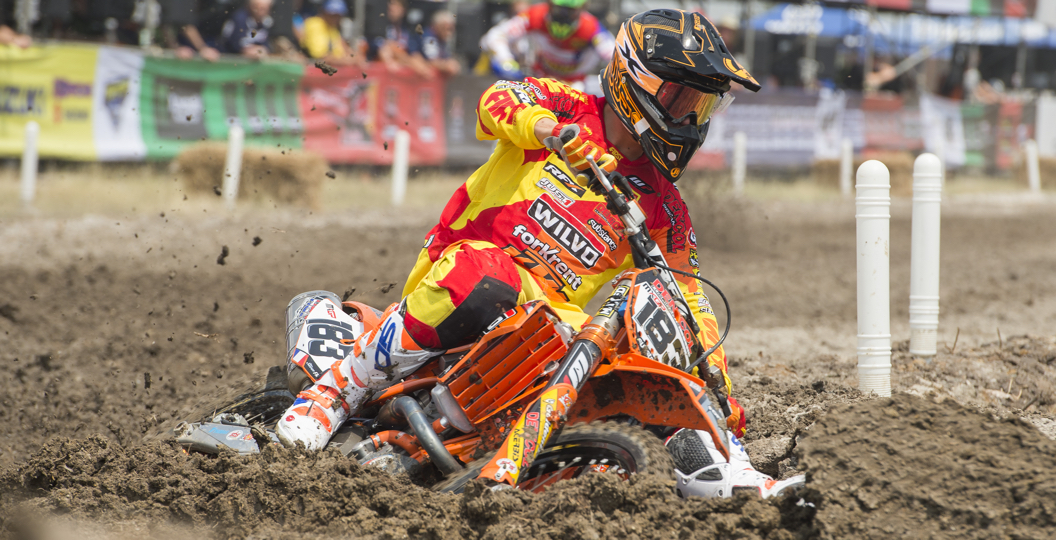 The Maxxis British Championship powered by Skye Energy (yep, the name is long) will fire into life this weekend at the new (to the series) venue of Hilton Park. Although a handful of MX1 contenders are injured, the class is still wide-open thanks to some foreign imports. Who will be battling at the front this year? Well, here is a look at a handful of the elite guys…

Shaun Simpson: In my opinion, Shaun Simpson is heading into the Maxxis British Championship as the undoubted favourite for the MX1 title. He’ll face stiff competition in the form of Steven Frossard, and the two should be quite close in speed, although I believe that Shaun’s experience will see him prevail. However, he banged up his foot at round one of the MXGP series two weeks ago and, consequently, may not be one hundred percent. Despite this, I still believe he’ll exit the opener with a firm grasp on the red plate; he’s the reigning champ for a reason.

It is also worth considering that a majority of the rounds this year are sand and Shaun is a sand specialist, of course. Put simply, it is looking good for the Scotsman! But there are also a handful of riders that will be nipping at his heels…

Steven Frossard: With his teammate, Jake Nicholls, on the sidelines, Frossard is undoubtedly the rider that is most likely to rip the number one plate from Shaun at the end of the year. Prior to the start of the MXGP season, I would have put Steven equal with the reigning champ. However, the Wilvo Forkrent KTM rider has had a less than stellar start to the season, so I expect him to get stronger as the year progresses. On his day, there is no one that can match him. I’m sure there will be at least one round this year where he is just ‘on’ and dominates, but then there may also be days where he has a DNF or is wildly inconsistent. His title chances will depend on how frequent those days are.

Kristian Whatley: When it was first revealed that Kristian had signed with the Buildbase Honda squad, most raised their eyebrows. The last time that he was on a Honda was simply disastrous, but after seeing how he has performed at the pre-season races (his team has had a packed schedule over in Italy) I feel confident when I say that he’ll be a consistent podium contender. I’m not one hundred percent sure whether he’ll be a title contender at the end of the year, but I see him as the next best guy behind the two riders already mentioned.

Tanel Leok: Of all these riders, Leok is the unknown quantity I believe. If he wins round one, I wouldn’t be too shocked (he too is a sand specialist). However, on the other hand, if he finished sixth I also wouldn’t lose my mind. His performance in the MXGP series last year wasn’t good, but then he impressed at the Motocross of Nations, so I guess it just depends on which Leok shows up. Don’t count him out though!

Graeme Irwin: I usually wouldn’t put Irwin down as a title contender, but this year I’m willing to consider it. He’ll be very fast, as usual, and probably surprise a few (for some reason his raw speed goes under the radar somewhat). However, whether he’ll be able to stay consistent enough to fight for the title remains to be seen. I foresee him winning a handful of motos, perhaps one overall, and finishing around fourth in the championship. That’s kind of what we have come to expect of the Irishman.

Brad Anderson: I originally would have said that Brad Anderson would drop down a spot or two this year, but (let me finish) he was relatively good at Hawkstone. So, because of that, I think he’ll probably have a similar year to what he had in 2014. Will he win an overall? I think it’ll be tough, but expect him to be battling around fourth a majority of the time.

Gert Krestinov: I wasn’t sure whether to put Gert Krestinov in this category, but he is a part of the ‘top tier’ of guys. Although I was initially tempted to say he would be towards the back of this group, he is a great sand rider and could surprise a few. He’s not going to contend for a title, but he has the potential to be a podium threat consistently. We’ll know more about where to put him after round one, but I’ll be watching closely.

Injured Contenders: Obviously both Elliott Banks-Browne and Jake Nicholls would be battling at the front of the pack, but unfortunately they are on the sidelines with injury and will miss the first couple of rounds at least. I would have both riders right in the thick of that lead group with Simpson and Frossard, and they will be there when they return.