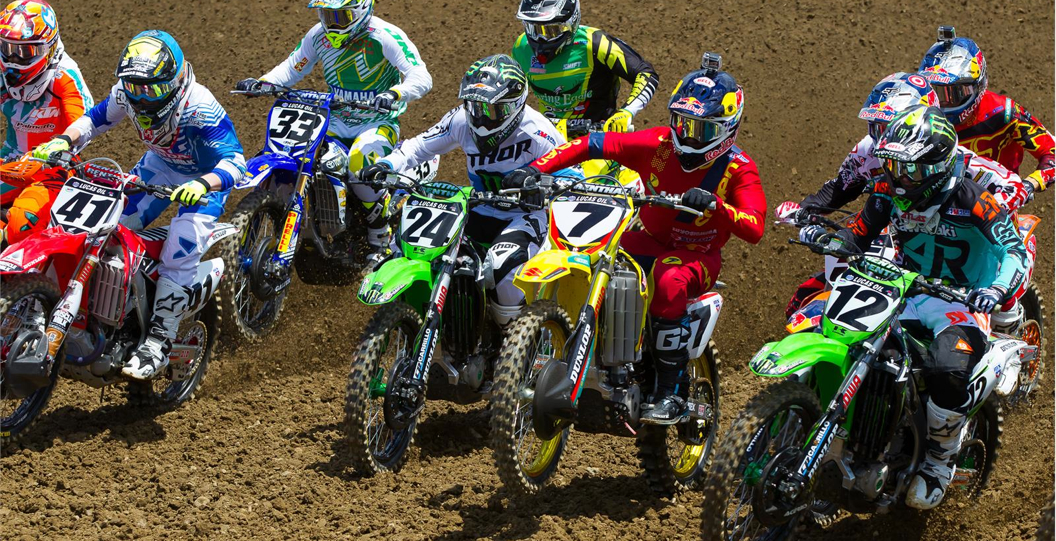 Difficult weekend ahead for James Stewart:

I feel for James, I really do. I do not believe that he was taking Amphetamine in order to gain an edge. However, all eyes will be on him this weekend, and truthfully, he will probably have to deal with some unpleasant fans that will call him a cheater. I am quite interested to see what James turns up. Will he be outgoing, and willing to defend himself to the media and people within the industry? Or will he hide away in his bubble, like he did a couple of years ago? Whatever happens off of the track, James still has a title fight to focus on, and he will have to do everything in his power to block out the negative vibes.

Although the two premier classes may seem stacked already, there are actually a handful of riders that have not been present in recent weeks. Three of the big hitters that were missing will be back on a bike this weekend, and looking to make a statement. Eli Tomac and Justin Brayton sustained injuries towards the end of the supercross season, so they have very little motocross testing beneath their belts. However, both guys are accomplished riders, and could have some strong finishes. Eli especially belongs up front, whilst Justin is on the cusp of joining the leading group.

In the 250MX class, Dean Wilson will return from the nasty gash that he sustained at Glen Helen. After getting over the fact that his title hopes were over before they really started, Dean set his eyes on revenge. Although he has openly stated that he isn’t ready to run up front, he will be looking to lay a solid foundation for the remainder of the year. With Wilson back on a bike, he will undoubtedly be one-hundred percent for the Motocross des Nations, too!

Will Chad Reed have moved forward?

Unfortunately, Chad Reed has been trying to limit the damage thus far this year, as he was nowhere near where he needed to be at the beginning of the Lucas Oil Pro Motocross season. However, at the round before the break [High Point] he showed glimpses of his former self, which indicates that he will be right with the top five this week, especially now that he has another two weeks of training beneath his belt. Chad is out of the title hunt, so he too will be playing a spoiler for the rest of the season. This could get interesting, folks!

Who will take control of the 250MX class?

Following the first two rounds, everyone was ready to hand Jeremy Martin the number one plate. However, Blake Baggett has proven to be a worthy challenger, as he has won the two most recent rounds, and holds all of the momentum currently. Jeremy still has a comfortable cushion in the standings, but Blake is coming, and he must know that. It will be very interesting to see who can take control of the series as we enter the midway stage, as it could have an intriguing effect on the results.

The Maxxis British Championship will resume this weekend at the popular circuit of Whitby, following a break of more than a month. Of course, a lot can change in that time, so we expect one of the two title contenders in either class to establish themselves as the man to beat. But, Tommy Searle and Max Anstie will be present as wildcards, which will surely impact the standings in both classes. I’m sure that the two riders in the runner-up spots are hoping that they will aid them.

Interestingly, a couple of title contenders are a little banged up from recent incidents. Jake Nicholls (second in MX1) really needs things to go his way on Sunday, but whilst his rival (Shaun Simpson) has stepped it up, he has been struggling with a hand injury. Nicholls’ teammate, Matiss Karro, is in a similar position in MX2, so whether they will be as good as we have seen them remains to be seen.

Finally, following two months on the sidelines, Elliott Banks-Browne will return to action this weekend aboard his Buildbase Honda. Admittedly, he has not had the best results since moving into the premier class, but he looked like he was about to breakthrough before he succumbed to injury. EBB has stated many times that he is keen to show everyone what he can do in the second half of the season, and with no pressure on his shoulders, we think he will thrive. Evidently, there are a variety of different stories to keep an eye on at Whitby this weekend – the action promises to be riveting!