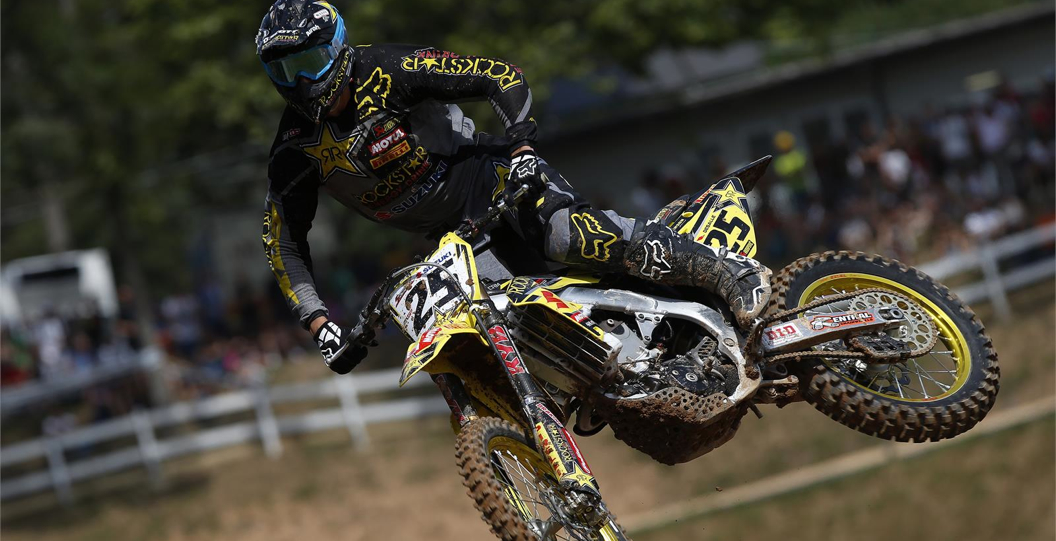 Following an exhilarating Italian GP one week ago, all eyes will be on the eleventh FIM Motocross World Championship round this weekend, which will take place at the popular venue of Teutschenthal in Germany. But, what are some of the more specific stories that you need to watch out for? Well, allow us to inform you.

Is the dream over for Clement Desalle?

If you are a regular reader (and if you are not, you should be), then you are already aware that I believed Clement Desalle was capable of making a run at Antonio Cairoli for the MXGP title. Now that has not changed, of course, but he has a much larger deficit to overcome following Maggiora. Will he chip into the thirty-eight point gap that Cairoli has over him? I don’t think that is an unrealistic expectation, but he will need a bit of luck on his side to pass the Sicilian. I will be very interested to see if Desalle is a little deflated this weekend, because the fire to win the title is not burning as brightly.

The riders that are waiting to breakthrough:

Although we are already past the halfway the point, there are some riders that are still looking for a breakout ride. Most notably, Petar Petrov and Mel Pocock have the potential to achieve much better results than they have done thus far this year. Both guys ran up front in the first moto at Maggiora, but garnered lacklustre results due to crashes and various other issues. It seems that luck does come into it, and once they have one good finish under their belt it will snowball, I am sure. Will this begin this weekend? It certainly is a possibility.

Surprisingly, Max Nagl will return to action this weekend after breaking his scaphoid towards the end of April. In the past, a scaphoid injury has proven to be troublesome, so it remains to be seen if he will be on top form. Remember, he returned from an illness at Teutschenthal last year (at the Motocross des Nations), and had one of his best rides of the year. So, he could mix it up in the top five straight away, if he can get out of the gate. Nathan Watson will also return to the series this weekend, as he has picked up a wildcard ride with the Red Bull IceOne Husqvarna squad. He has only completed one round this year, so there aren’t any expectations on his shoulders. However, do not be surprised if he starts to battle for spots inside of the top ten.

Will frustration be a factor for Jeremy van Horebeek?

We are still waiting for Jeremy van Horebeek to clinch his maiden MXGP win, and it will happen – it seems inevitable. However, after nine consecutive trips to the podium, I wonder when the Belgian will start to get frustrated. He was again painfully close at Maggiora, but he just needs to find a little more. However, whilst looking for that, he may ride over the edge and end up on the floor. Again, do not be surprised if Jeremy is on the top step this weekend, but if he isn’t, keep an eye on his reaction.

Can Mike Alessi establish his dominance?

At the first two rounds of the Rockstar Energy CMRC (Canadian) Motocross series, Colton Facciotti proved that he has the speed and ability to challenge Mike Alessi, which has never been called into question. However, at the third round last weekend, Mike proved just how strong he is, as he took commanding victories, and the overall victory. Although he is still seven points down in the championship (following his penalty at the second round), you would think that he will take control of the series very soon. If he wins in a similar fashion this weekend, it will be devastating for the competition.