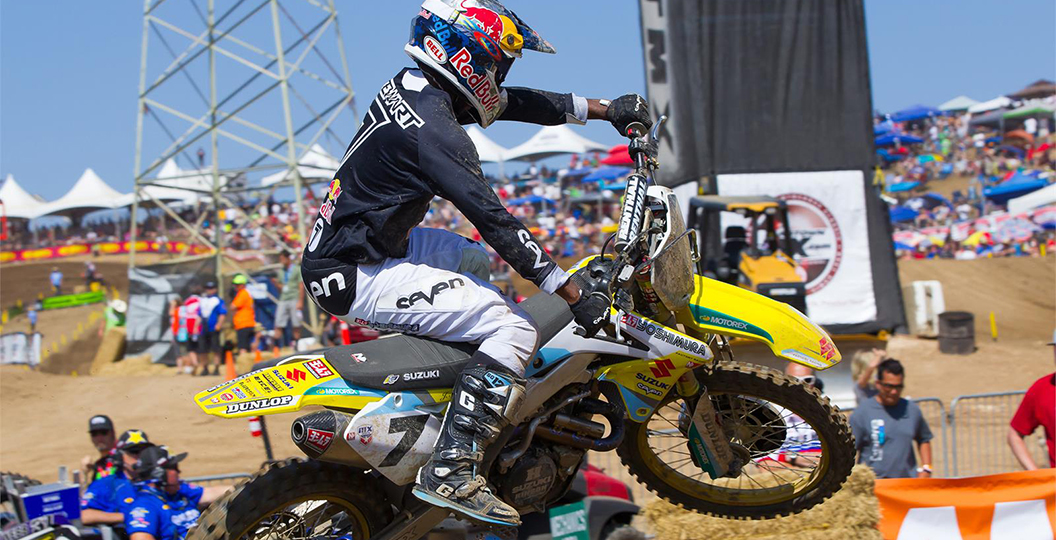 With the FIM Motocross World Championship on a hiatus, there is a little less action going on this weekend. But, there is still a lot for you to keep an eye on! Most notably, round three of the Lucas Oil Pro Motocross series will be taking place in Colorado, at the spectacular Thunder Valley track. There is also the Pro Nationals Festival, and the ‘Friends of Huck’ race, in the UK, so there is plenty to keep you entertained.

Who will be the one to step up?

The Red Bull KTM duo of Ken Roczen and Ryan Dungey have dominated the 450MX class so far. But, they will be beaten at some point, as James Stewart, Trey Canard and Justin Barcia are too good to not win a race. Heck, they may even steal a victory on Saturday. Trey Canard is undoubtedly the next in line, as he currently has a brace of thirds to his name. If he can start with the leaders, he should be able to challenge them. James Stewart will be in that position soon, I’m sure, but he is not at that point yet — he is making strides each week though.

Jeremy Martin and Cooper Webb have been in a similar position in the 250MX class; they have finished first and second in each race thus far. Honestly, there aren’t too many riders that have shown they can beat them yet. Jason Anderson has a lot of speed, but his results have not reflected that. Blake Baggett is obviously very fast, too, but he is quite inconsistent, which has been detrimental to his championship campaign.

The riders in need of a rebound:

Justin Bogle is another rider that has the potential to split up the Yamaha party at the front of the field, but, it is unknown how he will rebound from his hard fall in the second moto at Hangtown. Obviously, he was unable to finish that race, but he seemed to be relatively healthy, although he is undoubtedly banged up. Blake Baggett also failed to finish the second moto at Hangtown, as his Monster Energy Pro Circuit Kawasaki had a rare mechanical problem. Blake is currently eighth in the standings, fifty-two points down, so he really needs to start making up some ground immediately.

Andrew Short often struggles at the first couple of Lucas Oil Pro Motocross rounds, and this year is no different, as he has not yet finished in the top ten overall at either round. Obviously more is expected of him, and he has the speed, it is just bad luck that has hindered him. Thunder Valley is his home race, so those positive vibes should help him to rebound this weekend.

Who will cope best with the conditions?

Thunder Valley is quite unique, as the altitude often causes the bikes to have less power. Obviously, some riders are able to cope with this better than others. For instance, Ryan Dungey has won in Colorado multiple times, but Chad Reed struggles there more often than not. The altitude is even more troublesome for the 250F guys, especially for the bigger guys. But the 250MX field could be in for another rough weekend, as the two Star Racing riders are small in stature, and their bikes are already some of the most powerful.

Who is going to fare best in the deep sand?

Honestly, I am surprised that there are so many pro riders that have signed up for the Pro Nationals Festival. It seems like an uneccesary risk, but the riders are clearly willing. But who will be happy to lay it all on the line in the deep sand? That is going to be most interesting. Nathan Watson should be a favourite, as he is always strong in the sand, but there are a lot of riders that will be looking to become the first winner of the Pro Nationals Festival.

Whatley and Irwin do the double:

Seeing as the Pro Nationals Festival is a novelty race, Kristian Whatley and Graeme Irwin have decided to have some fun! Both riders will be competing in the pro class, and the 125 two-stroke class, which will be very taxing on their bodies. The riders will surely struggle to maintain the same pace all weekend, especially in the demanding deep sand. It is going to be quite interesting to see who copes with the challenge best.

Can anyone topple Mike Alessi?

The second round of the Rockstar Energy Motocross Nationals will take place up in Canada this weekend. Interestingly, Mike Alessi has a formidable opponent in the form of Colton Facciotti. You may be familiar with that name, as Colton did contest a handful of Lucas Oil Pro Motocross rounds with the Troy Lee Designs Lucas Oil Honda team in 2011, and with some success. The common consensus is that he should be racing in the USA full-time, but he is most comfortable being a big fish in a small pond. Anyway, he is currently tied in points with Alessi, so it’ll be most interesting to see if he can hang onto the American.