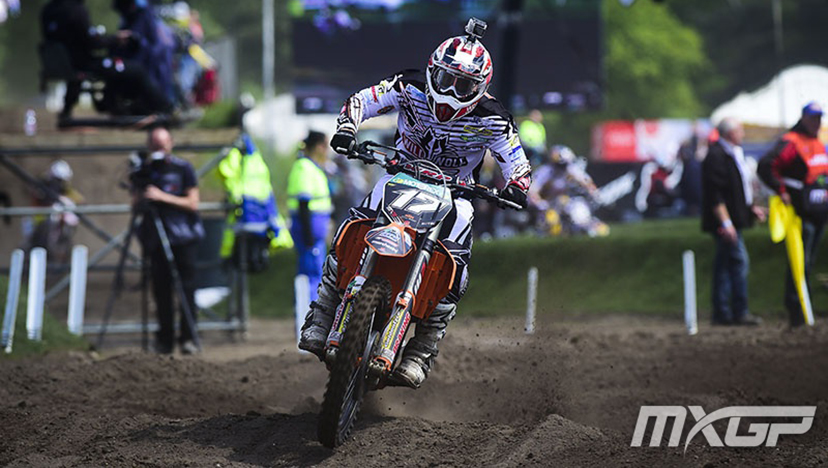 Swooping in on sunny Spain

Also joining MXGP at the track of Talavera de la Reina, which is located approximately 130 kilometers southwest of Spain’s capital Madrid, the European Championships EMX250 and EMX300 will line up for their second rounds of the season. It will be a particularly special day for the EMX250’s round one winner Bud Racing Kawasaki’s Spaniard Jorge Zaragoza as he lines up to prove to his nation he is their future in MX2 and MXGP racing.

With each round of MXGP, FIM Motocross World title number eight inches closer and closer for the reigning champ Red Bull KTM Factory Racing’s Antonio Cairoli. Although he is not quite as dominant as his MX2 teammate Jeffrey Herlings, he is definitely the easy bet in MXGP with only Yamaha Factory Racing’s Jeremy Van Horebeek showing the same kind of consistency.

Yamaha Factory Racing’s Jeremy Van Horebeek is easily the most improved rider in MXGP this year. After six from six top five finishes, five of which were podium finishes, the young Belgian has now engraved his name at the top of the list as Cairoli’s biggest title threat.

After getting off to somewhat of a slow start to the year, Rockstar Energy Suzuki World’s Kevin Strijbos looks to be picking up steam. The FIM Motocross World Championship veteran has finished the last three rounds of MXGP with two podiums and one top five placing, confirming he’s a man on a mission.

For the last four years Rockstar Energy Suzuki World’s Clement Desalle has walked away ranked two times second and two times third in the world. Although he has been touted in the pre-season as the likeliest threat to Cairoli, it seems he has not quite found his mojo for season 2014 as more often than not he is seen lingering in the shadows of the front runners. Despite his momentary lack of wow factor, the 2013 vice world champion remains as one of only three MXGP victors this year.

Meanwhile J-Race Racing’s Joel Roelents pulled a rabbit out of the hat last weekend in Valkenswaard to come away with his first top five in the premier MXGP class. This weekend the young Honda rider will be on a mission to prove last weekend was no fluke and he has in fact got the goods to be an easy top ten placer.

Although nothing is official yet, it is unlikely Monster Energy Kawasaki Racing Team’s Gautier Paulinwill line up this weekend after sustaining a broken collarbone and thumb after his hard crash in Valkenswaard.

Red Bull KTM Factory Racing’s Jeffrey Herlings has ridden half of this season without the red plate and seems to posses a much more humble attitude this year. Despite the new modest approach, the Dutch teen-ager hung his insane sand riding skills out for the whole world to see last weekend in Valkenswaard when he set the fastest lap time of the weekend, an astonishing 3 seconds faster than the fastest rider in MXGP, Antonio Cairoli. This weekend the MX2 class will look a little more ‘normal’ with the red plate to have returned to Herlings’ number 84 KTM machine.

Wilvo Nestaan Husqvarna Factory Racing’s Romain Febvre had very much a bittersweet experience in Valkenswaard when he was passed in both races on the home stretch. Nonetheless, the Frenchman is confident he is moving 100% in the right direction and expects big things for the remainder of the season.

It has been a scruffy start to the year for Red Bull KTM Factory Racing’s Jordi Tixier but it seems he’s finally starting to turn things around. The young Frenchman has now nailed two consecutive podiums and is clearly determined to keep this momentum going this weekend in Spain.

If Standing Construct KTM’s Valentin Guillod’s moments of brilliance are anything to go by, it’s only a matter of time before the Swiss sensation lands his first ever MX2 podium.

While CLS Kawasaki Monster Energy’s stylish Swiss Arnaud Tonus didn’t really expect to beat Jeffrey Herlings in the sand last weekend, on a difference surface he has proved he can definitely run the pace and is more than capable of winning. It wouldn’t be too crazy to predict Tonus to be hot on the heels of Herlings this weekend, keeping his chance of a MX2 championship title alive.

As MXGP hits the homeland of 2013’s MX2 bronze medalist and the classes hottest starter KTM Silver Actions Jose Butrón, it definitely raises the curiosity factor as to how the Spaniard is going to perform.