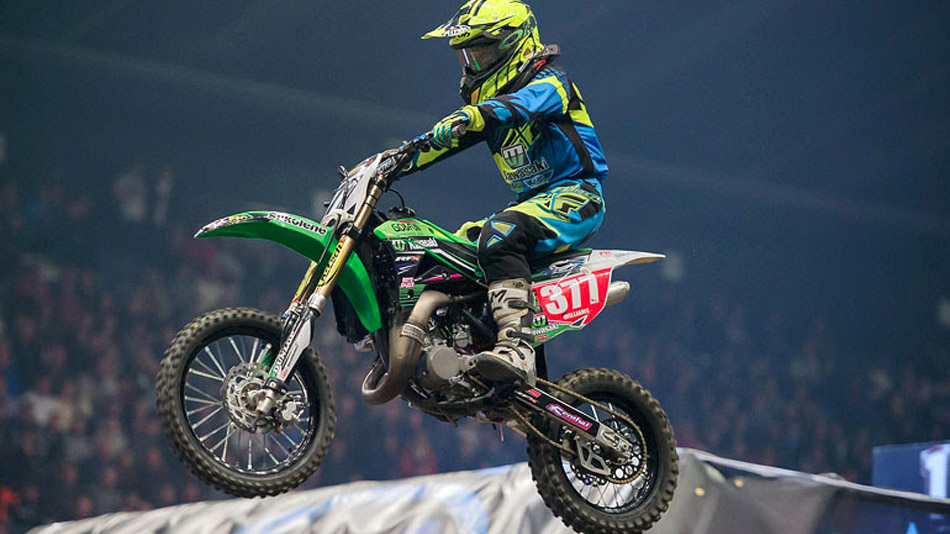 It’s been a busy few months for the MJW Go&Fun Kawasaki team with youngster Preston Williams who has been competing in the UK Arenacross Series. The 10-year-old competed in all seven rounds of the Garmin Arenacross series and finished the highest placed Kawasaki rider in third position in the Championship standings. Preston who was riding the new Kawasaki KX-85 in the Small Wheel Championship rode extremely well, improving at each round.

His highest placed finish was at the final round at Wembley Stadium where he finished second in the race and secured him third place in the standings. The MJW Go&Fun Kawasaki team are now all working hard for the start of the season and all the riders are preparing well for the year ahead.

Preston Williams – “I was really excited going into the last round of the series as I knew I could fight for the win and wanted to end on a high. Practice went well, I was fastest. Then in Q1 I managed to go quickest and in Q2 we tried something different but that didn’t work and I ended up in 2nd.  I knew with a good start I could fight for the win, I managed to get the holeshot and was in the lead, I got the final jump wrong which put me wide into the next corner and Kurt (Griffiths) came underneath me. He managed to gap me slightly, I was pushing really hard to try and catch him but knew third placed man was close and I couldn’t make any mistakes, I finished second and was pretty pleased with that.

As for the Championship I’ve never even thought about it as I just wanted to take each round as it came and do well in each of them. When they announced me as finishing third overall I was pretty surprised as I didn’t realise I had a possibility of being in the top three. It’s been a really good Arenacross for me and now I’m really looking forward to the outdoor series. I must thank all the team sponsors and Mark at MJW Kawasaki for giving me the chance to ride on his team.”

Mark Woodage – Team Owner/Manager – “A huge congratulations must go to Preston for taking 2nd on the evening and 3rd overall in the Arenacross series. Massive progress has been made in the last few weeks and Preston has got stronger at every round. For a 10-year-old I think we have a little superstar on our hands. Special thanks must go to Kawasaki Motors UK, Go&Fun Energy Drink and all our other loyal sponsors. Also a big thank you must go to Jim and Karen Williams for putting in all the effort to help Preston achieve his goals.