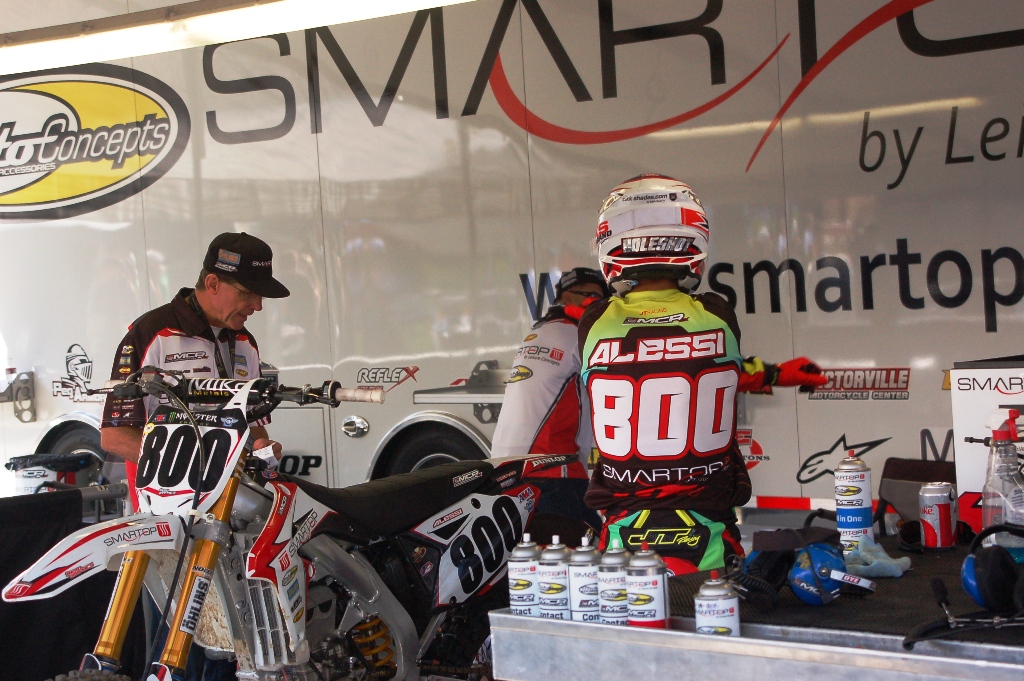 The teams were starting to gather on Thursday at Qualcomm stadium in San Diego with a few riders arriving early for press day.The track crew continued their preparation of the track as the teams began to set up their pit presence.

Geico Honda’s Eli Tomac was the first rider who we chatted too and he admitted that he was very frustrated at getting injured at the first round. He explained that seeing Ken Roczen winning added to his frustration but that he was also happy Ken was winning because he was the guy he battled with all last season.

Tomac took 3-4 weeks off after the nations before going right back to supercross testing on the 450. He says the bike can’t be man handled like a 250 but feels racing in the 450 class is less sketchy than the 250s.

At the moment Eli says he is at 90% with his injury and the more he rides the better he feels. He expects to be 100% in a week or two and wants to win some races! Tomac could be one to watch this weekend, he is fired up.

We also caught up with a returning Josh Hill and Mike Alessi and both are feeling confident for Saturday night.

Feeling back to his best in pre-season Josh Hill came into the season with high hopes on the RCH Suzuki, but an up and down first few weeks ended with a broken collarbone in Oakland.

Unbelievably Hill is back this weekend in San Diego in what will be just two weeks after his injury. Decked out in military style shift gear this weekend, Hill will look the part.

Hill is on the RCH team for the full season indoors and out and it will be the first time Hill has raced such a long schedule in years.

MX Vice: You had a bit of an up and down season as soon as you got into the top ten you got hurt again. Are you definitely able to ride on Saturday?

MX Vice:  Are you in much pain with it?

Josh Hill: It’s not too bad it hasn’t really bothered me that much.

MX Vice:  You had a bit of a tough start to the season after looking good pre-season ?

Josh Hill: I pinched a nerve in my back the Monday before Anaheim and I couldn’t practice for the first few weeks. Then after A2 I got a normal week on the bike and felt great going to Oakland and just a little mishap and busted my collarbone, it was a really weird deal.

MX Vice:  You made a quick recovery did you have it pinned and therapy?

Josh Hill: Yeah I had surgery because it was broken in three pieces and got in plated. Doctor Alexander did everything he could to get me  back on the back as soon as he could with the way he did the surgery. So yeah eight days later we are here.

MX Vice:  You are wearing some pretty cool gear for the weekend

Josh Hill: Yeah it is military appreciation so our team went out and our bikes camo and Shift have camo gear, plus a buddy gave me a sweet military hair cut (shaved) so we are ready for it.

MX Vice:  What are you looking for this weekend top ten?

Josh Hill: Yeah that is definitely what I am looking for every time out. I think I am over that threshold of being hurt. I expect a lot more out of myself and keep pushing towards the front of the pack. I really feel I can be running with the front guys.

MX Vice:  Do you feel mentally you are back to where you where in 2010 when you were winning races?

Josh Hill: This off-season was the best I have ever felt. But I still have problems with my ankle but I worked around it and I feel pretty damn good.

MX Vice: Working with Ricky Carmichael has that been much different than working with other teams?

Josh Hill: Well Ricky Carmichael hired the right people to get this team rolling. So Ricky hasn’t really been around much this year but he has got the best people for the job to be around us 24/7 and that has made all the difference in the world.

Usually known for his outdoor skills, Mike Alessi is starting to turn some heads in the supercross this season.

Alessi was pretty impressive at A3. He took the fight to James Stewart and showed that he was starting to believe he could run up front, unfortunately for Mike, the results didn’t quite reflect his speed and aggression.

We caught up with Mike to get his take on his newfound speed in supercross.

MX Vice: On paper it didn’t look like you had a good night at Anaheim last week but you riding was really good what were your thoughts on it?

Mike Alessi: My team has been working really hard and my team is pretty dang good. So I am excited for the season to start getting better. Some of the races have been good and last weekend I was starting to break out of my shell and start riding aggressive to try to move forward, just the back break locked up so it was unfortunate.

MX Vice: In the heat race you went for Stewart early but didn’t quite get him.

Mike Alessi: I had a good run through the whoops but the last whoop gave me a weird kick and my hand slipped off coming into the turn and it was hard to stop. It was just a rookie move on my part I guess.

MX Vice: In the semi it looked like you were going to win it but made a couple of mistakes in the last couple of laps and ended up third. You looked a bit frustrated I saw you shaking your head.

Mike Alessi: I got a holeshot and was pulling away and then I made a mistake then almost fell. IN the very next turn I lost the back end then the next turn I over jumped, so I made three mistakes in row and then Barcia was right there and he got me.

MX Vice: In the main you were looking really good again, putting pressure on Stewart and racing with the very top supercross riders.  You have to take a lot of positives to be racing with those guys. Where has this new found speed and confidence come from?

Mike Alessi: I have just been working with Michael Byrne and it has been helping a lot. I have more confidence in my bike, I am trying a lot harder and trying to race the guys. But I also want to be smart, they are going fast and it is a deep field this year and very competitive, you have to make it to the end of 17 supercross races.  There are still a lot of races to go and I look forward to the rest of the season.

MX Vice: Each week your confidence must be getting higher and higher the more you can see you can run with those guys.

Mike Alessi: Yeah I agree, my confidence is getting bigger and it’s getting better. I feel like as the season has gone on I am getting faster. I got pretty sick after Phoenix and at A2 and Oakland I was pretty dang sick. I could barely ride and had a 102 degree fever and sick in bed all week. So I am just starting to feel now 100% healthy and ready to go race.