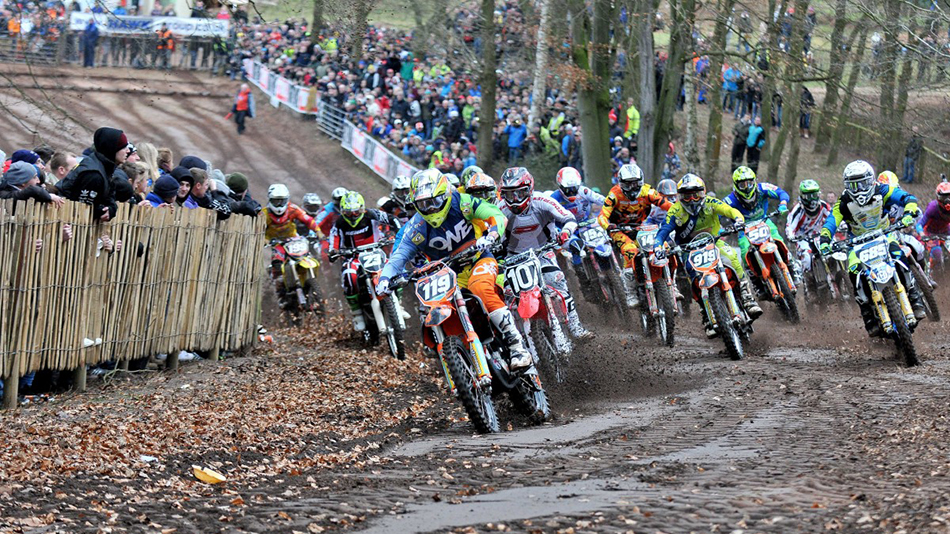 The 2014 Maxxis British Championship will finally fire into life on Sunday, at the very popular Landrake track in Cornwall. Intriguingly, some new riders have joined the series for this year, which will surely shake up the results, and make for entertaining racing. With round one less than two days away, now seemed like the perfect time to offer up our predictions.

The premier MX1 class is certainly more stacked this year than it was in 2013, as a handful of riders have joined the class. However, Shaun Simpson is going in as the undoubted favourite, despite the influx of title contenders. Shaun is on top-form at the moment, evidently; he has had some brilliant rides recently. The fact that he is battling with the best riders in the world each week will only help him progress on and off of the bike, which will make it very hard for anyone to beat him, in my opinion.

Of course, Jake Nicholls will be in a similar position as Shaun, as he too will be competing in the MXGP series throughout the year. However, he is battling some injuries at the moment, which is going to hinder him at the first couple of rounds, I believe. However, once Jake gets back to full fitness, he should be challenging Simpson for race wins; he may have already lost too many points in the title chase by that point though.

I believe that the battle for third in the series will come down to either Kristian Whatley, or Elliott Banks-Browne; I foresee these guys being very competitive throughout the year. I do think that they will both win a lot of motos, and a round or two, also. In fact, I would not be surprised if are in a position to win the title going into the series finale. I am sure that some fans will overlook them, because they aren’t doing the MXGP series. However, that may be an advantage for them, as they will not have to contend with a tough travel schedule.

There were a handful of riders that I almost put down as my ‘wildcard’ for the MX1 class. But in the end, I went with Luke Hawkins, because he really is heading into the season under the radar. 2013 was not great for him, but his performance at the final round really opened my eyes – he showed that he has the speed to battle inside of the top five. I do not know if he will be able to do that consistently this year, but he should be a top ten guy each week.

Overall, there are a lot of riders that will want to make an impression on the leaders at some point this year. Krestinov, Anderson, Irwin, Law, Snow, Carless, Elderfield, Ratsep, Martens, Coutts, Gregory and Nathan Watson will all be mixing it up at the front; it is going to be a brilliant season!

In my opinion, Mel Pocock is the favourite for the MX2 title this year. However, I know that some people would disagree with this, as Matiss Karro is the favourite, in the eyes of most. But, I still believe that Pocock will be stronger though, simply because he is riding the 250f all year long, whereas the Latvian will have to change bikes each week.

I do believe that this will hinder Matiss, but the fact that he is riding the 350f in the MXGP series will make the transition a little easier than if he was riding the 450f. Of course, the Latvian is also quite injury-prone, which may hurt him in the title chase. It will be very interesting to see how the Wilvo Forkrent KTM rider handles the change of class.

The battle for third will surely be intense, as Steven Lenoir, Neville Bradshaw, Bryan Mackenzie, Steven Clarke and Martin Barr (to name a few) will all be up front and vying for this position. In my opinion, Lenoir will get the spot, as I believe he had the most potential out of those riders mentioned. Honestly, I expect the Frenchman to be winning some races, and to become a regular fixture on the podium. Although his ride at the Hawkstone International was lacklustre, I am sure that he will have turned it around by Sunday.

In my opinion, Ben Watson has the potential to break into that group this year, as his ride at the Hawkstone International was extremely impressive; he beat most of those guys! I think that Ben will continue to progress this year, and be on the cusp of the top five more than often! So, remember to keep an eye on him this year, he could make a huge jump up.

This was a tough one! Really any of the top three can win the title as could 2013 MX2 champion Elliott Banks-Browne. Going off the little racing there has been so far Simpson is definitely the man on form and with his confidence he could well get off to a flyer and win round one. He will be racing with Cairoli all year and if he keeps getting the starts with the best in the world it will only make him faster.

But I expect Kristian Whatley to be right there all season and getting his share of moto wins too. Simpson though is a former British champion too and has a team used to winning titles every year and, along with doing GPs that might just give him the edge.

Jake Nicholls is a harsh third. But due to his back injury it is hard to say just how long it will be before Nicholls is back to his best. Again I expect Nicholls to get his fair share of moto wins once he is fit and if truth be told it could come down to the last round with any of these three capable of winning.

Then there is EBB, I expect Banks-Browne to be knocking on the door of these guys all year long but his lack of experience on a 450 and the fact he isn’t doing GPs to bring his speed along might mean he could just a mistake or two more than the top three.

Graeme Irwin should also be in the mix but a shoulder injury that really hurt his Hawkstone results is making Irwin a bit of a question mark. If he has recovered and is fully fit, the determined Ulsterman will be banging bars and going for podiums and wins. If not he might struggle to be top five.

Let’s not forget Brad Anderson! Ando had a bad season last year and will be anxious to show everyone he still has what it take to do the job. You can never rule out the British bulldog!

My wildcard is going to be Scott Elderfield. I really believe in this guy’s talent and, if he has his head on straight, can be in the top five or even get a podium.

Yes Matiss Karro isn’t in the top three – although I think he could well be the fastest rider out there! My only concern with the flying Latvian is that he is prone to a big crash or two and with switching between bikes and the amount of GPs, he might just pick up an injury again that might keep him out of a round that will hurt his championship chances. Hopefully that won’t happen and he can really go for this title! And with the speed he showed at the GPs he is my pick to win Landrake.

After speaking with Martin Barr, he convinced me that this is going to be his year. On natural talent alone Martin has the stuff to win it however it takes more than talent to be British champion. But it sounds like he is in a good place this year and has all his ducks in a row plus an impressive new training regime. This just might be his time, it’s a bit of a risk but I really believe Barr can win this title if he rides to his potential every week.

Mel Pocock is probably the favourite to win but he is still adjusting to the KTM and I can’t decide if travelling all over the world will leave him worn out by the time he comes to racing a British championship round. It could work the other way of course and lift his speed and confidence so that he will be a level ahead of everyone stuck in the UK!

Steven Lenoir is always lurking in the background waiting to pick up the pieces. Lenoir was extremely impressive last year and I expect him to challenge for the title on the Husky. If Lenoir can stay consistent on the sand while excelling on his more favoured hardpack he will be right there.

Bryan MacKenzie is coming to the first round beat up but if he can limit the damage he should win races again this year. Again, much like Irwin in MX1, his fitness is more of a question than his speed right now. Speedwise Bryan is in the form of his life and can certainly challenge for the title.

Neville Bradshaw is always going to be there too and you can never rule him out, much like Mackenzie he seems to get faster with age, but the young guys are coming!

Adam Sterry is leading the wave and he should be pretty special this year. I would expect Adam to be on the podium at times this season and if he gets off to a good start to the year and is consistent you never know what he could achieve. Sterry is capable of finishing top five overall this season.

Ben Watson is my wildcard. The younger of Watson brothers has stepped it up in the winter and it looks like he might just show everyone why he was such a hyped schoolboy rider. This could be Ben Watson’s break out year in the adults.