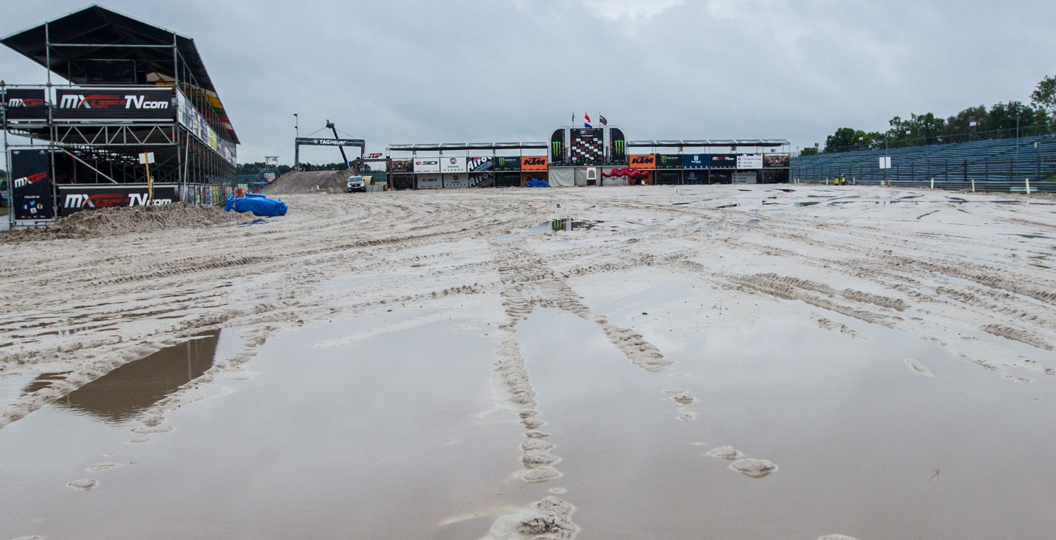 It really is hard to remember a season as wet as this. The year that Jeffrey Herlings and Tommy Searle duked it out for the title springs to mind, as the Grand Prix contingent simply could not escape the rain, and the 2017 FIM Motocross World Championship has unfortunately been similar to that. It does not seem as though that is going to change this weekend either.

The MXGP of The Netherlands, which will be held at the man-made circuit of Assen, has been battered with rain recently. How bad is it? The sand is soaked, there are waterlogged spots to the side of the circuit and preparation for a mudder is in full swing. Track crews often perform miracles overnight, just as you would expect, but it seems that the weather may prevent that this weekend. Rain is expected all day on Saturday, hence why it is hard to imagine a scenario in which this would improve.

Similar weather hit Assen on Sunday morning last year and the circuit held up well. Admittedly some ruts were extremely deep, but aside from that there were no major issues. There were concerns that the track layout would just fall apart, seeing as it is built up on concrete, but that was not an issue. The circuit was treacherous though, hence why a dramatic affair could be in store if there is constant rainfall.

That is bad news for those in a high-pressure situation. Antonio Cairoli and Pauls Jonass are on the verge of clinching their respective titles, but there may be some major swings in the points. Cairoli will still be rather safe, even if he fails to finish either moto at Assen, as he is sat on a lead of ninety-six points. If that did happen and Herlings acquires a second in each moto, Cairoli would still win the title on Sunday afternoon. Crazy, right? A sixteenth in the first race would be enough for him to claim the crown at midday.

Pauls Jonass leads the MX2 chase by forty points, so would need to gain ten points on Jeremy Seewer to lock that thing up a round early. Jonass is a better sand rider, there is no doubt about that, but Seewer has proven that he is stronger in sloppy conditions. Who will the circuit favour this weekend? That remains to be seen, but the latter will undoubtedly be hoping for as much rain as possible. The Suzuki World MX2 rider wants to take the title fight to the final round at the very least.

What news has emerged in the days prior to this event? Nick Kouwenberg will act as a replacement for Valentin Guillod on an Assomotor Honda and complete his second event in MXGP this term. Kouwenberg last entered the division as a wildcard at Uddevalla and acquired a single point. That was aboard a Yamaha, however, and he was backed by the ASTES4-TESAR team, so it remains to be seen if he’ll adapt to the CRF450RW in a seamless fashion. The Dutchman obviously has great memories of piloting a Honda around this circuit though, as he locked up the EMX250 title in the sand two years ago.

Tommy Searle has some additional logos on his jersey this weekend, as he has struck up a deal with the Gebben Van Venrooy Kawasaki team for their home event. ‘100’ will still be beneath the Monster Energy DRT Kawasaki awning this weekend, of course, but he’ll just have the Gebben Van Venrooy and Venko logos on his jersey. David Herbreteau has separated from the F&H Kawasaki Racing Team, in more Kawasaki-related news, and will not be competing at the final two rounds.