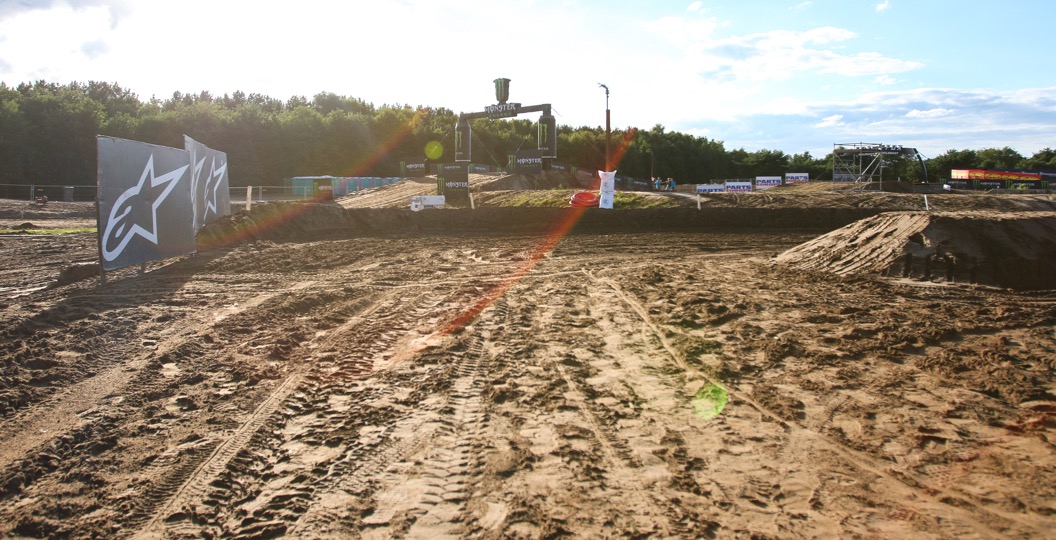 The bottomless sand of Lommel is a traditional stop on the FIM Motocross World Championship calendar and, for the most part, the circuit has not changed at all since 2012. The surface will again strike fear into the hearts of most this weekend, but the Grand Prix contingent will also be forced to tackle a new layout.

Minor modifications are made to a circuit all of the time, but the changes that have been made to this sand pit are anything but that. The track runs in the opposite direction, features new sections and the start has moved! It is, unfortunately, simply impossible to run through the endless changes that have been made to the circuit in the last twelve months in this feature, so keep an eye on MX Vice to view the first GoPro lap with Max Anstie tomorrow.

An interesting point to watch is the first turn, which is far more complex than in years past. The old layout featured a large sweeper that was rather safe and, whilst this right-hand corner is still wide, it quickly funnels into a left-hand turn that should cause those in the middle of the pack to bunch up. The first half of the circuit that follows that is rather fast, but it quickly tightens up. Those switchback turns will undoubtedly become extremely rough and one of the most treacherous parts of the circuit.

Overall, the changes appear to be popular. A handful of guys simply commented that it looked nice and were excited to see that a change had been made. The fans should also be ecstatic about the alterations that have been implemented, as one of the main focusses was allowing them to get a better look at the start and experience the rush that comes with that.

Those at the Belgian Grand Prix are actually in for quite a treat, as Antonio Cairoli and Jeffrey Herlings will square off in the bottomless sand for the first time since the Motocross of Nations in 2012. The duo raced together at Valkenswaard earlier this year, one may argue, but the circumstances were far from ideal. Cairoli dealt with vision issues and small mistakes, whilst Herlings had to overcome bad starts and a lack of momentum. Both riders are on top form now, but one question still remains. Will Cairoli engage in a gruelling tussle? The fact that the championship is now his goal has been mentioned many times.

The fact that the circuit is completely different will only add to the intrigue, although Jeffrey Herlings really did not have much time on the old layout. Herlings, a dominant force in the sand, has gone 3-1-1-1-DNS-DNS-DNS-DNS-DNS-DNS at the event since his professional debut in 2010. Just completing every round up until this point in the season is a minor victory for the Dutchman, as he has not managed that since 2012.

All eyes will undoubtedly be on those two, but Gautier Paulin and Max Anstie are not too shabby on this surface either. There are a few guys, like Clement Desalle, who have undoubtedly lowered their expectations ahead of this weekend though. It is an exciting time to be a fan and that actually says a lot about the state of MXGP. The title fights in each class are far from exhilarating at this point, but there are a cluster of stories to follow in each division.