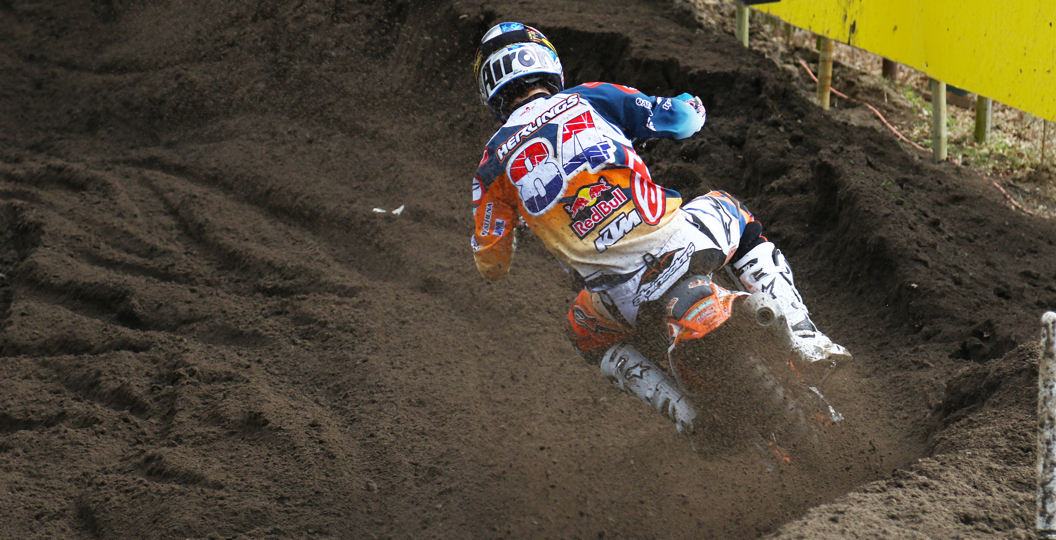 Having this much action is a bit of a shock to the system, as the premier class have only just wrapped up their second and final practice session. There was a lengthy three-hour break between sessions for the riders, but they won’t be treated to that much free time again.

What noteworthy points emerged? I guess we should tell you that Jeffrey Herlings is on another level, but that surely won’t come as a shock. In free practice he was just under two seconds faster than the rest, but that clearly just wasn’t good enough. The Dutchman, chasing a fiftieth GP win this weekend, then went out and set a time more than two seconds faster in time practice, which is undoubtedly a result of conditions rapidly deteriorating.

Brent van Doninck looks to be his closest challenger, although his times from the second session don’t exactly reflect that. There have been a lot of positive comments bouncing around the pits, regarding his form midweek, so I look for him to finish on the box this weekend. Calvin Vlaanderen has made some noise in the class too, in his return from injury, sitting comfortably inside of the top six each time. Perhaps he could surprise and hand HSF Logistics their first podium finish?

MXGP was much more surprising and, honestly, I’m not sure you can draw much from the times. Antonio Cairoli and Romain Febvre didn’t really feature at the front at all, but you would think that they will figure it out when it is time to race. Cairoli is recognised as probably the best sand rider in the class, based on past performances, and Febvre made a splash here last season. They will have the twelfth and ninth gate picks in the qualifier.

Remember the days when we would get to a sandy track and the only riders near the front would be Dutch and Belgian? It seems we are getting back to that somewhat, as Belgian riders topped each MXGP session. Jeremy van Horebeek was fastest in the ‘free’ session and Kevin Strijbos occupied the same spot second time out. That will be a massive confidence boost for Strijbos, who was arguably one of the most disappointing riders through rounds one and two. Perhaps this will be the site of his first overall win since 2007?

You wouldn’t necessarily expect Tim Gajser and Tommy Searle to be up front here, but both riders broke free of the stereotypes in practice; they were second and third fastest. Searle is seemingly riding a wave of confidence following his performances in recent weeks, so it’ll be interesting to see how that translates to the qualifying heat later today. After struggling with starts at the flyaway events, Searle seemed to have figured them out at Lyng last week. That could be the thing that either makes or breaks him this weekend.

Then again, you could argue that the start will not be as crucial here; the sand obviously creates plenty of opportunities to pass. Speaking of the track, it has actually turned out to be in pretty good condition. Overnight rain made it a little more difficult this morning, but we have managed to dodge further rain aside from a quick shower during MXGP.

Some rapid fire points to end, as the MX2 riders are currently prepping their gates. A handful of riders are dealing with illnesses, some are more serious than others, and reports suggest one of those is Ben Townley. That would explain his lacklustre times in qualifying, so it makes sense. Tanel Leok appears to be on for a strong top ten finish this weekend, despite the fact that he is again on what looks like a stock KTM and in plain gear. The Estonian was on for a fill-in deal with 24MX Lucas Oil Honda, but that fell through last minute.

Filip Bengtsson looks very fast, which shouldn’t be much of a surprise, so I have him pegged to do quite well. If you are playing fantasy motocross, I would bear that in mind. Elliott Banks-Browne has been the most impressive wildcard, as he was fourteenth in time practice. Clement Desalle was one spot further back; he seems to be much improved this weekend.

Right, the qualifying heats aren’t far away. We better run! Remember, you can follow all the action with our live Twitter updates. If you’d rather have them all in one place, this link is the one for you.