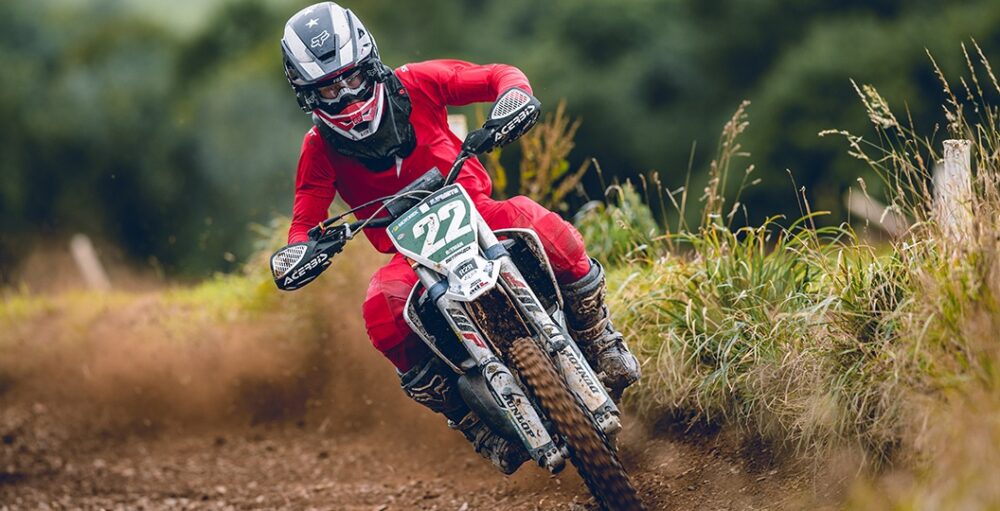 The SJP Husqvarna riders and their merry band of youth riders tackled the second round of the 2020 Michelin MX Nationals over the weekend, and experienced some success along the way. Official communication from the team is below.

After dominating the opening round of the 2020 Michelin MX Nationals at Hawkstone Park earlier in the month, the SJP Moto team headed south to the Cornish circuit of Landrake for the second round of the championship. This weekend Charlie Heyman, James Barker, Billy Askew and Lucy Barker were joined by Reece Jones in the Small Wheel 85cc class after missing the opening round due to be on a pre-arranged family holiday.

The weekend started well for the team qualifying. Charlie Heyman took pole position by over five seconds from teammate James Barker in the Big Wheel 85cc class, with Billy Askew tenth fastest. Reece Jones was second fastest with Lucy Barker eighteenth fastest in the Small Wheel 85cc class. In the opening BW85 race, Heyman got into the lead on the opening lap and pulled a comfortable 30-second lead to take the victory with Askew coming from outside the top ten at the start to claim sixth at the finish ahead of James Barker in ninth after a mid-race mistake dropped him out of the top five. The second BW85 race saw Heyman take another impressive twenty-second race win, while James Barker battled all-race long to finish third. Askew had another strong race running in fifth until the last lap and crossed the line in sixth.

In the SW85 class Reece Jones finished third in the opening race, after starting outside the top ten, and worked his way up to second before losing a position in the closing laps to finish third. Lucy Barker had a good ride to finish the opening moto in nineteenth. The second race for the SW85 riders saw Reece Jones involved in a highly exciting race for the win, which saw him take the victory by less than a second. Lucy also had a great second race to finish in an impressive thirteenth position.

Sunday saw Charlie Heyman take another dominate race win, to start the second day off in good form for the team. Billy Askew and James Barker both had good rides with Billy running in third until the closing laps when he slipped to fourth ahead of Barker in fifth. Heyman made it a clean sweep of victories in the fourth and final race to claim the overall win – he now leads the championship by fifty-seven points. Askew took a solid rode to claim fourth overall on the weekend and sits second in the championship behind Heyman. Unfortunately, Barker crashed out of the final race and went to the hospital for an X-Ray on his hand. The DNF dropped him to fourteenth overall and sixth in the championship.

In the opening Small Wheel 85 race Reece Jones suffered a bad start and was twentieth on the opening lap and pushed hard all race long to claim third at the flag, while Lucy Barker rode well for nineteenth. The final race would see Jones take the holeshot and dominate the race to take the victory by over thirty seconds and claim the overall victory. After missing the opening round, Jones has moved up to fifteenth in the championship. Lucy has a good final race of the weekend to end fourteenth and fourteenth overall too. After two rounds Lucy’s now tenth in the championship.

Steve Parkin: “It has been another great weekend for the team, Charlie took another clean sweep in the BW85 class while Reece took the win in the SW85 class. Billy once again rode well in his second national event on the big-wheel bike and sits second in the standings behind Charlie. Lucy rode a solid weekend and is now tenth in the championship, but it is unfortunate that James crashed in the last race.”