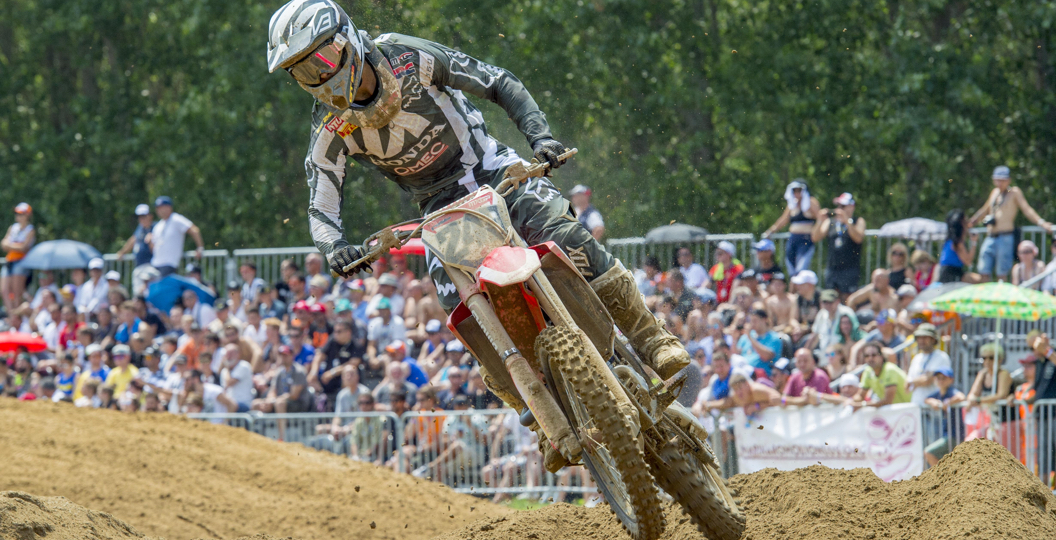 “My dream is to move to America, like I said, and I am quite sure that I will go there one day,” said Tim Gajser in an exclusive interview last month. That has been a hot topic for quite some time now, as he has made no secret about the fact that he would like to travel to the United States as soon as possible. When his multi-year deal with Honda was announced at the Grand Prix of Belgium two years ago, he mentioned it then and he had not even won a title yet.

The knocks that he encountered at the Monster Energy Cup have certainly not deterred him, but that is understandable. There were some glimmers of hope through the one-day programme and the experiment was by no means a disaster. However, despite all of that, Tim Gajser will remain in the FIM Motocross World Championship for the next two seasons at least. HRC announced that he signed a new deal whilst at the Honda Racing Thanks Day in Motegi, Japan, earlier this week. Gajser was already under contract with the manufacturer until the end of 2020, but this new contract ensures that he will not get distracted by the bright lights of Monster Energy Supercross.

It seemed as though it would be difficult for the former world champion to slot into the HRC outfit in the United States in its current form. Ken Roczen is entering year two of a three-year deal, of course, and Cole Seely will not become a free agent until the end of the upcoming season, so there is not exactly a place available for him. Although, admittedly, they could have made room if necessary. There is not a capable replacement in the MXGP series either though, so it certainly made sense for HRC to force him to lead their European effort. Why would they put all of their star power on one continent?

Tetsuhiro Kuwata, a director at HRC, appeared to reaffirm that fact in a statement. “We are very pleased to decide with Tim that he will stay in MXGP for another two seasons,” he mentioned. “Of course, he still has a desire to race in America, but for the short term our focus together is to bring the World Championship back to Honda and we believe that the combination of Tim and the CRF450RW is a very strong partnership to enable us to repeat 2016 and fight for the title again next year. Tim has been working hard and we have been working hard, and we are all confident of another level of performance next season in MXGP.”

Why would HRC make sure that he stays in the FIM Motocross World Championship for the next two years, rather than three? It seems as though it actually makes sense. That is when Ken Roczen will reach the end of his contract and, although they will undoubtedly strive to re-sign the flamboyant German, ensuring that Gajser is in a flexible position will mean that he can be drafted in if there is room or they need a worthy replacement. Everything will be open at that point, whereas their strategy is quite clear until that moment is reached.

It is also worth noting that Jeffrey Herlings will become a free agent soon after that, as his deal with Red Bull KTM will expire at the end of 2020. It is a well-known fact that HRC expressed interest in the Dutchman, who is considered a heavy favourite for the MXGP crown next year, prior to his switch to a 450F. It seems that they will be poised to make another run in three years, as they now have HSF Logistics in their corner. HSF are, of course, a big sponsor of Herlings and their logo can be seen on the top corner of his jersey each week. That too will be an interesting story to follow around the same time that Gajser begins to weigh up his options again.

If Tim Gajser does elect to relocate ahead of the 2020 season, he will be twenty-three. Would that mean that he is too old to make such a difficult switch? Well, although most expats state that they wish they had moved as soon as possible, some have transitioned at a similar age and experienced success. Marvin Musquin was twenty-two when he first moved, but twenty-three when he lined up in an American stadium for the first time, and Dylan Ferrandis was twenty-three during his maiden season aboard a Star Racing Yamaha. It is worth noting that both riders took advantage of the impressive structure that the French federation has in place for youth riders though.

Tyla Rattray and Gareth Swanepoel moved much later in their respective careers, but the former immediately landed on the podium in his first 250SX West event. That debut was delayed by twelve months due to a shoulder injury, however, so he had plenty of time to prepare. Could Gajser achieve the same? Undoubtedly, if he was racing in a regional 250SX series, but he has claimed that he has no interest in that and would like to jump straight into the battlefield that is the 450SX division. That is an unprecedented step.

A move like that is a long way off and although we now know what Tim Gajser will be focusing on across the next twenty-four months, there is no doubt that this topic will continue to arise frequently. A substantial debate is always sparked whenever a high-profile European moves onto pastures new in the United States and the more that this particular switch gets delayed, the more the hype builds.