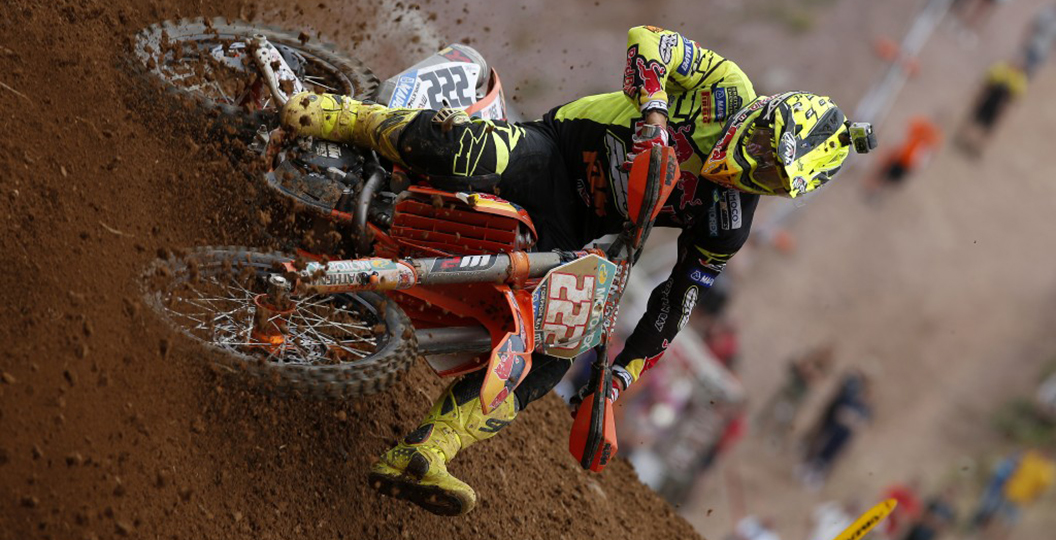 Just when you think there is a chink in Tony Cairoli’s armour and Clement Desalle has figured out how to take the championship title down the wire, Cairoli rebounds with a double win as Desalle falters.

And that is proving to the difference yet again in 2014 as it has been for many years. Cairoli’s competition can beat him in one-off rounds, maybe even a couple of round in row, but the Italian has a ruthless consistency that no-one else can match.

Well,  Jeremy Van Horebeek can match Cairoli’s top three consistency but then he isn’t winning motos like the Italian. Cairoli has a 38 point lead in the championship now, increasing his lead by 18 points in one round. If there had been a points’ swing the other way Desalle would have only been two behind Cairoli, but that’s the difference between the two, Cairoli’s will rarely ever give away that many points at one round.

The Italian makes the most of his good days but it’s making the most of his bad days that also win the championship. This isn’t really a criiticsm of Desalle, Paulin and company because those are going fast, it just shows how brilliant Cairoli really is and just how difficult it is to be that consistent at that level week in week out, even if he makes it look easy.

Cairoli will have eight world titles if he continues in this form for the rest of the season. He is well within reach of Everts record but who could stop him?

Possibly only Herlings or RV, and if the rumors turn out to be true we could have them both in MXGP next season! On paper both may seem to have more raw speed that Cairoli, but RV has only raced in his own country and doing a GP season will be a totally different  experience for the American.

Villopoto, despite his breathtaking speed, still has to show he has the versatility and adaptability required to really be the best in the world outdoors and Cairoli is standing firmly in his way. It would be an epic fight and the biggest challenge of Villopoto’s career.

Herlings might have the speed to beat them both and has the versatility too,  but the big question mark is how much speed does Cairoli have in reserve? While Herlings and Villopoto usually ride at 95-100%, Cairoli generally rides at 85-90%. that is why it sometimes looks like they are faster but Tony rides smarter, he rarely gets injured and the Italian has even mentioned he doesn’t work on his speed because he currently doesn’t need too. When Tony shows his speed in few short bursts, no-one can stay with him in MXGP.

The truth is that Cairoli still has more to give if he is really challenged. If he knows RV and/or Herlings are racing MXGP next season, expect him to get even faster in 2015. Despite edging towards thirty, Antonio Cairoli is still very much the king still to be dethroned in outdoor motocross.

The question still remains, who will rise to the challenge and not miss the opportunity to win a world title against one of the greatest riders ever in the sport?