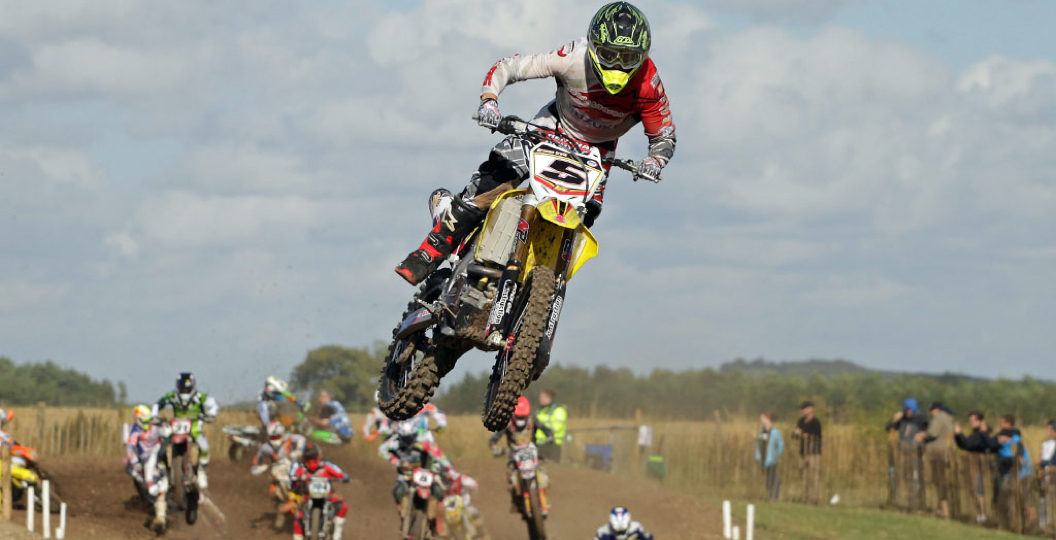 The penultimate round of the Maxxis British Motocross Championship at Cusses Gorse in Wiltshire was successful for Heads & All Threads Suzuki with all three team riders collecting points.

While Cusses Gorse is more well-known to riders as a practice track, world championship track designer Justin Barclay had prepared the track well for the forecast inclement weather, the worst of which passed through overnight and in the morning. Subsequently, qualifying for both classes took place in wet conditions. Whereas Luke Burton had to be content with a twenty-second place, Jordan Booker improved his score of eleventh in the super-pole to finish tenth. MX1 rider Graeme Irwin ended both qualifying and super-pole in fourth.

For Irwin, the day couldn’t have gotten off to a better start. Consistently in third behind world championship rider Shaun Simpson and reigning champion Kristian Whatley in the first two races, there were distinct signs of Irwin only warming up for the final race, as a gap of seventeen seconds in the first shrank to two in the second. The final race was his chance to shine. A massive holeshot launched Irwin into the lead, a lead that lasted for all but three laps and which was cut short by an equally massive crash. While it took Irwin a minute to gather himself up and remount, six other rivals streaked past, leaving him seventh at the chequered flag. Despite this less-than-stellar result, Irwin was called back to the podium to step onto the third step.

Booker improved throughout the day; the first race saw steady progress with a finish in eleventh, while the second was a consistent race in twelfth before a stall cost Booker four places for a finish in sixteenth. The final race, despite an early race incident, was to be his best with a finish in eighth, thanks to some innovative thinking. Three solid results earned Booker eleventh place on the day.

Burton had reason to be pleased at the end of the day. After his previous weekend’s results, improving his results progressively over the day was a relief. The first race ended in nineteenth after a start in mid-pack, while the second race was consistent and solid in fifteenth. The final race looked to end in the top ten, a new achievement for Burton, but after some small mistakes, he slipped back to thirteenth at the finish for a seventeenth overall on the weekend.

“Great day today. The MX2 guys were fine, Jordan rode the last race real good and Luke had a really good day as well with his best results ever. And Graeme, after that race I would say that today all day he’s ridden on another level. The last race also on another level, riding easy, in control, and then one mistake and it’s all gone. The poor kid doesn’t seem to get a break when he needs a break, you know? He had the others beaten fair and square and it was taken away, so we’re gutted really.” — Neil Prince, Team Manager

“Today was going really good until just a couple of laps before the end, I came over one of the big step downs and yeah, massive crash, the biggest crash I’ve had in a while. I threw the podium away before but I wasn’t going to give it up again and got back on the bike and luckily enough got the podium, which is the best thing that’s happened today.” — Graeme Irwin, MX1 #5

“In qualifying I had a bit of a hiccup, I took two sets of goggles and the rain got behind the tear-offs. I should’ve gone with roll-offs, an amateur mistake really, so average qualifying for me really in twenty-second. In the first race finished nineteenth, in the second I got a better start and passed a few guys, which is really hard to do around this track. It’s a good track but so tight and technical, and everyone was running around the same pace, which is good and where you can capitalise on other people’s mistakes. In the last moto I got a good start again, came around the first corner in twelfth, made a couple of passes and went backwards after making a few mistakes, tightened up a little bit, but had a rhythm and brought it home in thirteenth.” — Luke Burton, MX2 #40

“Today was a better day overall. I qualified tenth, which is the best I’ve qualified on the bike. I felt I could’ve done a bit more, I think the times were really close so a second would have put me up to fifth or sixth. I struggled with my starts all day, and in the first two races I kind of got stuck in a rhythm behind some guys. In the last race someone pulled a kamikaze move off the big tabletop and I had to dive off the side of the track and I was really lucky not to get landed on. I lost several places but I started to explore the track to find new lines, and in the last ten minutes I made a real hard push in and got myself up to eighth. I had good speed in the last race and for the first time felt really comfortable, the bike was working really good and Neil and I have it working really great now. It’s a step in the right direction, I just have to try and get some better starts and just get up there.” — Jordan Booker, MX2 #114