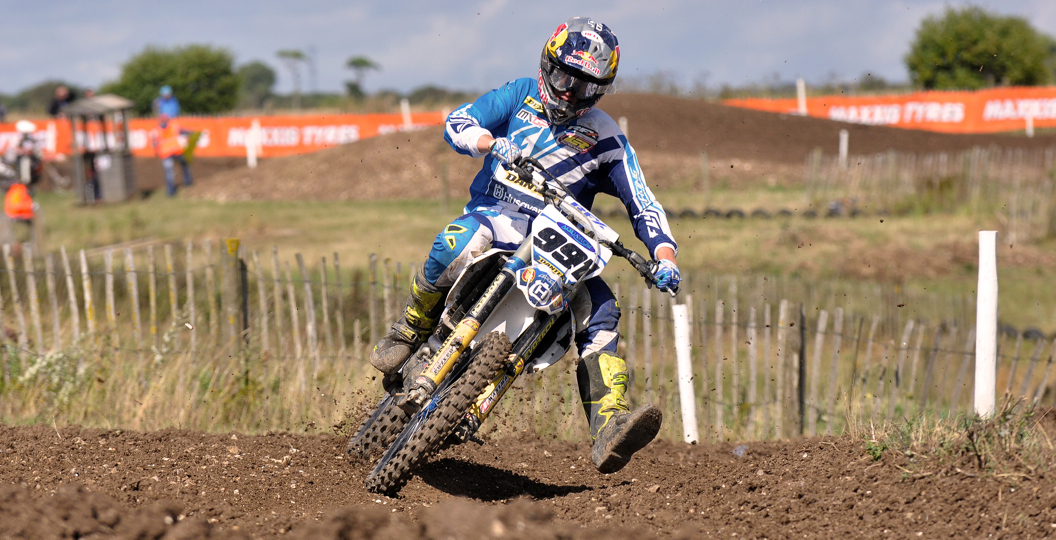 The Dantec Husqvarna UK team made the trip to Cusses Gorse for the first time this past weekend, as the venue hosted the penultimate round of the premier Maxxis British Championship. Testing conditions made it tough on everyone, but the squad still left the round with a podium finish.

On a track that most riders were a similar speed on, Steven Lenoir qualified seventh following the MX2 superpole session, whilst his MX1 teammate (Nathan Watson) ended the timed sessions in third. In the MXY2 class, Tony Saunders went to the line nineteenth.

Steven Lenoir started the first MX2 encounter in fifth and swiftly moved into fourth after a couple of laps. The riders were neck and neck for the duration and Steven was desperately trying to force his way into third. Unfortunately he just missed out on the spot, and lost a position in the closing stages, so ended the moto in fifth. The second moto was slightly more eventful for him, as he started sixth and got shuffled around in the opening laps. Eventually he worked his way forward from seventh and his fitness really shone through, as he clinched third with three laps remaining.

Although Lenoir occupied third for the entire final moto, it was an impressive race, as he was pushing the limits with the leaders – he finished just six seconds down, one second back of the runner up spot. Lenoir finished on the overall podium yet again in third, thanks to his consistent finishes, and made progress in the series standings.

Mediocre starts hindered Nathan Watson all day, unfortunately. After starting ninth in moto one, Watson latched onto the group in front of him and made progress in the second half, as he picked off a handful of guys to eventually finish sixth. Race two was quite similar for him. After starting outside of the top ten, he chipped away for the twenty minutes and salvaged a seventh in the moto.

Watson had his work cut out for him in the third and final MX1 moto, as he started outside of the top twenty on a track that was difficult to pass on. However, he was one of the only riders that made consistent moves, as he climbed up through the field. In the end he captured eighth with a last lap move, which put him eighth overall on the day, just three measly points outside of the top five.

In the opening MXY2 moto, Tony Saunders was able to improve on his qualifying performance, as he started sixteenth and clawed his way through to a respectable twelfth. Tony had a much better start in moto two, as he was inside of the top three on lap one; however, a fall scuppered any chances he had of capitalising on that positive start. Saunders still got up and continued on, despite being a lap down, and salvaged one valuable point.

The team will visit Culham for the second time this year in two weeks, for the sixth round of the MX Nationals.

Nathan Watson: “Qualifying went well; I was second to Shaun and then third in the superpole. The track was very fast all day and hard to make time as everybody was running a similar pace. I gated around tenth in the first race and came through to sixth, which I wasn’t happy with. In the second race I gated even worse! I was around fifteenth and managed to get back to seventh, but it wasn’t fun. The roost was really sore and it was very difficult to pass.

In the last race I wanted to get a good start and finish where I know I can, but I had a little coming together with EBB up the start straight and had to get on the brakes, so was last around the first turn. I managed to get back to eighth. So overall it was a very bad day, as I should have been way higher up, but everyone has bad days so I just need to forget about it and improve for the next race!”

Tony Saunders: “The weekend wasn’t the best – I lacked some speed in qualifying and finished eighteenth. In the first race I had a bad start and lost my goggles on lap two, it was hard to pass so I finished twelfth. In race two I started off second and went back to fourth on the second lap, but then I had a crash with another rider and winded myself. I went back to last and came back to twentieth, but I was nearly a lap down by the time I got up. Hopefully I have a better result at the last round at Foxhill!”