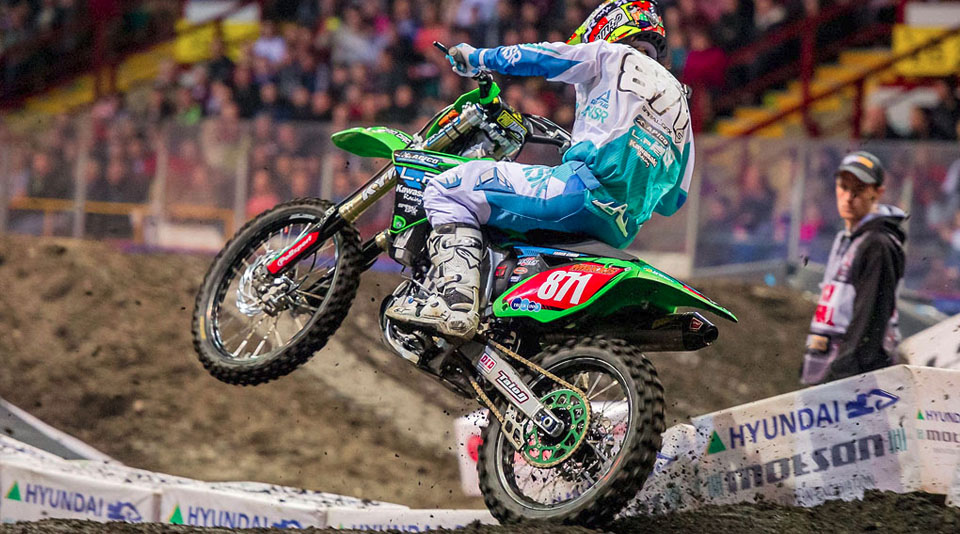 The fifth stop of the Garmin Arenacross UK tour saw the Apico LPE Kawasaki team return to action at the Metro Radio Arena in Newcastle. After a challenging weekend in Liverpool the team were looking forward to a better weekend.

Sunday morning’s practice and qualifying session allowed series leader Fabien Izoird and Loic Rombaut to quickly adjust to the new circuit layout. On one of the most technical tracks of the tour so far, both Fabien and Loic were able to produce solid lap times to qualify in 2nd and 8th places respectively.

Once the smoke cleared and the lights raised for the first race. As the gate dropped for Fabien and Loic’s opening heat, Fabien fired into the first turn behind Kristian Whatley, while Loic suffered a bad start but quickly moved into 5th on the first rhythm section. As the race went on Fabien was having a good battle with Coulon for the second place with Loic in fourth. Drama happened on the last lap when Whatley crashed and handed the heat win to Izoird with Rombaut in third place.

In the Head to Head races Fabien Izoird battled his way to the final and took the win ahead of Cyrille Coulon to claim the four extra championship points, while Loic Rombaut unfortunately went out at the first hurdle.

The main event saw both Fabien and Loic make strong starts and put in a few solid laps early on in the race. Fabien settled into a rhythm and rode smart on the tough track that was claiming a number of victims and didn’t want a repeat of the crash at Liverpool. Loic suffered a few small mistakes and lost a couple of positions and finished  behind Fabien in sixth, while Izoird rode strong to take third place and extend the points lead.

At the end of the evening, Izoird now leads the championship by 17 points with Rombaut in fifth place and 10 points behind Coulon in third place. The Apico LPE Kawasaki team continue to lead the team championship by a healthy margin of 27 points over MBO Yamaha in second. The Garmin Arenacross UK tour now continues to the teams home round at Sheffield next Saturday.

Fabien Izoird “I’m happy for tonight’s results in the championship standing, but I had the speed to win tonight in the main event. After the crash last week I wanted to play safe and get the points rather than risk crashing. I won the Head to Head so those points will also help.”

Loic Rombaut “today was not so bad although I didn’t have a great feeling with the track. I finish sixth in the final and that is good for the championship and I’m still close to second and third in the points.

Steve James “today has been really tough for everybody, the track was very technical which is good but the ground was very soft so it made the take-off’s and landing more difficult. It was the same for everyone out on track and it was just a case of trying to do the best you could with what was in front of you. We had a great start to the day with Loic having two third places in his 2 heat races and Fabien winning both his heat races plus he also won the head to head races which gained him another valuable 4 championship points. This meant that both Loic and Fabien transferred straight into the main event and we as a team decided to slow things down a bit and play it safe in the final. The main goal was still to win if we had the opportunity, but not to push for the win if there was a risk of making any costly mistakes as we didn’t want a repeat of last week. The game plan was to stay on the bike, finish the race and take the points. Both riders did just that and got respectable results with Loic coming home in 6th and Fabien on the 3rd and final step of the podium. I was very happy with the outcome and both riders came away healthy. Loic is now fifth in the points and still in a good position to fight for top three in the championship. Fabien came away with a 17 point lead in the championship and retains the Red Plate, we also increased our lead in the team championship so we just need to keep our heads down and work hard and remain focussed for the next two rounds.”

Newcastle was to be a good weekend for the SJR Kawasaki squad at round five of the Garmin Arenacross UK tour. During the morning practice and qualifying session both Ryan Voase and Erki Kahro produced some good lap times. Erki showed that as he gains experience on the Arenacross scene his speed is improving and his confidence is increasing.

In the opening heat Ryan started in third place and was going well until a crash in the whoops put him out of the race, in the same heat Kahro finished in 8th. In the second heat both Ryan and Erki were in the same heat again and suffered bad starts and mistakes, which saw them finish down in 8th and 9th places.

In the LCQ neither rider got a good start and were unable to progress forward and missed out on the Main Event.

Ryan Voase “tonight was eventful, it was really difficult and challenging but I got though the night in one piece and I’m happy.”

Erki Kahro “it started off good today in the qualifying and my times were much better than the other rounds. In the first heat I was 8th which was decent and then I stalled in the second heat and messed the start up in the LCQ, but it’s all good experience.

Steve James “both riders are gaining momentum each week and they both rode safe and well. They were unlucky to miss the final but next weekend is our home race at Sheffield and we will be aiming to get both teams riders into the final and putting on a good show.”

All images remain the Copyright of the Photographer and E22 Sports