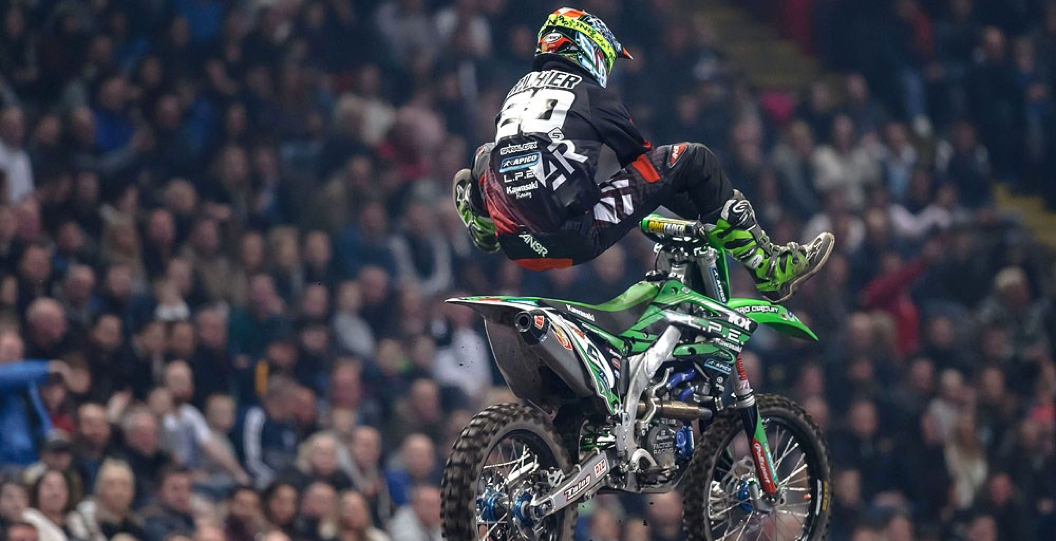 Fresh from the off season, the reigning Arenacross UK Tour champions arrived at the opening round of the 2015 tour at the Phones4u Arena in Manchester. This was to be the first time that the Arenacross UK Tour had visited the city of Manchester. For the 2015 tour the LPE Kawasaki Racing Team unfortunately lost their reigning champion Fabien Izoird after suffering a back injury, and Frenchman Florent Richier was called upon to replace Izoird and line up alongside last year’s rider Loic Rombaut, also joining the team for the 2015 Tour is Jimmy Margetson in the Rookies class.

The opening round of the tour started with the practice and qualifying session during the daytime, allowing the riders to get settled into the track and start to produce faster lap times as the sessions progressed. In the pro classes Loic topped his group to finish third fastest overall while Florent finished tenth. In the rookie class Jimmy finished eighth fastest in his first attempt at Arenacross.

As the lights went down and the fireworks went off it was time for the night show to start and in the opening race of the evening it was Loic out on track first and suffered a mid-pack start, but quickly pushed forward into sixth place in the opening laps. Loic continued to push hard and finished in a solid sixth. Next up was Florent in the second heat race and as the gate dropped, Florent fired into the lead and took the holeshot. With a clear track ahead Florent rode smart to take the race win.

Before the pros returned to track it was time for the Rookies Final and Jimmy started in eighth but moved into sixth place by the end of the opening lap. Once in sixth place Jimmy was looking comfortable and advanced to fifth after another crashed. As the race came to a close Jimmy made a couple of mistakes and slipped to seventh place at the finish.

The second set of heats saw both Loic and Florent in the same heat and as the gate dropped Loic started in fourth with Florent back in eighth. Unfortunately Loic crashed at the end of the opening lap and remounted in last place. Meanwhile Florent was pushing hard and soon into fourth place and pushing the leaders. With all the chaos going on at the front Florent was able to move into the lead and take the race win and head to the Main Event as top points scorer. Unfortunately Loic crashed later in the race and remounted at the back of the pack to finish seventh, unfortunately this was not enough to go straight to the Main Event and sent Loic to the LCQ.

In the LCQ Loic got boxed in at the start and was seventh early on and with only two riders advancing to the main event Loic had a lot of work to do. As the race went on Loic moved into fifth and then fourth with a lap to go but it was not to be enough.

Next on the timetable was the head to head and with championship points on the table Florent was looking for a good result. In the first heat he made light work of Adam Chatfield, and then in the semi Florent was up against Thomas Ramette and after getting into the lead, Florent slipped off the bike and lost the race. After losing the semi-final Florent headed to the line for the consolation final against Ashley Greedy and took the win.

The last race of the night was to be the main event and there was drama before the gate even dropped with a number of riders hit the gate while Florent stormed out of the gate and took over second place. As the race continued Florent came under pressure from Angelo Pellegrini and temporarily dropped to third until Pellegrini crashed out handing Florent a solid second place finish, to start the season off in strong form. The team now have less than two weeks until they head to Belfast for rounds two and three.

Florent Richier: “The weekend started hard for me as the track was soft and I’m not used to riding SX in these conditions but in the races I felt more comfortable and found my lines. In the races I got some good starts and rode well and in the Main Event I was second and could have taken the win but I wanted to make sure that I finished and second place is still good for the championship.”

Loic Rombaut: “This weekend has been hard for me. I had the speed during the daytime but in the heat races I made too many mistakes and suffered from bad starts and had to go to LCQ. In the LCQ I made a bad start and could only get up to fourth, so no main event for me this weekend.”

Jimmy Margetson: “I really enjoyed tonight, it was my first time doing Arenacross and I rode a little bit tight and made a couple of little mistakes but I’ve learnt a lot and look forward to the next event.”

Steve James (Team Manager): “Today started pretty well but going into tonight we unfortunately had a mixed bag of results, in the rookies Jimmy rode great in his first ever arenacross to finish the final in 7th following a bad start. During the race he had worked his way up to 5th but slipped off in a corner 7th is still a credible result though and a great start to the championship for him. In the heats for the pros, they went really well for Florent as he won both his heats and transferred straight to the main event with first gate pick, but unfortunately for Loic he suffered some bad luck in the second heat and crashed twice and had to go the LCQ. In the LCQ he didn’t make the start needed and had to settle for 4th and missed the main event for the first time, but we have seven more rounds to go and I know things will turn around and be better for Loic at the next round.

“In the head to head Florent won his first one and was leading the semi until he slipped off and had to settle for third, but that still gave him two vital championship points. Then in the main event Florent made a good start and rode smooth and safe he was passed by Pellegrini for second who would then crash out soon after. Florent rode well to finish second and on the podium taking the 18 points and with the 2 extra points from the head to head he sits in second in the championship just 3 points behind Ramette who took the win tonight and even though Loic had a tough night he still scored 3 valuable points which added to Florent’s points gives us third on the night and third in the team championship standings.

“So, even though we had a tough night, we still came away from the first round with something we can work on and hopefully chip away at. We now have two weeks to do some more testing and prepare, so we can come out strong ready for rounds two and three at Belfast.”