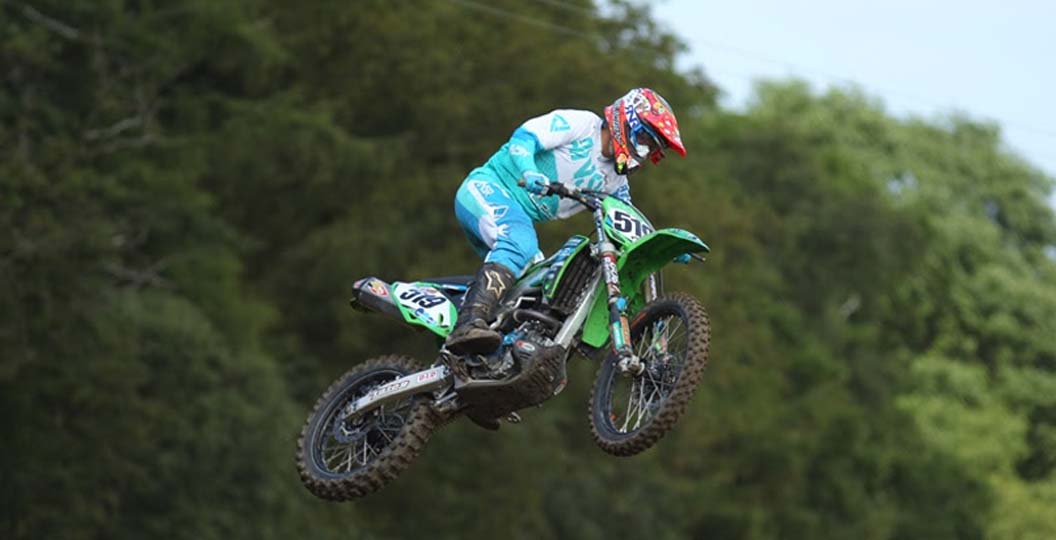 Whitby marked one of the local rounds of the Maxxis ACU British Motocross Championship for Apico LPE Kawasaki Racing team. With the event being near to the team base, everyone was hoping for a strong result. At Whitby Gert Krestinov was joined by the team’s Arenacross rider Loic Rombaut on a guest ride for the event.

Overnight rain and a heavy rain shower on the Sunday morning left the track very slippery before the practice and qualifying sessions. In the MX1 session both Gert and Loic produced good lap times that saw them progress into the Superpole session. At the end of the Superpole lap Gert finished 8th fastest with Loic just behind in 11th.

After the lunch break it was time for the first race of the day and as the gate dropped both riders rounded the first lap inside the top 15. As the race progressed Rombaut quickly moved into the top 10 and continued to push forward and was up into fifth when Whatley retired from the race, giving the Frenchman a well-deserved fourth place. Krestinov rode a strong race to come home in sixth place after complaining of stomach cramps.

The second race saw Krestinov and Rombaut start out in 11th and 13th place and move into the top 10 on the opening lap. Both riders struggled to progress any further forward and ended the race in 8th and 9th places respectively.

The third and final race of the day saw both riders struggle on the start, but were both able to take advantage of the carnage on the track at the finish line and make up a number of places. Loic had quickly worked his way into 6th place and continued to push forward into 4th place. Meanwhile Gert was pushing forward and passed Graeme Irwin for 9th place. Unfortunately the race was cut short due to an injured rider. Once the race result was declared, it was to be Loic Rambaut who made the overall podium with third overall thanks to the pass by Gert on Irwin.

Also competing at Whitby was Jimmy Margetson in the MXY2 class, Jimmy was drafted into the team to replace the injured Ben James. In qualifying Jimmy produced a good lap time to finish 23rd fastest. The first race of the day saw Jimmy start in the mid pack and move up as high as 18th before finishing 20th and securing a championship point in his first ever British Championship event. In the second race Jimmy started well and was running inside the points when he suffered a crash with two laps left and retired from the race.

Steve James: it’s been a good weekend and was mega to get on the podium. Bringing Loic over to race was just as a bit of fun as he wanted to race in England and it paid off. Loic’s results have also helped Gert in the points standing as well. Unfortunately Gert has struggled with stomach cramps and a lack of energy all day, but still came away with 7th overall and now only nine points off fourth. Hopefully at FatCat we can have a strong result and move into the top 4. Gert rode well to salvage the points in all three race on a really tough track. I’d like to thank Loic for coming over and hopefully he can do a couple of other rounds. We also had Tommy Searle working out of the awning and he did a great job for Kawasaki and the fan’s, taking all three race wins. Also in the MXY2 class, with Ben James out injured we offered the ride to his friend Jimmy Margetson and compete in his first British and he rode very well  and had some creditable results. Finally I’d like to thank everyone in the team for all the hard work this weekend, they have done a great job .

Loic Rambaut: this weekend has been really good. The track was nice and like a big supercross track. I got two top 5 results and to get the overall was really good as well for the whole team.

Gert Krestinov: it’s been ok this weekend, points wise it has been good, . My riding today wasn’t great, I wasn’t feeling 100% all day and just stayed safe and got some good points. I’ll now start training in the sand ready for FatCat and get a good result there.

Jimmy Margetson: this weekend has been a good experience, the track was really rough towards the end and I was making silly mistakes, but overall it was good fun.
MX1 Overall Result