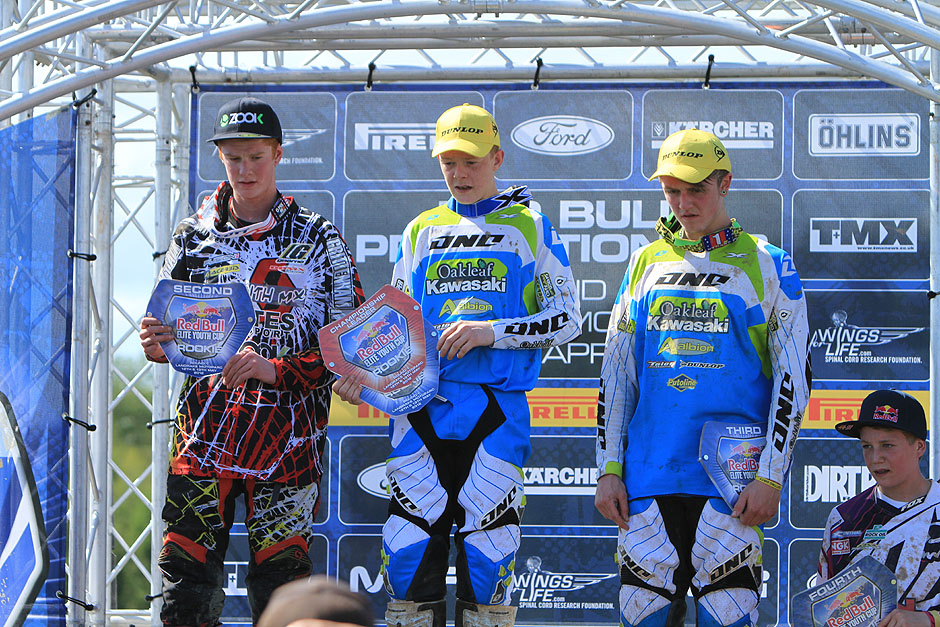 With the bad weather aggravating most of the country the last couple of weeks Landrake Moto Park was alight with some bright  sunshine and the first round of the Redbull Pro Nationals.

With track conditions  perfect on  Saturday  morning it was time for the two Oakleaf Kawasaki  Rookies Jake Millward and Tommy Alba  to show their potential and hard work from the off season. Qualification got under way with 5mins free practice before the tense timed session started to see who will get the 1st gate pick for the weekends races.

It was Jake Millward who topped the screens in the mechanics area with a lap time of 2:01.44 and a blistering  2sec  lead on the next competitor. Tommy Alba was seriously on the pace too early on but as he came past the mechanics area and not far from the finish line a slight mistake with a loss of traction took him off  his rhythm which looked to be his fastest lap and had to settle for 5th with a 2:04.30. This meant both of the Oakleaf boys where in the top 10 and had a good chance of a holeshot with a decent gate pick .

With a busy attendance of spectators and pumped atmosphere, the two Oakleaf Rookies made there way to the line and the first 20sec board was held high to start off the first Redbull  Rookie race of the year Jake Millward was 2nd into the first corner and Tommy Alba within the top 10 , the front postion had changed by the 2nd corner with Jake Millward on his KXF250 taking the lead and was to pull away from the the rest of the 44 riders and take the win. Tommy was forced to work hard and a couple of mistakes was to take him across the line in 7th.

Race 2 was the teams best Rookie race of the weekend with Jake Millward taking the holeshot and again putting the Oakleaf Kawasaki out in front although a slight mistake saw him drop the bike but he still managed to stay in front and take the win. Tommy with a change of suspension was showing he was around to make a statement with a hard battle from 4th to take 2nd place and again showing he gets stronger as the race goes on. For the team it was a very proud moment  to see Oakleaf Kawasaki take 1st and 2nd and the team camp was buzzing

Race 3 and the last race of the day was set and having both riders in good positions it was important to take the Saturday in to the Sunday on a high and in a healthy way. Jake was to cross the line with a second from having a top 5 start and Tommy in 5th although one more lap and he looked confident enough to take two more positions only to run out of time but all in all both riders showed great work effort and potential

Sunday again was a cloud free day but a slight wind that cut across the track over night was to dry it out and the event 22 organisers were on hand to prepare the track for another top days racing. Oakleaf Kawasaki’s Alex Snow make his appearance in the PRO MX1/MX2 class and they had first test of the extremely well prepared Landrake circuit with a 20min free practice session. Qualification was up next for Alex and he set the 9th fastest lap time of 1:59 and a good starting position although confidence was high for him to take the holeshot.

Next up was the first Rookie race of the Sunday and again a packed start line with clean prepped bikes gleaming in the Landrake sun  the gate was to drop and Jake and Tommy was to enter the first corner both in the top 12, within 3 laps the race was in full swing and Millward had moved up to 2nd with 4-5 seconds to make up on the front runner. Tommy had moved up in to the top 5 and both Oakleaf boys where on a charge, Millward was to make up ground on the front rider and put him under enough pressure to make a mistake and take the win with Tommy crossing the line for 4th.

The Pros were on the line for Race 1 and Sunday’s atmosphere and crowd had grown from Saturday with everyone wanting to see the best riders in the UK and some from across the world battle it out. The gate was to drop and a fast aggressive pack of 45 riders was to charge into the first corner with Oakleaf Kawasaki’s Alex Snow aboard his kxf450 with good start in 2nd place the weekend had just got better, he was to hold his position for a couple of laps and it wasn’t long be for the ruts and racing lines were to get bigger and rougher. Alex came across the finish line in 6th but the 5th mx1 and the 2nd fastest Kawasaki although a great result, he still wanted better in the next .

Having Alex under the awning  showed to be a busy and exciting day for the team. Some fine refreshments and hospitality laid on gave the team time out to regroup and structure the final part of the  day ahead.

It was race 5 and the biggest race for the Rookies as this would take their positions to the next round at Fatcats. The gate was to drop and it was Millward with the holeshot and Tommy Alba in 4th. Jake was to make good ground on the chasing pack and began to settle into his rhythm and show his class until he came across a back marker with 3 laps remaining and hit the dirt , he remounted in 5th and Tommy was hot on the heels of 2nd. This race had all the crowd fixed with a massive battle at the front , back markers were playing their part and it was making it hard to find a decent pass. At the finish flag  Alba was to settle for 3rd and Millward for 5th but this was to see both Oakleaf Kawasaki Rookies take their well deserved positions on the Redbull podium with Jake Millward in 1st overall and Tommy Alba taking a hard fought 3rd overall

After the hype of the Rookies it was back to the Final Pro race of the day and again Alex Buzzing with confidence and now really settling in to his new team. Aboard his kxf450 he managed to blast into the top 5 coming out of the first corner and was chasing hard on 4th. You could see he had his full confidence back and was certainly showing his skill and style but the front runners where all showing great speed and not a lot of change in their positions. Alex was to drop one place in the closing minutes and come across the line in 5th and  the 2nd Kawasaki rider, but until he was back in the pits it was revealed a slight exhaust problem made him not fulfill the full potential of his race but he used his experience to settle for what is a good start to his Redbull championship championship as he lies in 6th and is ready for round 2.

All in all a great weekend for Oakleaf Kawasaki and they would like to thank all involved .