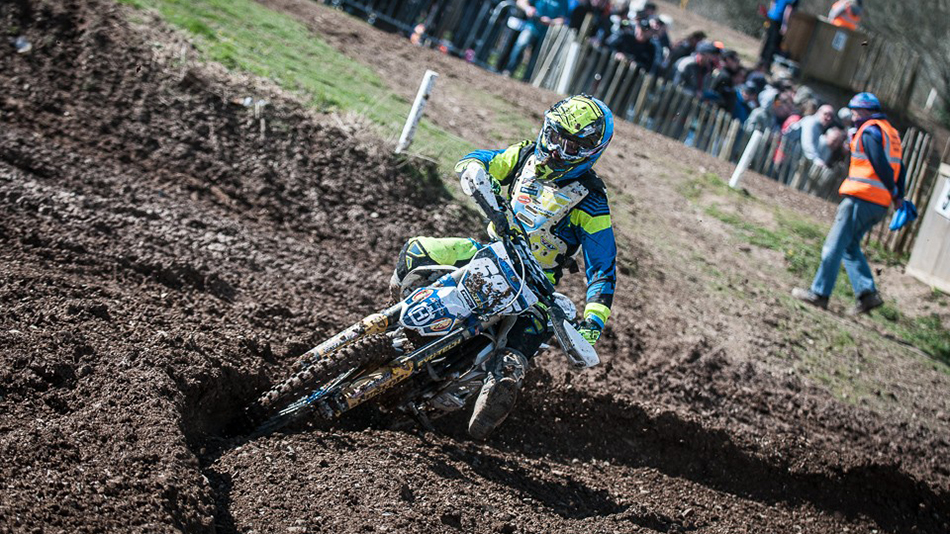 The Dantec Husqvarna UK team made the long trip to Cornwall for the opening round of the 2014 Maxxis British Championship this past weekend, which was held in sunny conditions at Landrake.

Both Steven Lenoir (MX2) and Nathan Watson (MX1) had a great showing in their respective qualifying sessions. Steven ended the MX2 session in the runner-up spot, which put him in a good spot going into the points paying motos. Nathan was fifth in his first qualifying session, and a respectable seventh in the super-pole.

Steven Lenoir rocketed out of the gate when the first moto of the new season fired into life at midday, as he ended lap one inside of the top three. Lenoir had a very consistent ride; he maintained a solid pace throughout the moto. In the middle of the race, he slipped to fourth, but his fitness prevailed in the closing stages, as he retook third before the end.

In moto two, Steven looked set to climb onto the podium – he started fifth and moved into fourth early on. Unfortunately he ran into a small issue on the sixth lap, as he lost two spots. However, Lenoir continued pushing forward, as he finished fifth. The Frenchman returned to the podium in the third and final race, as he started sixth, and passed many of his fellow title contenders on his way to second. In the end, he was just one second down on the winner.

Nathan Watson had his work cut out for him in the first MX1 moto, as he ended lap one just outside of the top twenty after getting caught up in the first lap mayhem. Nathan ended up seventh, as he kept pushing forward throughout the race. The second race was very similar, as he again had a poor start and had to move through the field. Watson had another strong ride though, as he once again made his way into the top ten; he finished eighth.

In the third and final MX1 race, Nathan showed heart and determination to finish nineteenth and score two points. Watson had a better start to the moto and quickly moved inside of the top ten. However, disaster struck in the closing stages; he had a big crash over a jump, which sent him flying. Although the crash damaged many parts on his bike, Watson continued in an attempt to score some points, which he did.

Overall it was a positive day for Dantec Husqvarna UK team, as Steven Lenoir took his bike to an impressive third overall in the MX2 class, and Nathan Watson still grabbed ninth overall in MX1 despite his crash in race three. The team will be at Culham next weekend for round one of the MX Nationals, before heading to Lyng on the first weekend in April for the next Maxxis British Championship round.

Steven Lenoir: “I had a solid day – I left 2013 on the podium, and have started 2014 on the podium again! It felt good to be back in the Maxxis British Championship, the level is really high this year, but I want to win. I’ve got a few things to work on with the team and myself, but overall it was great. I’m also pumped about my fitness thanks to Kirk. I was pushing at the end of each race, but it took me too long to get into a good rhythm. It’s a shame about what happened in race two, but this is racing. We’re going to get better – roll on round two!”

Nathan Watson: “I enjoyed the track and felt good. However, I didn’t get the results I wanted due to bad starts on a track where starts were key! The crash ruined the day really; it was a pretty consistent day until that happened. I just lost the back end going up the face of the finish tabletop, then it gripped and fired me sideways towards the fence so I jumped off.”