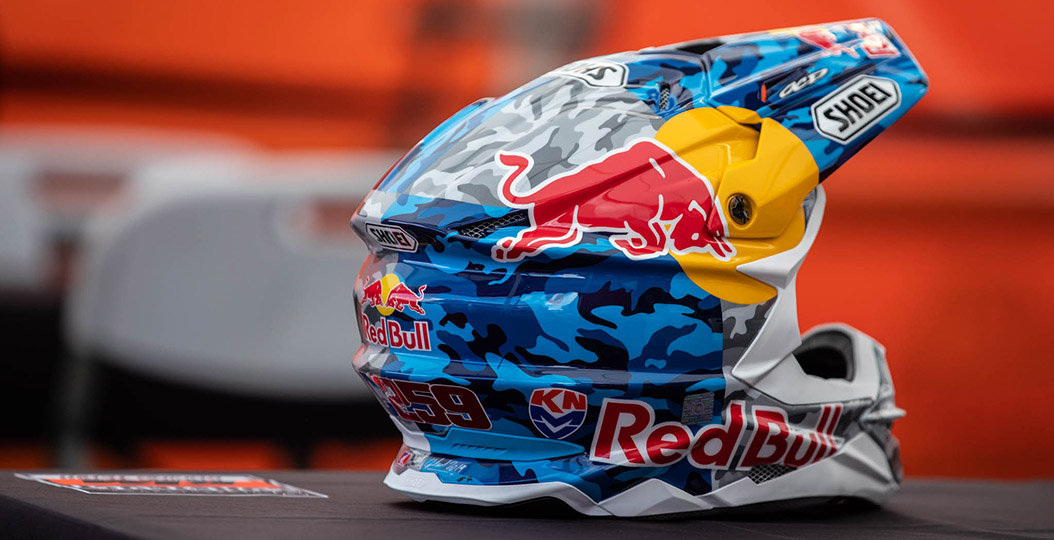 The 2019 FIM Motocross World Championship is moving forwards! The tenth round of eighteen will be run at Teutschenthal, in Germany, this weekend. Like an event in Belgium or France, German races are often one of the biggest for the industry and thus there are plenty of interesting things to see around the paddock. If you are not here this weekend, this little guide from awning-to-awning will be interesting.

Glenn Coldenhoff has a camo-themed custom helmet this weekend from Red Bull.

On the handlebars of Arnaud Tonus’ YZ450F, Monster Energy Wilvo Yamaha MXGP has incorporated their own map switch control.

We also noticed Monster Energy Wilvo Yamaha MXGP have been using Suter clutches for the past few rounds, having started the year with Rekluse clutches.

OC1 Off-Road Cleaner have stepped up their presence in the paddock recently. They are now the bike cleaner of choice for JWR Yamaha and Honda 114 Motorsports.

(Above) Bud Racing Kawasaki have one of the more unique bikes in the paddock, opting for Ohlins RXF 48S forks and TTX Flow shocks for both Mitchell Harrison and Brian Moreau.

Their custom clutch plates are a nice touch also!

The Fox 74 Show rolls into Teutschenthal this weekend with their third instalment of the season. Regular Hosts Jeff Emig and Georgia Lindsay will host Facebook live sessions throughout the weekend.

The MXGP Academy linked up with the FIM Women in Motorcycling initiative for a series of sessions throughout the day held by John van den Berk and two-time WMX world champion Livia Lancelot.

Valentin Guillod makes his first appearance of the season this weekend aboard a KMP Racing Honda.

The Red Bull KTM awning was looking a little empty earlier today with the news that Antonio Cairoli will sit out this weekend with an ongoing injury resulting from his shoulder dislocation last week. This weekend marks the first time since Lommel 2015 that the team will not contest either of the MXGP races.

Not a bad set up for an EMX125 rider!  I guess it helps when your dad is a ten-time world champion. It is good to see Stefen Everts in the paddock this weekend following his recent battle with malaria.

Delegates from the MXGP of Turkey, set to take place in Afyon on September 7, are in Teutschenthal this weekend to welcome the media to the presentation of the event and to announce that the winners of the MXGP, MX2, WMX and EMX2T classes will be able to enjoy a fantastic holiday in Turkey!