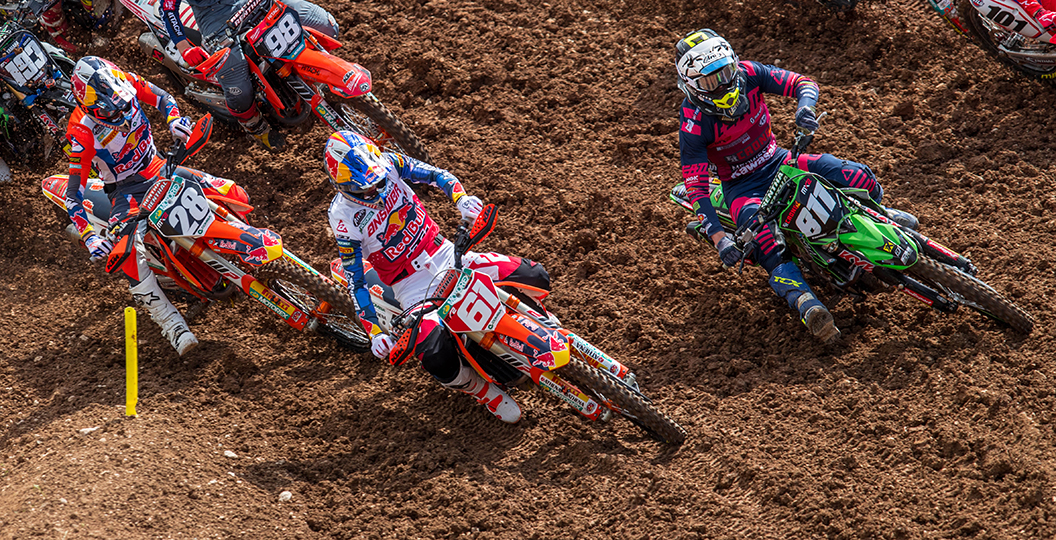 There has been a one-week break in the 2019 FIM Motocross World Championship and yet it feels like an eternity. Hilarious, right? There is a good reason to be interested in proceedings this season, that being the Fantasy MX Manager game that just adds a completely different dimension to proceedings. It is funny how a fantasy game can have such an unbelievable impact on reality.

The reality of the situation is that multiple users are vying for two thousand five hundred euros in vouchers on 24MX. That is a huge prize and has to be taken seriously. How can one take things seriously? Spend time analysing the riders, options and possibilities ahead of the Grand Prix weekend. Simply reading this feature is a relatively good head start. Orlyonok, Russia, is the destination for the riders this weekend and therefore hard-pack is on the cards. Who could that benefit? Tim Gajser springs to mind, but then picking him at such a high price (€600,000) leaves very little wiggle room and is a risk perfect for those in need of a thrill.

Stick to the middle of the road! There are riders who cost around €300,000 who have plenty of upside and could change the face of the fantasy battle completely. Max Anstie springs to mind at €250,000. Why is he so cheap? This is his first race back from injury and therefore he costs less than normal, hence why it is so important that one takes advantage of such a deal! Now, admittedly, some thought has to be put into this, as the same theory could have been applied prior to the Grand Prix of Portugal and he did not score points. The streak of bad luck just cannot continue though! Come on.

Picking Max Anstie certainly makes more sense than Jeffrey Herlings, on paper at least, as €400,000 is the cost of the reigning world champion. There is not much to go off of at this point, but slotting in somewhere between fifth and tenth seems doable going off of what he has said. Is that enough of a return at €400,000? That is not necessarily the point to focus on this time around. Instead it is important to consider the chances of him finishing both races. It seems as though his foot held up well at Rhenen and Moggers, so it is likely that he will complete each thirty-minute stint. It is still worth analysing on Saturday.

The price tag on Arminas Jasikonis has dropped significantly, following a pair of so-so weeks, so he is a steal and worth considering at €300,000. Is the hard-pack of Orlyonok a speciality of his? No, not at all, but round four in Trentino was a successful outing for him and Rockstar Energy Husqvarna Factory Racing. It is peculiar that he has hit a slump in recent weeks though and, by all accounts, there is not a specific reason for it. The starts are certainly not helping and on such a fast track, Orlyonok, starting outside of the top ten just is not going to get the job done. Maybe €300,000 for Jasikonis is more of a risk than first thought?

Arminas Jasikonis has been locked into duels with Jeremy Van Horebeek lately, but the latter costs €50,000 less. If those two were lined up in a shootout fashion then Van Horebeek has to be the better pick, although he is not yet operating at one hundred percent. The shoulder injury that was sustained at the beginning of April has played havoc with his recent results, but he has confidently stated to MX Vice that he will now be in a spot to fight for spots in the top five. Grabbing Jeremy Van Horebeek and Max Anstie at €250,000 each would be quite the team and leave a lot of room to move around.

The pick of the week lies in the MX2 class, most would argue, as Jed Beaton has been cut down to €200,000, following a couple of crash-filled events. Beaton has scored thirteen points in the last four motos, which is a simple way of explaining why he costs so little. Is he going to turn things around in Russia? It really cannot go too much worse, in all honesty, and he does not need to achieve much to show value at his current price tag. A pair of top-ten results would really be unbelievable value and a great boost to any team. The question is, who has faith? That is really all that matters, as everything else adds up.

It is difficult to see other viable picks in the MX2 category, as the potential that Jed Beaton has overshadows others. Dylan Walsh costs the same as his Husqvarna counterpart, of course, but how can one justify picking him? Another Husqvarna pilot, Alvin Ostlund, is an intriguing option, but perusing his recent results quickly douses that fire. Ostlund has not even been in the top ten at any point this term. There is no doubt that he has the potential to do that, so is it worth a punt this week? There is no sign that indicates that he is set to make a drastic turnaround, but he will be a huge pick when he does manage it. It is just risky.

There is no pick riskier than Henry Jacobi though, who has been cut down to €350,000. Jacobi has not fared too well recently and slipped into his old ways, as there have been a lot of crashes that have caused him to lose third in the championship standings. France was just a disaster for him, no matter what way it is looked at, and the ground was not too dissimilar to what will be found in Russia on Sunday. Could another difficult weekend be on the cards? It is tough to predict with Jacobi and, bearing all of that in mind, it is a risk when deciding whether to sign him. The price is tempting this time, which makes him tough to resist though.

Lewis Phillips (MX Vice Editor): Based on all of the above, my squad entering the Grand Prix of Russia is as follows: Max Anstie, Jeremy Van Horebeek, Jed Beaton and Mitchell Harrison. The first three guys are self-explanatory, but how about Mitchell Harrison? Harrison has been rather inconsistent since joining the Bud Racing Kawasaki squad, but has proven that he can launch inside of the top ten at points. The hard-pack of Russia will play to his strengths somewhat and therefore he will do something at €150,000. I also have one team, 114 Motorsports, and Yamaha as my manufacturer. I am somehow €210,000 under budget.