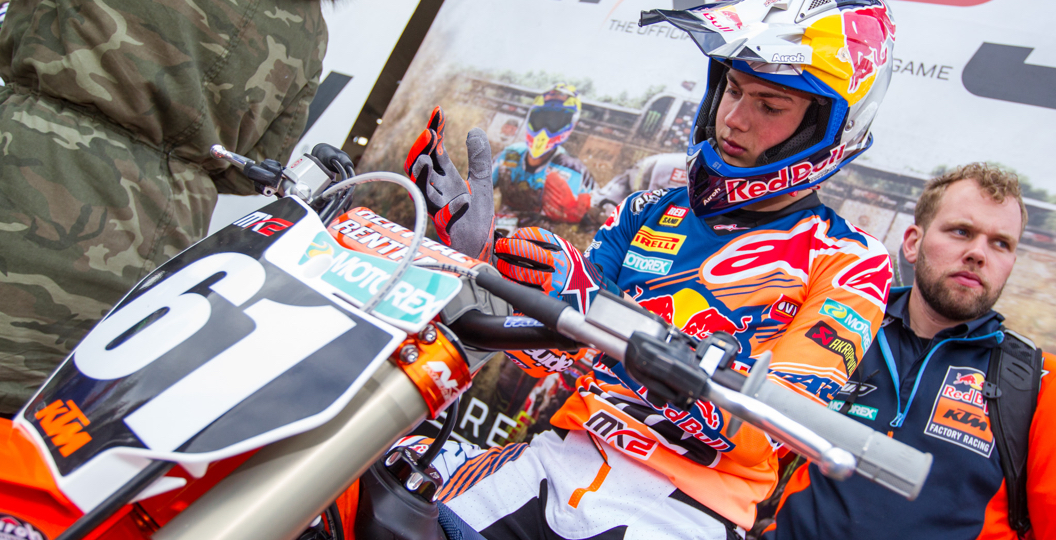 Talents as promising as Jorge Prado Garcia rarely surface. Although Prado, a former champion in the EMX125 category, has completed just nine events as an MX2 rider, he has already entered the prestigious category of Grand Prix winners.

Ken Roczen, Jeffrey Herlings and Tim Gajser emerged from the amateur ranks with the weight of expectation on their shoulders too. In fact, Jorge Prado and the latter have much more in common that one may initially presume. Why? Prado, a Spaniard, claimed his maiden Grand Prix win at the spectacular circuit of Pietramurata just two weeks ago. It was at that same venue that Gajser reigned victorious for the first time two years ago. The similarities do not stop there, however, as a second and a first were the moto scores that took both riders to their respective victories.

The way in which they won the motos at those respective events was similar also. Prado clung onto the top spot for the duration of the second moto and posted some impressive lap times along the way, but was pressured by his teammate in the closing stages. Pauls Jonass (the winner of moto one) was poised to mount an attack, after erasing the deficit that he faced, but stumbled with just half a lap remaining and left Prado to cruise to the victory. That race win was the first of his career.

What occurred during the second moto, the one that Gajser reigned victorious in, at the Grand Prix of Trentino two years ago? Gajser led from the drop of the gate, but was eventually reeled in by the winner of the first encounter (Jeffrey Herlings). The race for the win was on at that point. Herlings had advanced onto the rear wheel of his rival and was then desperately trying to make a move on the final lap. A mistake thwarted his efforts, however, so Gajser crossed the chequered flag in first and stood atop the box for the first time.

Those scenarios sound identical, right? The events that unfolded seven days after each rider claimed their maiden victory were even similar. The Grand Prix of Trentino was followed by the Grand Prix of Europe, held at the sandy venue of Valkenswaard, in 2015 and then again this year. Jorge Prado failed to replicate his performance from the base of Dolomites at that event this year, as two spectacular crashes left him scrambling to obtain points, but he eventually acquired four points with a seventeenth in moto one.

Gajser battled to cope with the pressure at that race two years ago, as he too crashed in a fashion that left onlookers in awe. The results that he obtained were far from what he had hoped to achieve, because of that, as he salvaged a seventeenth in the first of two motos. That gave him four points. The Slovenian did manage to grab a couple more in the second moto, whereas Prado did not.

The paths that Jorge Prado and Tim Gajser take in the future could be similar too, as both riders are eager to make a splash in the United States. Prado was expected to move next year, despite the fact that he is relatively inexperienced, but he exclusively confirmed that he’ll be staying in Europe for an additional season.

“I think we will stay next year, still here,” Prado told us at Valkenswaard. “Of course I would like to be there but, as Pit Beirer says, it is good to have this year as experience and next year show everybody what I am capable of. If next year, for example, I can get the title, it would be good to go to the US as a world champion. That is the plan!”

Tim Gajser was also expected to move next season. Rumours now suggest that he is weighing up his options, however, so perhaps the two will shadow each other one more? Hey, it would hardly be a bad thing if Prado continues to mirror what Gajser has achieved!