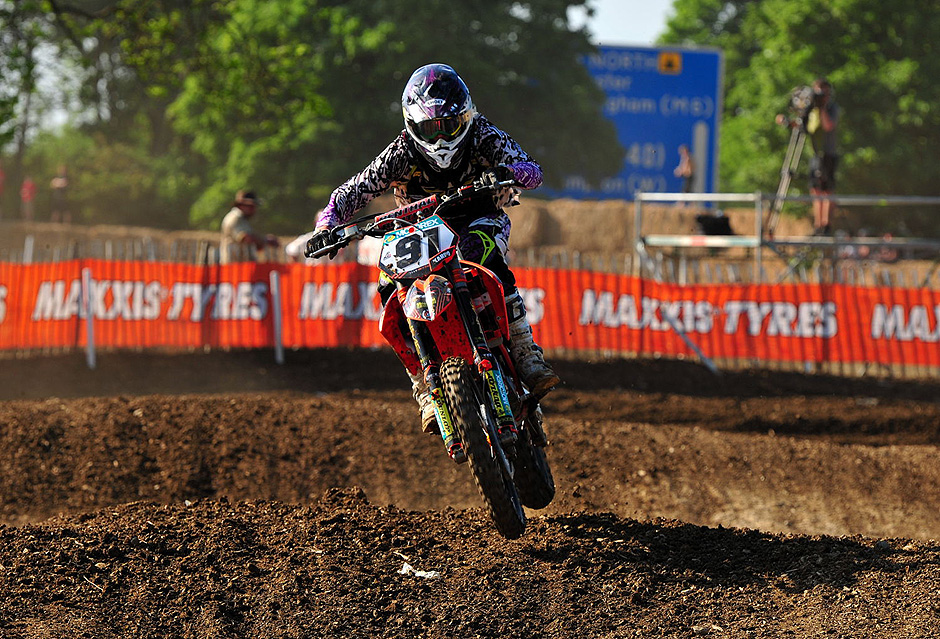 Team STR KTM’s Matiss Karro leads the Maxiss ACU British Motocross Championship after a day to remember in the 4th round at Milton Park, Northamptonshire.

The team only returned to the UK after two weeks of GP action in South America on Tuesday afternoon and had much work to do ahead of the weekend’s riding.

Nathan Parker was struggling with damaged ankle ligaments and Karro was suffering from a cold. As well as that, the mechanics had to face the daunting task of getting the race bikes ready for another tough day’s action.

Parker was tentatively circulating, gradually testing his ankle and could only post 15th fastest but Karro was back in the now customary fight for supremacy with Shaun Simpson and Kevin Strijbos. Strijbos posted the fastest time followed by Simpson and then Karro.

Karro wasn’t finished though and put in a storming lap in Superpole, posting the fastest time and, more importantly, giving him the first pick of the gate for the forthcoming races.

Karro flew out of the gate and straight into the lead but Parker had the worst possible start, crashing in the first turn and twisting his already damaged ankle. His day was over before it had really begun and he will now be out of action until his ankle is sufficiently recovered for him to be able to ride competitively.

After taking the holeshot, Karro sped off into the distance as he lapped at a second a lap faster than the chasing pack. He was able to build up a 12 second lead as he cruised to a commanding win over Stephen Sword in second and Simpson in third and with Championship leader, Stribos struggling with his back brake and only able to finish ninth. This result meant that Karro moved back into second place in the standings and reduced the gap between himself and Strijbos to 20 points.

Karro took his second holeshot of the day, but this time Simpson was on his tail. The two of them had their own personal battle as they sped away from the rest of the field and it looked like either of them could take the win but in the end it was Karro who came out on top, taking his second win of the day by five seconds from Simpson, with Stribos back in third.

Simpson took the holeshot this time out with Karro down in sixth, but buoyed by his earlier performances and cheered on by his legion of cheering fans Karro was up to third by the end of the first lap. Simpson was charging out front and by the time Karro progressed to second the gap between the two was already six seconds. Karro was on a mission and after just three more laps he was on Simpson’s rear wheel. The signs were ominous for the leader and so it proved as Karro made light work of the Scotsman, taking the lead with a smart move before clearing off into the distance at an alarming rate. It was definitely to be Karro’s day as halfway through proceedings Strijbos came to a halt with a split throttle tube and with the knowledge that the Championship lead was now going to be his, Karro strode to the win by 25 seconds from Simpson, lapping up to 13th place in the meantime. This was to be the perfect day, taking superpole, three race wins and the red plate. 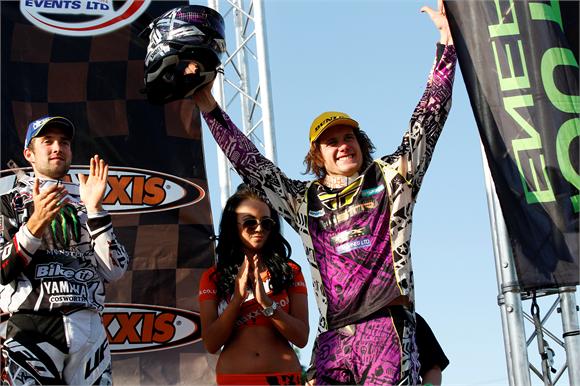 An ecstatic Matiss Karro said afterwards, “this was a good track for me, I didn’t really like the layout but I like the deep ruts and I felt so good. I can’t believe I am leading the Championship. This was good preparation for next weekend’s GP in France and I’m looking forward to that now.”

A dejected Nez Parker said, “ I tried my best but it wasn’t to be, the damage is too bad and I need to take a bit of time off and get it sorted out.”

The jubilant team manager, Steve Turner added, “ I’m in shock, what a day. Matiss was awesome, his first two starts were fantastic and he just blitzed the whole field. I can’t believe how dominant he was today. He’s building up a head of steam which is great for us but not so good for the opposition. If he rides like that next week he should be looking at a top ten GP finish for sure.”

“Nez is out now until his ankle is sorted, he will sit out the next two or three GP’s and hopefully be back for Desertmartin. It’s unfortunate but all part of this tough sport of Motocross. The worst thing is that he rode so well at Lyng and was looking really confident and I was really hoping he was going to be able to build on that.”