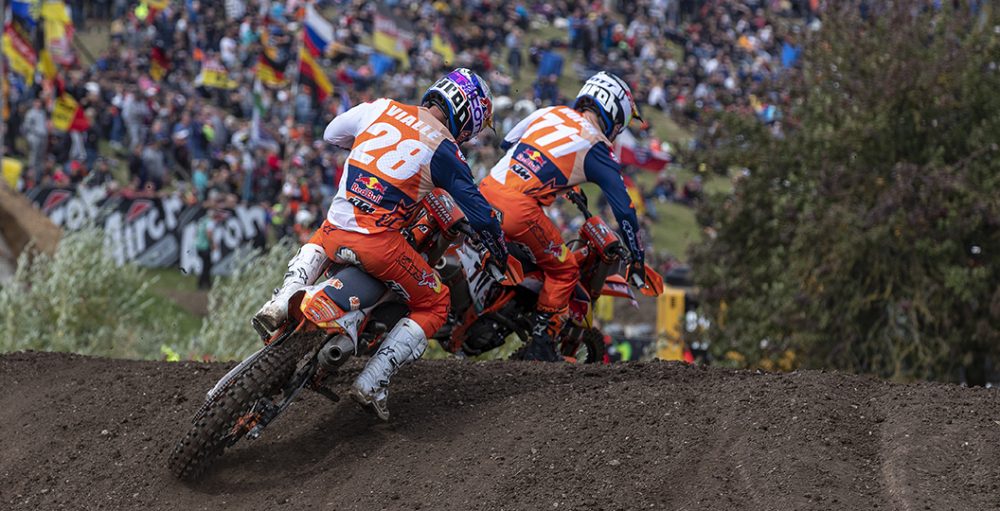 Well, Red Bull KTM Factory Racing had an eventful day. Tom Vialle offered some stability to the organisation and won the overall in the MX2 division with a dominant 1-1 scorecard. Vialle climbed up onto the top of the podium and celebrated his fourth win in succession. Later, a protest from Monster Energy Yamaha Factory MX2 caused the FIM to review the race and hand Vialle a two-place penalty for not respecting waved yellow flags.

Vialle was dropped to third in the results from the second stint, which meant that the win went to Maxime Renaux and second place was handed to Jago Geerts. A 3-1 scorecard meant that Renaux tied with Vialle (1-3) and took yet another overall victory. Vialle was eventually awarded second overall. Rene Hofer was still third overall, just as he was before penalties were handed out.

Vialle later released the following statement on social media and did not hold back his disdain for the decision that the FIM made, as well as Monster Energy Yamaha Factory MX2’s decision to appeal.

“Perfect day, went 1-1 again in Germany. Oh sorry, after the Yamaha protest, they dropped me back to second. I would like to start by mentioning that as a rider I find safety really important, so I would never try to hurt someone else or myself by jumping with a yellow flag. The flag was just not visible and it is not the first time that riders have complained about this issue. The FIM first decided that it was common sense and no penalty would be applied but after one hour they posted another decision without even mentioning it to me in advance. Congrats Yamaha Monster for the victory. Anyway, see you next weekend in France.”

Renaux has extended his championship lead yet again now. 85 points is his advantage over Jago Geerts, his teammate, who nows runs second in the championship standings.