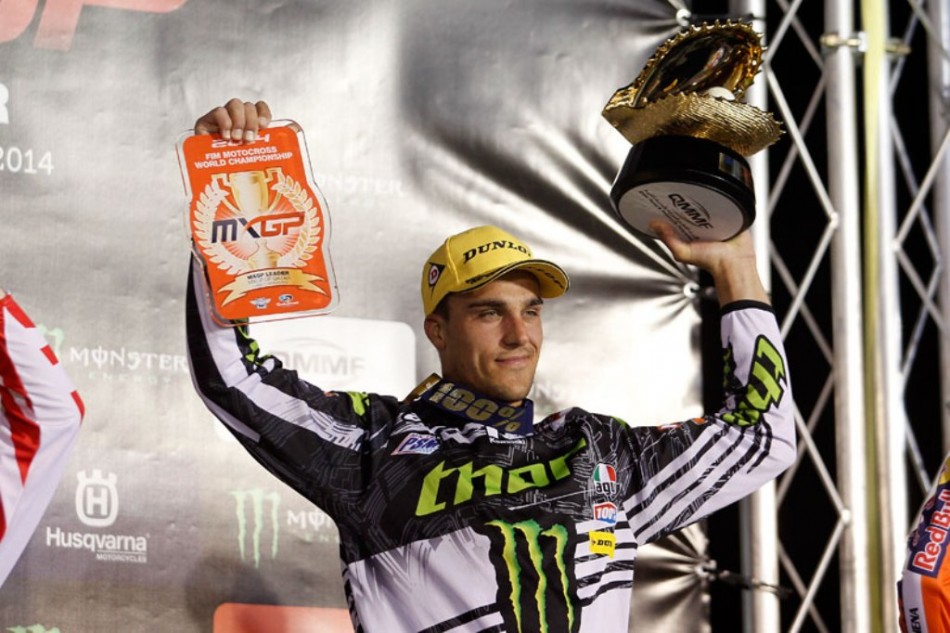 The first round of the FIM MXGP series has seen Monster Energy Kawasaki Racing’s Gautier Paulin take home a stunning victory at the impressive floodlit Losail circuit in Qatar.  The only night race of the 18 round series had Paulin master his KX450F-SR to a 3-1 score and the stylish Frenchman now leads the MX1 series with the red plate.

Having qualified second in the Friday night 20 minute qualification race, Paulin had a good gate pick going into moto 1 on Saturday night.  As the gate dropped for the long awaited opening race, he jumped well but lost out in the first few meters and had to push his way through the pack.  Emerging in 5th he quickly made his way past Cairoli and Bobryshev to grab 3rd place and then he made his move on Strijbos for second spot.  Paulin managed to hold off Cairoli for most of the moto but with a mistake with two laps to go the Italian capitalized with Paulin settling for 3rd.

With some changes to his bike Paulin rocketed out of the gate in Moto 2 and took over the lead from the second turn.  He exchanged the lead with fellow countryman and team-mate, Steven Frossard, but he quickly took it back and succeeded in controlling the race from then onward.  Taking the victory and GP overall Paulin now leads the MXGP championship over Max Nagl and Antonio Cairoli.

“This is great way to start the season and this is a result of the hard work that the Monster Energy Kawasaki Racing team has put in over the Winter.  I was not so happy with the first moto and I had to change my style and some settings of the bike for the second moto.  The changes were a step in the right direction and I was able to ride how I like and I controlled the race from the lead. Our goal was to come away with the red plate and we achieved this. Moving on to Thailand next week,  I enjoyed the track last year but I will approach the race just like any other GP and focus on the race day and the track conditions then, as it could change from last year.” commented an elated Paulin

Round 2 will take place in Si Racha Thailand next weekend, a circuit which Paulin feels confident on as he will defend the MXGP red leaders plate.