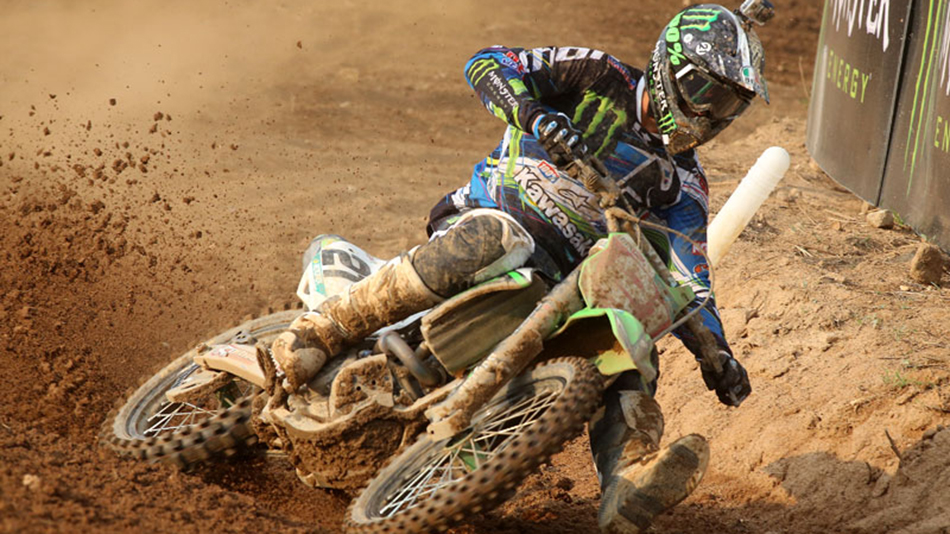 Travelling to Si Racha, Thailand with the red leaders plate, Gautier Paulin was confident that the sweltering heat and rough track conditions would play to his advantage.  What the Monster Energy Kawasaki Racing rider did not expect though, was to be robbed of valuable championship points with a fuel problem caused by locally provided fuel due to an embargo placed by the Thai government which disallowed teams to bring their own regular race fuel.

Setting the quickest lap time in the morning warm up session, Paulin rolled onto the line for the first MXGP moto.  A top 10 start left Paulin with some catching up to do as he quickly pushed his way into 6th on the opening lap.  The British duo of Searle and Simpson were next on the list to move into 4th however he ran out of time to catch Van Horebeek for a podium spot.

A similar start in Moto 2 saw Paulin squashed in the pack but a blinding first lap rocketed the number 21 Kawasaki to 4th position, behind Cairoli.  Running a good pace Paulin kept his sites on the leaders but then he started to experience problems with the bike due to the fuel.  The issue became worse on the final laps with Paulin losing valuable positions as he nursed his machine over the finish to salvage 9th spot.

Gautier Paulin: “I like this track, and I like the hot weather, but today I’m frustrated as we had troubles with the fuel that the organizers provided to the teams, and that was dangerous. On the last lap of the second race I was unable to jump, and I think that the bike wouldn’t have done one more lap. I lost four positions and five points because of something which the team couldn’t control. My Saturday was OK with a seventh position, and my first race was also good with a fourth position. In the second race I found a good rhythm after ten minutes, but ten minutes later I started to have trouble with the bike and just did my best to salvage as many points as possible.”

Next on the MXGP calendar will be the purpose built Beto Carrero circuit in Brazil on the 30th of March but Paulin will also take the opportunity to race the Mantova Starcross in Italy next weekend.